Lebanese parish reaches out to Christian Iraqi refugees for Christmas 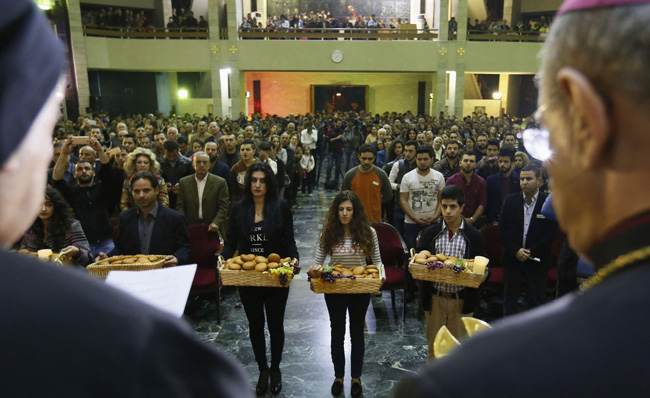 Priests offer prayers as worshippers carry bread during a Dec. 12 Mass for around 600 Iraqi Christian refugees at a church in Hazmiyeh, near Beirut. (CNS photo/Jamal Saidi, Reuters)

RABIEH, Lebanon (CNS) — The sadness behind their polite smiles was evident when they arrived on two buses for a Mass and luncheon in their honor.

As an expression of solidarity and to share the hope of Christmas, the Maronite Catholic Cathedral of the Resurrection in Rabieh, an affluent suburb north of Beirut, hosted the group of Christian Iraqi refugees.

Some of the refugees had arrived in Lebanon only days or weeks before, their hopes for a safe future overshadowed by memories of their expulsion from their homes in Mosul and the areas of the Ninevah Plain last summer, when Islamic State militants seized the areas and ordered minorities to convert to Islam, pay a protection tax, or face death.

The priests and volunteers of the parish, who together had planned every detail of the gathering for the Iraqi Christian refugees as well as other events during Advent, eagerly welcomed their guests.

“You have suffered so much,” Father Elie Sfeir, pastor of the church, said in his homily, “but do not be afraid, because Jesus is here for you.”

After the Our Father, the priest invited the Iraqi guests to recite the prayer together in their Chaldean language.

During the prayers of the faithful, Father Sfeir concluded: “Through these times of hatred and persecution, we ask you, Lord, to have mercy on all the people who were forced to leave their homeland, leaving behind them a country where they had grown, and their homes and belongings. Please, Lord, give them strength and courage to face hatred with love, betrayal with forgiveness and evil with goodness.”

Downstairs at the banquet after Mass, the volunteers and priests lavished hospitality upon their guests, serving them with smiles and engaging them in conversation. 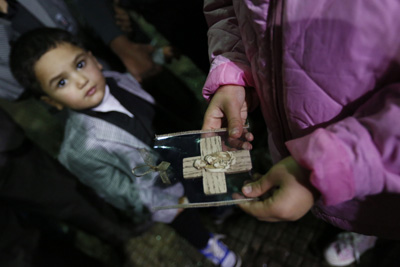 Father Sfeir noted that the hearts of his parishioners were moved with generosity when a collection for the outreach was announced.

In a festive finale after desert, with Arabic popular tunes cranked up on the stereo speakers, volunteers roused their guests for a traditional line dance. Hands joined for the step-and-stomp movements. The group snaked its way down from the stage where people had dined, amid ululating, cheers and a cascade of rose petals plucked from the souvenir flower arrangements of the Mass.

Upon leaving, each guest received a queen-sized fleece blanket and a huge sack, a care package filled with basic food staples. The next day, volunteers accompanied a nun from the Sisters of the Good Shepherd to visit an additional 30 Iraqi Christian refugee families in their dwellings in Beirut to deliver more care packages.

The Cathedral of the Resurrection will also host a Mass and Christmas party Dec. 21 for more than 100 Iraqi Christian children refugees. Specially chosen gifts will be distributed, based on the child’s age and gender.

Many of the refugees also welcomed the opportunity to share with Catholic News Service how they were forced into exile. Their lingering fear of Daesh — an Arabic acronym for the Islamic State group — still apparent, they asked that CNS not publish their real names because they still have relatives in Iraq.

Myrna and her husband came to Lebanon in October with their three children. She recalled the Sunday in their town of near Mosul when the life they had known was shattered.

They had gone to Mass that morning and had planned an outing for the afternoon, but one of their sons was sick. Instead, Myrna was preparing a big Sunday lunch when she was interrupted by a frantic phone call from her in-laws, who lived 15 minutes away.

“They said Daesh was at their front door,” she recounted to CNS.

Then, Myrna’s own neighbors started calling and frantically gathering in the streets, shouting that Daesh was coming.

“All the children and women were crying,” Myrna recalled. “We were panicking, we couldn’t think straight.”

The family grabbed only their documents when they fled their house. Their home, a decade-long project built with all the earnings from her husband’s liquor store business, had only recently been completed. The couple had intended for that home to be passed on to future generations, as is typical in the Middle East culture.

“Everything we had worked for, for 30 years, in a moment had all disappeared,” Myrna said. “Since we left our house, I cry every day. It’s a real tragedy. I never dreamed of this, that such a thing could happen.”

Before coming to Lebanon, for two months Myrna and her family sought refuge at a friend’s house in Dohuk, Iraq, with three other families who also fled their homes, none of whom had any money. Myrna’s family borrowed from relatives for living expenses and travel to Lebanon.

Traumatized by fleeing their homeland, the refugees want to think of nothing but starting a new life.

“I want to erase all the memories I have of Iraq, even the house I lived in,” Yara, a mother of three young girls from Mosul, told CNS.

“We were happy, we were going to stay there forever,” Yara explained. “Now I would never think of going back again. We Christians in Iraq consider ourselves as dead.”

Meantime, in Lebanon, she says she feels safe to go to church with her family and practice their faith.

Sadly shaking her head, one of the volunteers, Rima Hannoun, told CNS: “When I put myself in their shoes, it’s very hard, I can’t even begin to imagine their suffering. I don’t think I could bear it, even though I have a great belief in God.” 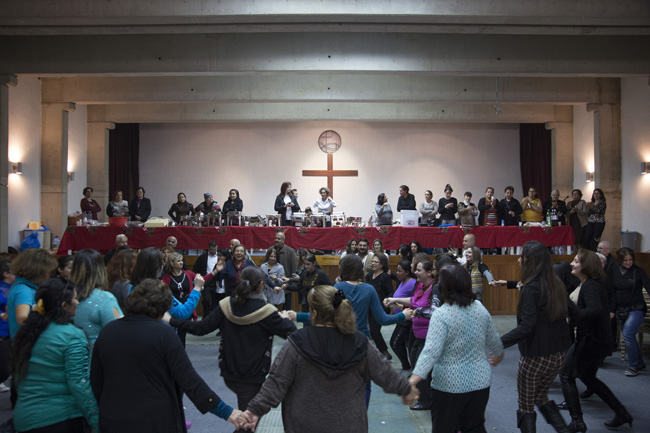 Christian Iraqis and Lebanese volunteers dance after the Dec. 11 lunch organized for Iraqi refugees at the Maronite Catholic Cathedral of the Resurrection in Rabieh, east of Beirut.