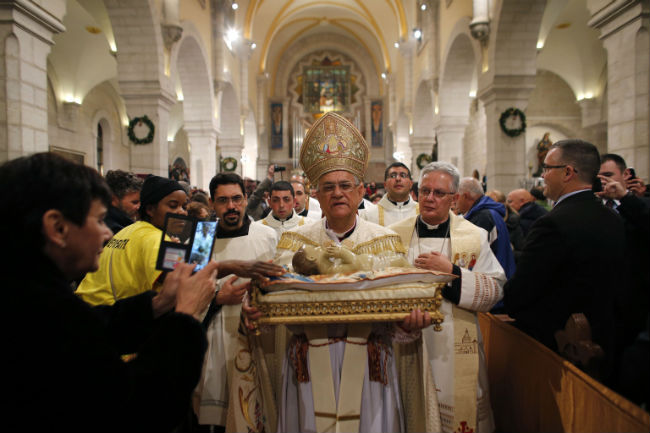 Latin Patriarch Fouad Twal of Jerusalem carries a statue of the Christ child during Christmas Mass at the Church of the Nativity in Bethlehem, West Bank. (CNS photo/Ammar Awad, Reuters) 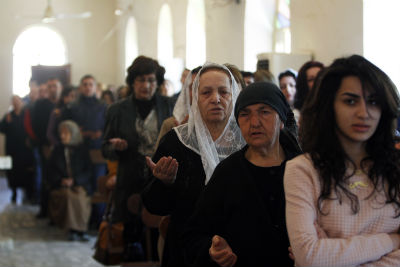 JERUSALEM (CNS) — Latin Patriarchate Fouad Twal of Jerusalem reminded the faithful of the importance of spiritual and moral salvation, which, he said, “are the basis of human progress.”

“Indeed, our sins and transgressions are the cause of our suffering and the suffering of others, with all the social and political consequences,” he said during Christmas Eve Mass at St. Catherine Church, adjacent to the Church of the Nativity. “We are often victims of selfishness, pride, passions, lies. Salvation is to be found in repentance, in asking for forgiveness, in obtaining such forgiveness and finally in conversion. Furthermore, Jesus announced the father’s mercy and his willingness to forgive.”

God wants to “heal all wounds,” he said, especially human arrogance, which he described as the source of conflict and war.

“In addition to humility, the infant of Bethlehem reminds us of the value of human life, created in the image and likeness of God,” Patriarch Twal said. “It is truly painful to know that millions of children are suffering in the world, especially in Syria, in Iraq, in South Sudan, in Central Africa, in Nigeria and in Afghanistan, and let us not forget the children of Gaza.

“They are suffering for absurd reasons, whereas they have the right to dignity, to a normal life, to be properly fed, to a home, to education, to a family who loves and supports them.”

The patriarch appealed for the reconstruction of Gaza, large parts of which were destroyed during a conflict between Israeli and Hamas forces in July and August. He also asked for more humane living conditions for Gazans.

He called on political leaders to speak against Israel’s plan to confiscate 740 acres for the construction of a separation barrier along the Cremisan Valley. It would separate 58 Christian Palestinian families from their land in Beit Jalla.

Despite the Gaza war over the summer, Israelis continue to live in “fear and insecurity,” and Palestinians continue to demand their “freedom and independence,” he said.

“The whirlwind of death continues to strike and to crush,” he said.

Jerusalem has a universal vocation of peace and happiness, he added, and Jews, Muslims and Christians must live together in the Holy Land “as equals and with mutual respect.”

“In the presence of the mystery of the Word incarnate who dwells in us, let us reflect on our situation in the Holy Land, on which today rests the gaze of the world,” he said. “The good Lord has brought together here the faithful of all three religions and calls upon them to live in harmony. There is no denying a biblical memory, first stated by God, about this land.”

Recalling Pope Francis’ stop at the separation barrier during his pilgrimage to the Holy Land in May, Patriarch Twal said his gesture would be remembered as a symbolic message for the need to bring down the walls of hatred, fear and arrogance.

NEXT: Pope urges people to hear the cry of suffering children