Pope urges people to hear the cry of suffering children 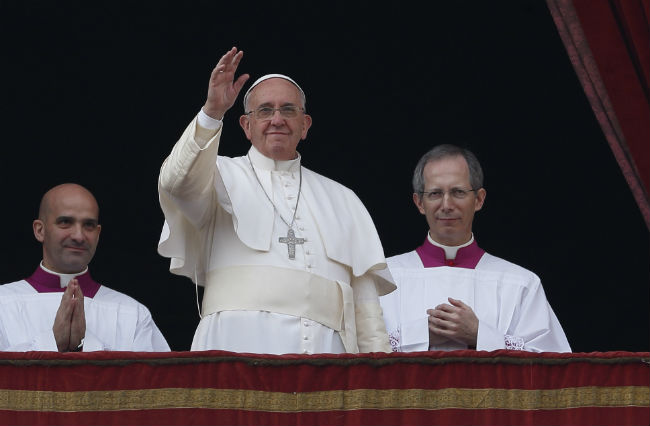 Pope Francis waves after delivering his Christmas blessing "urbi et orbi" (to the city and the world) from the central balcony of St. Peter's Basilica at the Vatican Dec. 25. (CNS photo/Paul Haring)

VATICAN CITY (CNS) — The crying of Baby Jesus is not the only cry people should hear on Christmas; many children around the world are crying because of war, maltreatment and abuse, Pope Francis said.

“Baby Jesus,” he said Dec. 25, pausing for effect. “My thoughts today go to all children who are abused and mistreated: those killed before they are born; those deprived of the generous love of their parents who are buried under the selfishness of a culture that does not love life; those children displaced by war and persecution, abused and exploited under our eyes and the silence that makes us accomplices.”

Before giving his solemn Christmas blessing “urbi et orbi” (to the city and the world), Pope Francis addressed an estimated 80,000 people in St. Peter’s Square, urging them to pray for peace in Ukraine, in the Middle East, Nigeria, Libya, South Sudan, Central African Republic and Congo.

With thousands of children looking at the Vatican’s Nativity scene and receiving the pope’s blessing with their parents Christmas morning, Pope Francis’ strongest words were about less-fortunate children.

“May Jesus save the vast numbers of children who are victims of violence, made objects of trade and trafficking or forced to become soldiers,” he said. He added special prayers for the families of the dozens of children killed Dec. 16 by a Taliban attack on a school in Peshawar, Pakistan.

“There are so many tears this Christmas, together with the tears of the infant Jesus,” he said. Children are dying “under bombardment, even there where the son of God was born. Today their silence cries out under the sword of so many Herods,” those who kill children just as Herod did in Jesus’ time.

The pope prayed that Christ’s “divine power, by its meekness,” would “take away the hardness of heart of so many men and women immersed in worldliness and indifference. May his redeeming strength transform arms into ploughshares, destruction into creativity, hatred into love and tenderness.”

In the dark of the night Dec. 24, in a St. Peter’s Basilica filled to capacity, 10 children led Pope Francis toward the altar of the church. Together they stood waiting while a lector read the solemn “Christmas proclamation,” recounting the timing of the birth of Christ in human history.

As the children from the Philippines, South Korea, Belgium, Italy, Lebanon and Syria looked on, Pope Francis removed the cloth that had been covering a statue of Baby Jesus. He bent over and kissed it gently.

In this homily, the pope said Isaiah, the Old Testament prophet, “announces the rising of a great light which breaks through the night. This light is born in Bethlehem and is welcomed by the loving arms of Mary, by the love of Joseph, by the wonder of the shepherds.”

The birth of the Son of God in a lowly manger is the sign of “the humility of God taken to the extreme; it is the love with which, that night, he assumed our frailty, our suffering, our anxieties, our desires and our limitations.”

Ever since sin entered the world, humanity was yearning for light and for peace, the pope said. The birth of Jesus revealed that “the message that everyone was expecting, that everyone was searching for in the depths of their souls, was none other than the tenderness of God: God who looks upon us with eyes full of love, who accepts our poverty, God who is in love with our smallness.”

“On this holy night, while we contemplate the infant Jesus just born and placed in the manger, we are invited to reflect,” he said. “How do we welcome the tenderness of God? Do I allow myself to be taken up by God, to be embraced by him, or do I prevent him from drawing close?”

Put more simply, he said, the key question is: “Do I allow God to love me?”

In the face of difficulties and problems, the pope said, “the Christian response cannot be different from God’s response to our smallness. Life must be met with goodness, with meekness.”

“When we realize that God is in love with our smallness, that he made himself small in order to better encounter us,” the pope said, “we cannot help but open our hearts to him, and beseech him: ‘Lord, help me to be like you, give me the grace of tenderness in the most difficult circumstances of life, give me the grace of closeness in the face of every need, of meekness in every conflict.'”

As the “Gloria” was intoned at the Mass, the bells of St. Peter’s Basilica pealed; those inside the church heard a slightly muffled version, but the thousands of people watching on video screens in St. Peter’s Square got the full effect. Later, during Communion, priests came out of the church to distribute the Eucharist to those unable to get inside.

Another musical note came in the midst of the Gregorian chant of the Creed. After the line, “For us men and for our salvation he came down from heaven,” an orchestra, conducted by Manfred Honeck of the Pittsburgh Symphony Orchestra, began playing. Chen Reiss, an Israeli soprano, sang Mozart’s “Et Incarnatus Est,” which the Vatican said was a special request of Pope Francis.

The pope and the congregation knelt as Reiss sang that Jesus, “by the Holy Spirit was incarnate of the Virgin Mary, and became man.”

Shortly before the Mass, taking advantage of the satellite link of a crew from the Italian bishops’ TV2000, Pope Francis made a telephone call to Christian refugees gathered for Mass in a camp in Ainkawa, Iraq.

“You are like Jesus on Christmas night,” he told them. “There was no room for him either, and he had to flee to Egypt later to save himself.”

“You are like Jesus in this situation, and that makes me pray even more for you,” he said. “Dear brothers and sisters, I am close to you, very close this evening. With all my heart, I am near you, and I ask Jesus to caress you with his tenderness and I ask his mother to give you much love.”

NEXT: Man who tried to kill John Paul II takes flowers to his tomb