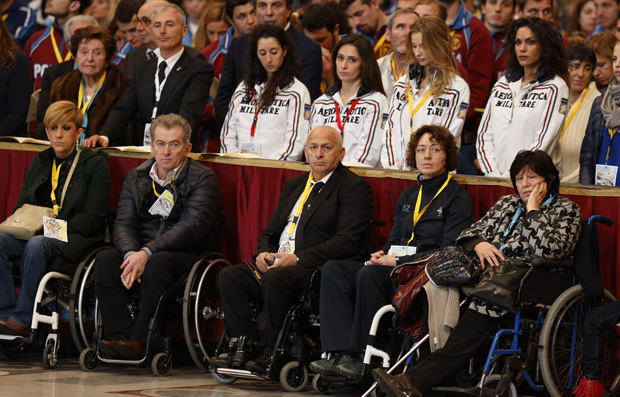 Italian Olympians and Paralympians celebrating the 100th anniversary of the Italian Olympic Committee attend an audience with Pope Francis in St. Peter's Basilica at the Vatican Dec. 19. The pope encouraged the athletes and the Olympic committee to ensure access to sports for all people, including immigrants and the poor. (CNS photo/Paul Haring)

VATICAN CITY (CNS) — Amid the chatter about the Vatican possibly hosting some Olympic events, Pope Francis wished Rome well in its bid to host the 2024 Summer Olympics, but he said with a smile, “I won’t be here.”

The 78-year-old Pope Francis made the comments Dec. 19 during an audience with members of the Italian Olympic Committee and Italian Olympians and Paralympians celebrating the 100th anniversary of the committee.

Joining the sports enthusiasts in St. Peter’s Basilica after a Mass celebrated by Cardinal Gianfranco Ravasi, president of the Pontifical Council for Culture, Pope Francis encouraged the athletes and the Olympic committee to ensure access to sports for all people, including immigrants and the poor who live on the outskirts of Rome and other big cities.

Just like Olympic-class athletes, people with different abilities and from different backgrounds “need spaces to meet, socialize, share and play,” he said.

The Olympic motto, “Citius, altius, fortius” (Faster, higher, stronger), is not a call for one nation to dominate another or the criteria for excluding the weak, Pope Francis said, it is a call to all human beings to work hard and sacrifice “to reach important goals in life, accepting one’s limits without being blocked by them, but trying to overcome them.”

Many saints, he said, have used language more often used by athletes, terms like “passion, enthusiasm, constancy, determination, struggle and limits,” to describe the qualities needed to reach the ultimate finish line, heaven.

The pope quoted the First Letter of Timothy, “While physical training is of limited value, devotion is valuable in every respect, since it holds a promise of life both for the present and for the future.” 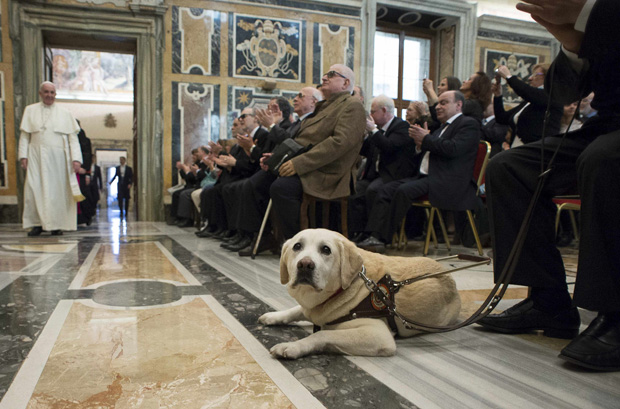 A guide dog is seen as Pope Francis arrives to attend a special audience with Italian Blind Union at the Vatican Dec. 13. (CNS photo/L’Osservatore Romano via Reuters)

NEXT: Pope: Don’t miss Christ this Christmas; take time, be ready, let him in