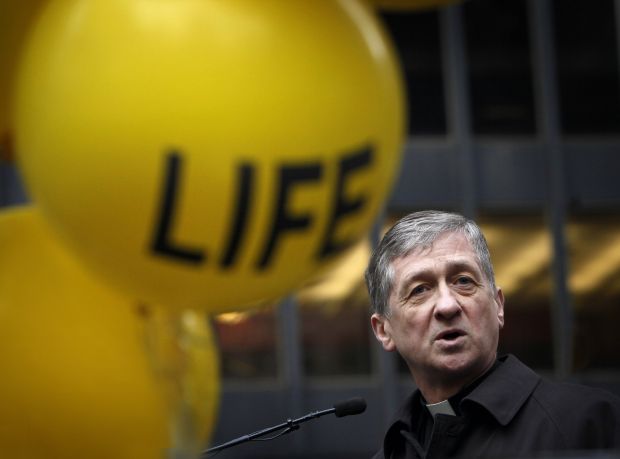 CHICAGO (CNS) — Chicago’s new archbishop told the crowd gathered for the March for Life Chicago Jan. 18 that the pro-life movement wants “to make sure that everybody has a place at the table.”

“It’s not about criticizing or judging or condemning, it’s about accompanying one another because that’s what life is all about — living in community,” Archbishop Blase J. Cupich said.

“We are here as an invitation so that others come and join us,” he added.

More than 3,500 people participated in the event, held in advance of the national March for Life planned for Jan. 22 in Washington, marking the anniversary of the U.S. Supreme Court’s Roe v. Wade decision that legalized abortion virtually on demand.

In Chicago, the march began with a rally in Federal Plaza, followed by participants walking through the Loop — the city’s central business district — to the James R. Thompson Center for a closing rally.

In his remarks at the first rally, Archbishop Cupich said: “We’re here because to march means we can’t sit still. We can’t sit still and let another day go by without bringing to the attention of everyone that there are those who are struggling — literally struggling — to come into the world.”

“We are here to do everything possible to make sure that their right to life is preserved,” he said.

Participants came from throughout Illinois, Wisconsin and Indiana.

In promoting this year’s event, organizers said in a statement that one aim was to “to show that one of the most pro-abortion cities in the country can lead one of the most successful, fun and loving marches to defend pre-born children and their mothers.”

“Remember Illinois’ politicians are watching us. We need your help to show them how strong the Illinois pro-life movement is,” it said.

PREVIOUS: ‘We shall overcome’ in fight against abortion, says Cardinal O’Malley

NEXT: Everyone must help create culture of life, says president of March for Life