‘We shall overcome’ in fight against abortion, says Cardinal O’Malley 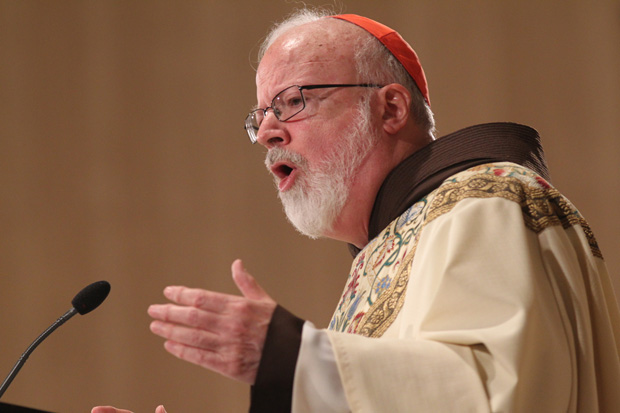 Boston Cardinal Sean P. O'Malley gives the homily during the opening Mass of the National Prayer Vigil for Life at the Basilica of the National Shrine of the Immaculate Conception in Washington Jan. 21. The all-night vigil is held before the annual March for Life, which this year marked the 42nd anniversary of the Supreme Court's Roe v. Wade decision that legalized abortion across the nation. (CNS photo/Bob Roller) 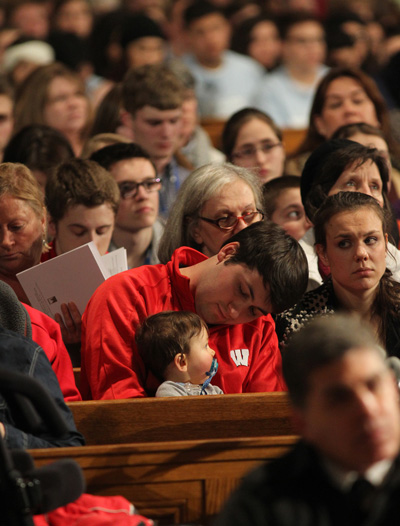 A young man holds a child during the opening Mass of the National Prayer Vigil for Life at the Basilica of the National Shrine of the Immaculate Conception in Washington Jan. 21. (CNS photo/Bob Roller)

WASHINGTON (CNS) — Evoking a phrase long associated with the civil rights movement, Cardinal Sean P. O’Malley of Boston told an overflow crowd in Washington that “we shall overcome” in the fight against abortion.

Quoting Pope Francis in his homily Jan. 21 during the opening Mass of the National Prayer Vigil for Life, Cardinal O’Malley said, “The church cannot and must not remain on the sidelines in the fight for a better world.”

He added, “In our country, people have come together in the fight to overcome racism” and other social ills. “The quest for human rights and solidarity brought together people of faith to ‘repair the world,’ to use the Jewish expression.”

Now, Cardinal O’Malley said, the fight is for the right to life, “and we shall overcome,” he said to applause from a crowd of more than 11,000 at the Basilica of the National Shrine of the Immaculate Conception in Washington.

Without saying so directly, Cardinal O’Malley’s use of the phrase as the linchpin for his homily might have come from a phone call from Oprah Winfrey.

The cardinal and some priests were eating dinner at a diner near the Cathedral of the Holy Cross in Boston when the call came. “I presumed it was a telemarketer,” Cardinal O’Malley said, but Winfrey called to thank him for some comments he had made in an earlier blog posting about the movie “Selma,” of which she was one of the producers and had a featured role.

The comment focused on “how every person was made in the image and likeness of God,” Cardinal O’Malley said, a point often made in the pro-life movement.

The cardinal, who is chairman of the U.S. bishops’ Committee on Pro-Life Activities, used his homily to take apart some “American mythology” about abortion. The three biggest myths, he said, are that abortion is a woman’s issue, that most Americans “are pro-choice, pro-abortion,” and that “young people are overwhelmingly in favor of the pro-abortion position.” 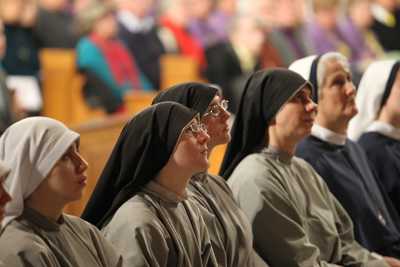 Nuns listen to the homily during the opening Mass of the National Prayer Vigil for Life. (CNS photo/Bob Roller)

But polling over the past 20 years, according to Cardinal O’Malley, shows “women have consistently been more pro-life than men.” By supporting abortion, he said, “men rationalize their irresponsibility” and push women to abort their unborn child, “threatening to abandon her if she ‘chooses’ to gives birth. … An abortion is a bargain compared to monthly child-support payments.”

On the second myth, Cardinal O’Malley quoted outgoing NARAL Pro-Choice America president Nancy Keegan said “there is a large intensity gap” among supporters of legal abortion and their foes.

And young people, the cardinal added to applause, “are the most pro-life segment of the American people.” Five years ago, the Gallup organization “declared pro-life is the new normal,” Cardinal O’Malley said. “Congratulations, young people — you’re normal.”

Worshipers did not seem to be bothered by the mixture of light rain and fluffy snowflakes that descended on Washington the afternoon of the Mass. Nor did they seem thrown by the Mass starting a half-hour earlier than in past years. The shrine was filled to the brim; even an hour before the scheduled 6:30 p.m. starting time, an usher asked a worshiper as he left the shrine’s vestibule to enter the church, “Do you have a seat, sir?” 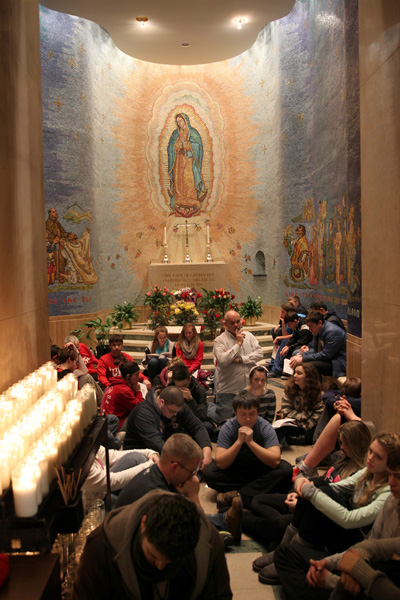 Young people and others sit on the floor in the chapel of Our Lady of Guadalupe during the opening Mass of the National Prayer Vigil for Life at the Basilica of the National Shrine of the Immaculate Conception in Washington Jan. 21. (CNS photo/Bob Roller)

More than 1,000 bishops, priests, seminarians, novices and servers took part in the 42-minute entrance procession. And they all had a chair on which to sit in the shrine’s massive sanctuary — which itself has the interior space of a medium-sized suburban church. There also was sufficient seating space in the sanctuary for several dozen nuns and select laypeople.

After the Mass, confession was offered from 9:30 to 11:30 p.m. in Our Lady of Hostyn Chapel in the lower level of the national shrine.

Pittsburgh Bishop David A. Zubik led those who stayed on in the National Rosary for Life in the Crypt Church. Bishop Kurt R. Burnette of the Byzantine Eparchy of Passaic, New Jersey, led a night prayer in the church with Bishop Edward B. Scharfenberger of Albany, New York, as homilist.

NEXT: Archbishop says pro-lifers want everybody to have ‘place at the table’