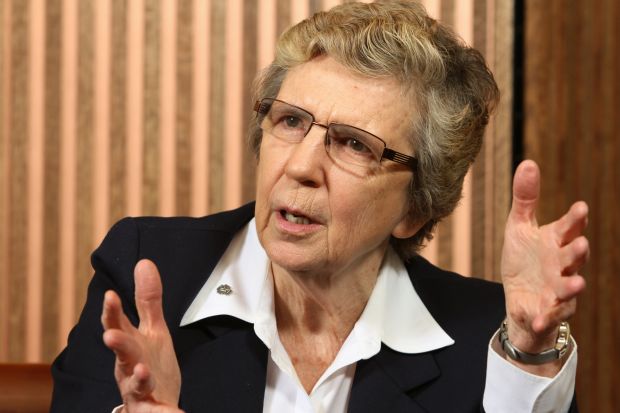 Sister Carol Keehan, a Daughter of Charity who is president and CEO of the Catholic Health Association, is pictured in this 2013 file photo.

WASHINGTON (CNS) — If the U.S. Supreme Court strikes down federal subsidies that have helped millions of people get health care coverage under the Affordable Care Act, it will be “an incredible cruelty,” said the president and CEO of the Catholic Health Association.

“(If) you are in any state of the union and you are talking to people who work for a living, who wait on us, cut our hair, drive our taxis, they will tell you this has been life-changing for them,” Sister Carol Keehan said about the federal health care law.

Sister Carol, a Daughter of Charity, made the comments on the same day CHA filed a friend-of-the-court brief in the case of King v. Burwell. The Supreme Court will hear oral arguments in the case in March with a decision expected in June.

Since the health care law requires all Americans to have insurance, the subsidies help make coverage more affordable for individuals and families whose health care is not covered by their employer.

The plaintiffs in King v. Burwell argue that the law allows federal subsidies only in those states that run their own health insurance exchange, or marketplace, and that the subsidies cannot be used in the 37 states where those marketplaces are run by the federal government.

The subsidies are provided in the form of tax credits for those who cannot afford health insurance but who make too much to qualify for Medicaid, the federal-state program that helps pay for health care for the poor and disabled.

“Almost 10 million people who got insurance coverage would lose it if this subsidies issue gets decided the wrong way,” Sister Carol said. “That is an incredible cruelty, to take people who waited so long and finally got coverage and then yank it out from under them because they are in a state where the exchange is run by the federal government instead of their state. … It will have profound consequences on their health and the health of their community.”

She said the majority of those who would be affected by a decision to overturn the subsidies work full time or part time.

“These are not the lazy people who want to make a living off of government funding,” she said. “These are the hard-working people who wait on us, who love their families, who want their children to be well cared for. This is a moral victory that nation recognizes that. We should not step back from that.”

In its brief, the CHA said that to revoke the subsidies would be a misinterpretation of the law.

“A statute’s text must be considered not in a vacuum, but with reference to the statutory context, structure, history, and purpose,” it said. “The subsidies under the ACA are integral to the law’s effectiveness and designed to help the most vulnerable in our society obtain health insurance.”

The brief also argued that ending the subsidies would have a detrimental effect on health care providers and communities and bring uncertainty and confusion to the health care system.

NEXT: Cruel and unusual? High court to rule on lethal injections