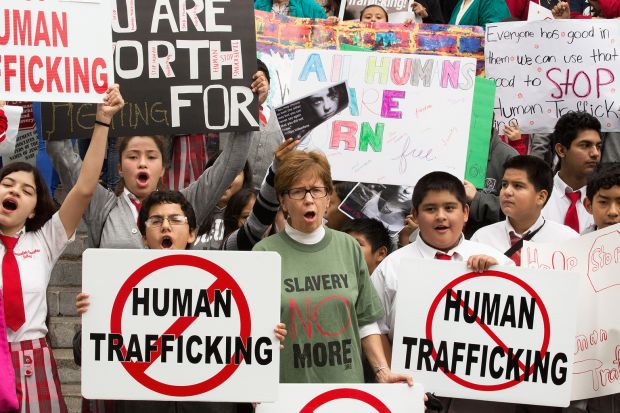 WASHINGTON (CNS) — “Critical to winning this battle” against human trafficking is “the ability to disrupt (its) business model,” a former Marine Corps general said at a media briefing Jan. 29 in Washington.

He spoke at a briefing where a coalition of representatives from the business, legal and nonprofit sectors came together to announce a new initiative to combat the global industry created by human trafficking.

The Campaign to Disrupt the Business of Modern Day Slavery is an initiative coordinated by Human Rights First, a nonprofit that emphasizes the promotion of human rights worldwide and seeks to engage organizations and institutions in efforts to “disrupt the business of human trafficking.”

The campaign’s mission statement states that it intends to do this through “increasing the risk to perpetrators and diminishing their profits. Through cooperation between the U.S. government, private sector, and civil society, we will press for increased prosecutions and more robust criminal asset forfeiture proceedings, targeting the enablers and participants in this criminal enterprise.

According to numbers from Human Rights First, there are an estimated 20.9 million victims of worldwide human trafficking today and the industry itself generates $150 billion every year.

“This campaign is not a hundred-yard dash; it’s a marathon,” said Krulak in his opening statement. He is a former Marine commandant and currently president of Birmingham-Southern College in Alabama.

Human trafficking is “a many-headed problem” said Massimino in discussing how the campaign’s “particular approach” seeks to address the problem from several different angles such as public awareness, private sector engagement and criminal prosecution.

The groups focus on financial disruption versus simple awareness, prosecution or victim care alone is important because “even if you prosecute and arrest all the perpetrators, others will eventually take their place” unless the risk versus reward ratio is altered, according to Birmingham Mayor William Bell.

A large focus of the discussion was on the implications of human trafficking for the private sector.

“Legitimate businesses have not only a moral imperative in this fight, but also a compelling practical interest,” said Lagon. “Several businesses stand to have their brands damaged as well as to be at risk for legal liabilities … so corporations need to develop best practices in supply chain management” to ensure that their products are “not tainted by slavery.”

According to Lagon, “the idea that a corporation’s moral and practical business interests are somehow divorced” from one another is nothing but a “false dichotomy.”

“Most businesses want to do the right thing; businesses are run by human beings,” said Della Badia, agreeing with Lagon. In a “world of transparency” where business practices can rarely escape the scrutiny of a cursory Internet search, she said, “companies want to develop best practices and demonstrate integrity” through such things as employee engagement, because “it can help companies be more aware and implement better business models.”

Laurel Bellows, former president of the American Bar Association, told Catholic News Service that “the ABA has been very active” in the fight against human trafficking and she believes that “the removal of the profit motive in human trafficking is the most effective way to move perpetrators out of the practice.”

“What makes this crime different than most others,” Bellows added, “is that for most other crimes, the victims are visible and at some point, the nature of modern-day slavery hardens its victims,” thereby making transition and recovery difficult for many affected by the practice.

In a conversation about the nature of caring for survivors of human trafficking, Lungren told CNS about his personal experiences. While in Congress, he sponsored legislation to combat human trafficking and held field hearings on the issue.

“There is a great deal of difficulty in providing new occupations and alternatives for survivors,” he said. “The problem with this practice is that so many of these people, especially women, are taken at such a young age, that the only person that they can learn to trust is the person who is exploiting them.

“What I encountered is that many who are extracted have developed almost a ‘Stockholm-like’ syndrome for their captors,” added Lungren, a Catholic.

“Together,” the campaign’s closing statement reads, “we pledge to put our individual and collective energies and influence behind a major public education and advocacy effort to disrupt the business of human trafficking.”

The Catholic Church has put a spotlight on the global human trafficking crisis by declaring the first International Day of Prayer and Awareness against Human Trafficking. It will take place Feb. 8, the feast of St. Josephine Bakhita, a Sudanese slave who eventually was freed and became a Canossian nun.

PREVIOUS: New film ‘Black or White’ aims to ‘start the conversation’ on race