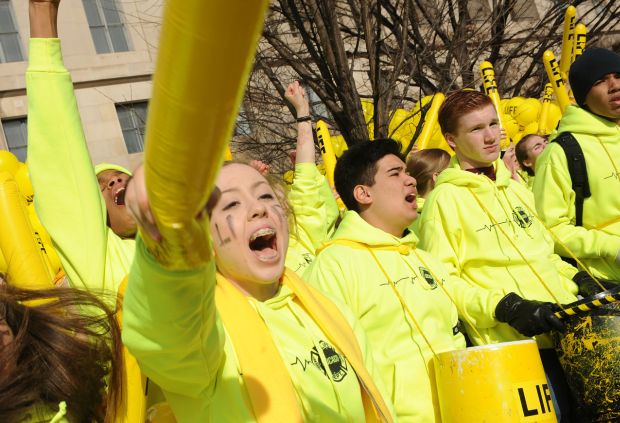 Young people from the Archdiocese of Chicago dance and sing in a group along the March for Life route to the U.S. Supreme Court building in Washington Jan. 22. (CNS photo/Leslie E. Kossoff)

WASHINGTON (CNS) — The 42nd annual March for Life and rally in Washington is twice as old as its crowd of predominantly college and high school age students. And as each year’s turnout seems younger, so do the day’s tools.

Participants at the Jan. 22 event not only met up by texting or calling each other on their cellphones, they also shared their experiences of the day — and explained reasons for making the trek either across town or across country — by posting lots of photos on Twitter, Facebook and Instagram.

Many began documenting their experience days before the march with posts from their buses or rest stops along the way. On the day of the march, there were online images from pre-march rallies, groups huddled on the National Mall or taking up a huge swath of Constitution Avenue as they made their way to the U.S. Supreme Court.

The photos included group selfies, pictures with bishops and even with a cardboard cutout of Pope Francis. Images indicated the cold and predominantly cloudy day showing coats, hats and scarves (often matching) and gloves. The cause was also front and center with most groups carrying placards with phrases such as “I am the Pro-Life Generation,” “Defend Life” or “#TeamLife.”

Long gone are the days when March for Life participants who got separated from their groups had to wait at an assigned meeting spot at the end of the day to reconnect. What also would be inconceivable for today’s marchers is the idea that you wouldn’t see pictures of yourself on the National Mall with your friends until you got home and developed rolls of film from the day.

But this ease of sharing photos and connecting is not the only plus side of cellphones and social media use for these marchers. For many, this technology is a way to further spread their message.

Just by standing with the crowds of tens of thousands, participants expressed their opposition to the Supreme Court’s 1973 Roe v. Wade decision that legalized abortion. But many of them took this stance a step further by telling the online world why they were there. Under the Twitter hashtag #Whywemarch they posted their reasons for coming in 140 characters or less or posted photos of themselves holding handwritten signs that explained their reasons.

Many people who could not join the march also tweeted their support and wishes that they could have been there.

Pro-life advocates urged participants to tweet their representatives and senators and a few senators tweeted their support to the marchers, including Sen. Marco Rubio, R-Florida, with this message: “Need to warm up after the #marchforlife? Head over to @marcorubio’s office for coffee at 284 Russell Senate Office Building.”

Based on Twitter feeds during the march, there was not much reaction to a Senate action early that afternoon passing a bill to restrict taxpayer funding of abortion. The decision, announced by The Associated Press at 1:20 p.m., may have appeared on the screens of some of the marchers’ cellphones, but they might not have been paying attention, focused on the march at hand or simply on staying warm.

The extremely festive feeling of the march as it appeared on social media — including pictures of cute kids and college students juggling in the street — may have belied the seriousness of the pro-life cause the participants were in town to rally around.

But one tweeter put the day and its happy crowd in perspective with this message: “The #MarchforLife is an unbelievable mix of sorrow at the crime that brought us here, joy in seeing friends & hope at the #ProLifeGeneration.”

NEXT: New alliance aims to create culture of life across all walks of life