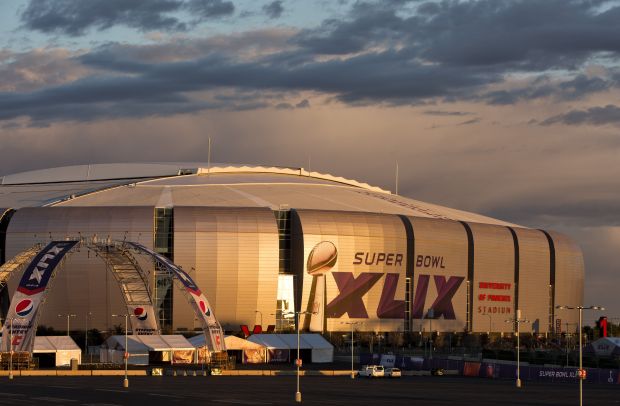 University of Phoenix Stadium in Glendale, Ariz., seen Jan. 21, is readied for Super Bowl XLIX, the Feb. 1 match between the Seattle Seahawks and the New England Patriots. Catholic Charities of Arizona is preparing to serve an increased number of sex-trafficking victims arrested by local police in the days surrounding Super Bowl Sunday. (Nancy Wiechec)

“People who are controlling sex-trafficked women are opportunistic,” said Jon McCaine, a clinical psychologist and consultant for Catholic Charities’ Dignity program for victims of sex trafficking. “The Super Bowl is a perfect time for these people to make money by selling sex,” he said in a January statement from the Catholic agency.

The Phoenix metro area was bracing for a surge in visitors as it got ready to host a triad of large sporting events within an eight-day period. The NFL’s Pro Bowl and Super Bowl XLIX and the Waste Management Phoenix Open golf tournament were all set to take place there Jan. 25 through Feb. 1.

McCaine, who has been working with victims of sex trafficking for more than 20 years, said he believes sex transactions around the Super Bowl would occur in quiet neighborhoods in homes leased to visitors.

“We live in a culture of excess, and the supply and demand for sex will be high,” he said.

Money spent by the NFL and Super Bowl visitors alone was expected to reach $300 million. The total economic impact on the Phoenix area was estimated at $500 million.

Although firm evidence of a correlation between the Super Bowl and an uptick in prostitution is lacking, a 2014 study by Arizona State University’s School of Social Work found that the game produces conditions that traffickers seek to exploit, mainly an increased concentration of people in a relatively limited geographic area and an atmosphere “where recreation and self-satisfaction are common and the availability of discretionary income is increased.”

In 2013, the city of Phoenix established a human trafficking task force charged with creating a “game plan” for a safe Super Bowl. The published plan said that despite an overall drop in crime in Phoenix, the rate of cases involving child prostitution and trafficking victims was rapidly increasing.

The Dignity prostitution-diversion program offers emotional support, counseling, addiction recovery, education and job placement assistance to help women and men out of prostitution and into lawful livelihoods. It includes a 36-hour intensive course as well as weekly support groups and individual case management.

Catholic Charities said its well-established 30-year-old program would be ready for any victims that want out of the sex trade.

In the last fiscal year, 222 people referred by the Phoenix prosecutor’s office went through the Dignity program. It has a high success rate. According to Catholic Charities, 86 percent of participants do not re-offend.

Under arrangement with the prosecutor, those arrested for prostitution may agree to the Dignity program instead of going to jail. Catholic Charities also hosts outreach events where victims of sex trafficking can come directly for help.

Cathy Bauer, senior program supervisor for Dignity, said their efforts are built on the belief that people involved in prostitution are looking for a way out.

“The goal of the program is to give prostituted people the help needed to break away from the vicious cycle of prostitution and rebuild their lives,” she said.

But breaking that cycle is not easy and McCaine said there are many public misconceptions about sex trafficking.

“Most people believe that these women choose to live this life. It’s not a choice,” he said. “Most come from extreme abuse situations and the women are desperate. They have limited options and at that point morality becomes a luxury. Women turn on survival mode.”

“It is very difficult for victims of any age to break out of this lifestyle,” Bauer agreed. “The shame and hopelessness alone that one carries from this lifestyle can keep individuals stuck for years.”

NEXT: Crowd’s March for Life tweets prove it’s not their grandparents’ event