Forum focuses on Pope Francis’ renewed emphasis on the poor 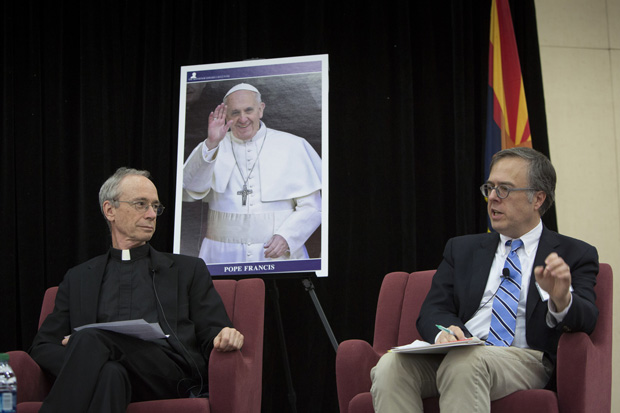 PHOENIX (CNS) — Leaders in the realm of social and economic justice pointed to Pope Francis as kick-starting a renewed focus on the poor, praising his approach and message.

The pope’s emphasis on Jesus’ mission of bringing “good news to the poor, liberty to captives, new sight to the blind and to set the downtrodden free” can guide people today, John Carr, director of the Initiative on Catholic Social Thought and Public Life at Georgetown University, told an audience of nearly 500 during a Jan. 6 forum on economic justice.

“That is our mission today. It is not new. However, Pope Francis has brought new urgency, new passion, and I would suggest, new authenticity to this mission,” Carr said during the event at Brophy College Preparatory hosted by the Phoenix Jesuit community and the Monsignor Edward J. Ryle Fund of Phoenix.

The fund honors the legacy of the advocate priest who directed the Arizona Catholic Conference for nearly 20 years. Msgr. Ryle died in 2005.

In moderating the discussion, Jesuit Father Thomas Reese said that despite recent signals showing an improving U.S. economy, the news is not all good.

“Although the American economy appears to be on the mend after the Great Recession, the problem of economic injustice is still with us,” he said. “The stock market has rebounded, but middle-class salaries have stagnated for those lucky enough to still have one of those jobs.”

Carr underlined the thoughts of Pope Francis on the topic by quoting “Evangelii Gaudium” (“Joy of the Gospel”), the pope’s 2013 apostolic exhortation.

“Just as the commandment ‘Thou shalt not kill’ sets a clear limit in order to safeguard the value of human life, today we also have to say ‘thou shalt not’ to an economy of exclusion and inequality. Such an economy kills,” he said.

Continuing to echo the pope’s words, Carr said the greatness of a society is measured by how it treats those most in need.

“These are not the priorities of the Senate Finance Committee or the (House) Ways and Means Committee in Washington,” Carr said.

“Growth in justice requires more than economic growth,” he said. “It requires decisions, programs geared to a better distribution of income, the creation of sources of employment and an integral promotion of the poor.”

Two other panelists, including a Catholic sister who works in Washington as a social justice lobbyist, and an evangelical journalist, agreed, saying that Pope Francis has set a path for the world to follow in responding to the needs of suffering people.

Sister Simone Campbell, a Sister of Social Service and executive director of the Catholic social justice lobbying group Network, encouraged the reading of “Evangelii Gaudium,” calling it compelling and candid.

Sister Simone shared a few of stories she heard while taking part in Network’s “Nuns on the Bus” campaigns, including one of a woman who had a full-time job but still could not afford rent and lived in a homeless shelter. And also, the story of a young competitive entrepreneur who believed that the only measure of success is earning more money.

“We are trapped in an economy where we measure our worth by our money,” Sister Campbell said. “And that is sapping the life out of us. We the people need to find another way out of that measure of success,” she said.

Michael Gerson, an evangelical Christian who writes a syndicated column on social issues and is a fellow at ONE, an organization working to end extreme poverty and preventable diseases around the world, said many political attempts have been made to capture the essence of Pope Francis.

“In reality, Catholic teaching stands in judgment on both sides of U.S. politics, as one would expect of a faith that combines moral traditionalism with a robust belief in social justice.”

He said the pope has “mad political skills” that have made his first two years as pope “some of the most consequential in the modern history of the Christian church.”

“When he was chosen, the narrative about the Catholic Church could hardly have been worse — sexual misconduct, financial mismanagement, the arrest of the pope’s butler — the Holy Spirit seemed to be on an extended vacation,” Gerson said.

“That narrative has utterly changed. This is more than PR, but he knows how to communicate.”

Gerson compared Francis’ actions to those of Christ’s, calling the pope, like Christ, a “disruptive force.”

“Francis has not changed the catechism, but he has created a zone for the merciful application of pastoral teaching,” he said.

PREVIOUS: Reflection on ‘racial divide’ in U.S. is personal for Illinois bishop