Many see Rev. King’s vision ‘still in process of coming true’ in U.S. 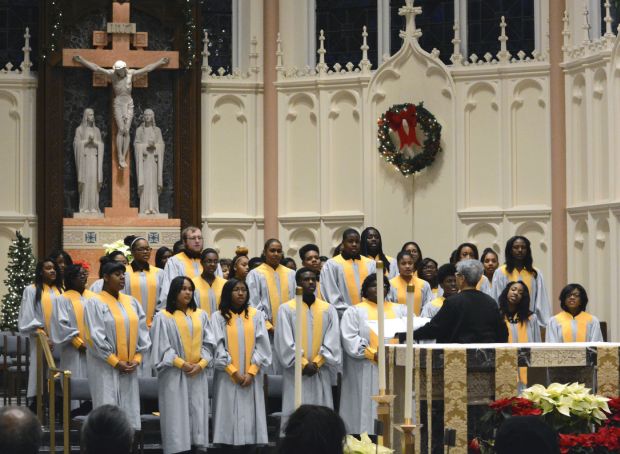 GARY, Ind. (CNS) — For young Jaymee Dixon, the tribute to the Rev. Martin Luther King Jr. at Holy Angels Cathedral “means a lot. It feels great to be a black person doing something.”

Dixon, 15, is a member of the Wirt-Emerson Concert Choir that performed at the eighth annual King tribute at the cathedral Jan. 11. The high school student said black history today is loaded with stories of young black people dying.

The cathedral event was held in observance of Rev. King’s birthday, Jan. 15. The federal holiday marking his birthday this year is Jan. 19.

Joyce F. Gillie Cruse, guest speaker at the tribute, addressed those deaths, some of which have become household names, including Trayvon Martin, Michael Brown and Ferguson, Missouri.

Noting how Rev. King’s fight for all races and against a system that promotes racism and racial divide, Gillie Cruse said Rev. King’s “vision is still in the process of coming true” decades after the civil rights leader was slain in 1968.

Recalling the recent deaths of young black males, Gillie Cruse said, “There is something wrong in this country.”

While many in this country have blamed police actions for these deaths, Gillie Cruse said there are other issues to be addressed — issues that “make black males an endangered species.”

These issues, Gillie Cruse said, include a low percentage of black voters, black teen homelessness, failing school systems, high crime rates, and unemployment or jobs that do not pay a living wage. Also, she said, only 26 percent of African-Americans get married.

“We have some serious issues, and it’s not just the police,” Gillie Cruse said.

An adjunct professor at Xavier University and Loyola University in New Orleans, Gillie Cruse previously served in the Diocese of Gary, working with Gary cluster parishes on adult faith formation and evangelization.

“We need to do something,” she said. “What are we going to do for our children, to help them see a good future? We must re-assess the balance of our society and think out of the box.” 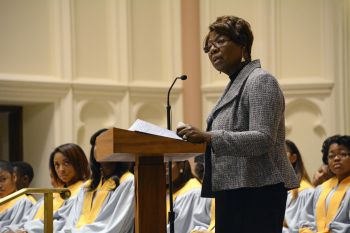 In short, Gillie Cruse said, “Do more than hear a speaker.”

Gillie Cruse encouraged her audience to “meet somewhere” to discuss challenges in society. “Do what you can to address these issues.”

Father Mick Kopil, rector of Holy Angels Cathedral, recalled the words of Blessed Paul VI, who said there can be no peace without justice. The Sunday afternoon tribute, Father Kopil said, honors the memory of a man “who worked among us for peace and justice.”

Father Charles Mosley, pastor at Our Lady of Perpetual Help in Hammond, noted a recent interview with civil rights leader Andrew Young, who said that Rev. King’s mission was not so much about changing the world as it was about changing a reality “of how African-Americans are seen.”

Citing low black voter turnout in the last election, Father Mosley said, “We need to change our reality, so we can move forward.” Instead of talking about racism or black lives lost at next year’s King tribute, the Hammond pastor said people should discuss their accomplishments and additional work to be done.

Father Mosley prayed for “new hope, new light” to help achieve Rev. King’s vision. “Bless us, guide us, help us become all you want us to be, so we can give glory to your name.”

In Jan. 16 statement released in Washington, the president of the U.S. Conference of Catholic Bishops called on communities to strive to live the words of Rev. King, who urged the nation to move “from the quicksand of racial injustice to the solid rock of human dignity.”

“Our communities will only reflect this dignity if we first turn to prayer to guide our actions toward ending years of isolation, disregard and conflict between neighbors,” said Archbishop Joseph E. Kurtz of Louisville, Kentucky. “That which seems impossible can only be brought about through God and his powerful intervention in our hearts.”

He expressed gratitude for Rev. King’s work and the efforts of so many others on behalf of justice and to advance “our country’s recognition of the dignity and equality of each person.”

“Continuing tensions and violence in our communities remind us that although significant progress has been made in erasing the stain of racism and the cycle of related violence, we still have much work to do,” Archbishop Kurtz said.

“As we consider the gains of the past and the challenges before us, I urge each of us to pray for healing and peace as we work for ever greater communion. Every human life has profound dignity, rooted in our creation in the image of God. We are one family,” he added.

In a Jan. 14 column, Philadelphia Archbishop Charles J. Chaput wrote that the annual King observance is much more than a celebration of the civil rights leader’s service on behalf of the nation’s black community and other ethnic minorities. It’s also, he said, “a celebration of the power of religious faith working through believers who open themselves selflessly to that which God calls them to do in the world.”

“More than 50 years have passed since Martin Luther King Jr. stepped into America’s racial divide of the 1950s and 1960s. Although that divide has eased in some important ways, recent events show that much remains to be done,” the archbishop said in his column, posted on CatholicPhilly.com, the Philadelphia archdiocesan news website.

This year’s King observance “comes at a key moment,” he continued. “We should take advantage of it by reflecting on why King’s efforts to fight racial injustice bore such good fruit, and what his witness means for the United States today.

“It’s a moment for those of us who are Christians to re-examine our own lives in light of the Gospel, and to ground ourselves again in the same word of God that gave Martin Luther King the courage and perseverance to seek healing where sin had wrought racial conflict.”

In today’s secular society, “people can too easily forget” that Rev. King’s pursuit of justice for minorities “was fundamentally Christian,” Archbishop Chaput said. “The inspiration for his activism came not from a devotion to any political party or even set of public policy solutions, but rather from his understanding of Christian discipleship.”

He urged that celebrating the King holiday not only pay tribute to Rev. King’s “great service” but also be a reminder of the power of religious faith and the selfless acts that God calls all to undertake, “even when it involves suffering, difficulty and sacrifice.”

Euvino is a staff writer at the Northwest Indiana Catholic, newspaper of the Diocese of Gary.