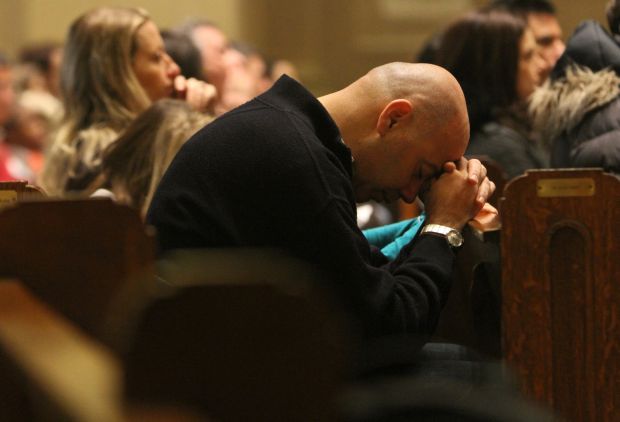 A man prays during a French-language Mass at Notre Dame Church in New York Jan. 11. The Mass was offered for the 17 victims of the recent terror attacks in France. (CNS photo/Gregory A. Shemitz)

“Everybody knows somebody who was involved in the massacre. They’re stunned, they’re searching and they don’t know what to do,” Msgr. John N. Paddack told Catholic News Service after Mass Jan. 11 at Church of Notre Dame in Manhattan’s Morningside Heights neighborhood.

The parish is the center of the Francophone Catholic community in New York.

The parish includes French nationals and Catholics of West African heritage from throughout New York City and the suburbs. Many of the worshippers at the Mass gathered for the first time since returning from Christmas home leave in France.

Msgr. Paddack, parish administrator, led a prayer of condolence for the families of the victims and solidarity with all those touched by the incidents. “May the French be assured of our prayers and thoughts in this difficult time and the concern of all in the free world,” he said.

Seventeen people died during three days of attacks in Paris, including an initial deadly assault by gunmen on the editorial offices of the satirical weekly newspaper Charlie Hebdo. The paper published caricatures of the prophet Muhammad.

“People are asking for Masses and prayers and some will attend the Holy Hour in honor of Our Lady of Lourdes,” Msgr. Paddack said.

There is a full-size replica of the Grotto at Lourdes, France, behind the main altar at the church. In 1858, the Blessed Mother appeared to Bernadette Soubirous and two other children in a rock cave near Lourdes.

At Notre Dame, three dozen children in the first Communion preparation program sat in front of the pulpit as Msgr. Paddack described in French the significance of the baptism of Jesus by John the Baptist as told in the Gospel of Mark for Jan. 11.

Msgr. Paddack anticipated that the violence in France will bring some people back to church.

“Today I saw people who hadn’t been here in a while and I’ll probably do grief counseling during the week,” he said. He is a counselor and psychologist, with experience in other traumatic situations, including the Sept. 11 attacks in New York.

“The feeling of being overwhelmed is somewhat akin to 9/11. It brought back feelings I had then, but they’re not as intense,” he said. In 2001, Msgr. Paddack was a teacher at a high school in Staten Island, a borough heavily affected by the attacks on the World Trade Center.

Every summer, Msgr. Paddack serves at Notre Dame de Lorette Church in Paris, not far from the Charlie Hebdo newspaper office where two Muslim brothers forced their way in and killed 12 people. He said French friends there are “totally taken aback.” In addition, his colleagues in Spain and England are “very much afraid” of similar violence.

Msgr. Paddack said he read Charlie Hebdo occasionally when he was a student in Paris. “Someone would press it into my hand on the Metro. I didn’t like it, but I would support their right to have it,” he said.

Francoise Cestac, a member of the parish council at Notre Dame in Manhattan, said although it is difficult to consider now, “As Catholics, we should think of forgiveness at a later stage. It’s a basic principle of Catholic teaching.”

“We have to fight fanaticism in general,” he said, “and we are united in our prayers during this period of mourning.”

NEXT: Romero scholars say his role as crusader for poor was slow evolution