Roe said to turn ‘beautiful truth’ about human dignity ‘inside out’ 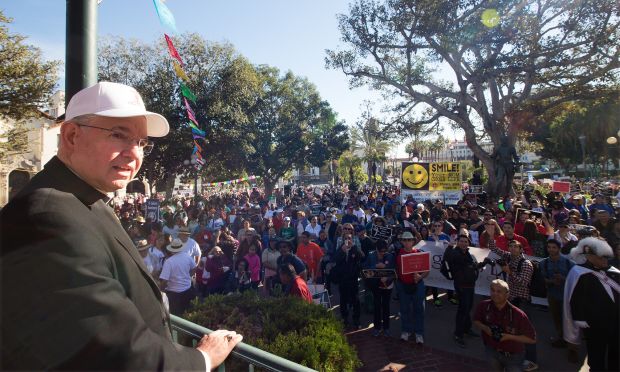 LOS ANGELES (CNS) — Los Angeles Archbishop Jose H. Gomez Jan. 17 led about 15,000 people from throughout Southern California in celebrating “the beauty of every human life” from conception to natural death at OneLife LA.

Organizers said it was the first such large-scale pro-life event to be held in downtown Los Angeles and they plan to make it an annual gathering.

“In the Christian vision, every human life is precious — created by God with transcendent dignity and endowed with rights that no one can deny or take away,” said Archbishop Gomez. “OneLife LA celebrates this vision and calls us to action — to love life, to care for life and to protect life at every stage and every condition, beginning with the most vulnerable in the womb.”

On the same day in Denver, about 1,500 people gathered for the March for Life Colorado, which went around the perimeter of downtown Denver’s Civic Center Park to the Colorado Capitol. Beforehand, Archbishop Samuel J. Aquila of Denver celebrated Mass at the Cathedral of the Immaculate Conception.

“Thank you for standing up for life and the dignity of the humanity,” Archbishop Aquila said in his remarks at the march. He urged pro-life supporters to be bold in pro-life stand and not be afraid to take that message door to door, because “fear is always the work of the emissaries of death … of the evil one.”

The Los Angeles event started at La Placita Olvera, the birthplace of the City of Angels, with remarks and a blessing from Archbishop Gomez and the auxiliary bishops of the archdiocese, as well as Auxiliary Bishop Dominic M. Luong of Orange; Bishop Gerald R. Barnes and Auxiliary Bishop Rutilio del Riego of San Bernardino; and Bishop Armando X. Ochoa of Fresno.

Following the blessing, attendees participated in a Walk for Life to Grand Park, for a family-friendly celebration featuring music, exhibits and food, along with a roster of local and national speakers and testimonies from a family who chose life over abortion, a victim of human trafficking, a former foster child, and a young girl championing life while facing a terminal illness.

Keynote speaker Ryan Bomberger shared his story of being adopted into a home with 13 children and talked about what inspires him to do the pro-life work he does as the chief creative officer of the Radiance Foundation, an organization he co-founded with his wife, Bethany.

Speaker Angela Guandon described surviving human trafficking and Brandi Moore shared how, through the support of mentors she met through Kidsave, she survived an attempted suicide after living in 25 foster homes, where she was placed following a broken relationship with an abusive mother.

Other speakers included Rick Smith, better known as “Noah’s Dad,” who began a blog to do “something really unique by telling the story of our son’s life. We believe that he has a story worth sharing; the story that all children (regardless of disability) are so worth loving. The story that Down syndrome is OK.”

Participants were encouraged to “Be Somebody to Somebody” in their own community championing life beginning at conception, and getting involved with good works through organizations that feed the homeless; find families for foster children; support pregnant women so they choose life; help to free victims of human trafficking; and walk with those facing the end of life.

In a statement released in the days leading up to OneLife LA, Archbishop Gomez said: “For me, granting permission to take innocent life challenges the very foundation of our society — because it goes to the heart of our idea of human rights.”

“America was founded on the great truth that all men and women are created equal and that God gives everyone basic rights that no one can deny or take away. Roe v. Wade turned this beautiful truth inside out,” he said.

By legalizing abortion virtually on demand, the U.S. Supreme Court “in effect decided that human rights are granted by government — not by God,” Archbishop Gomez said. “That gives the government the final say — not only in defining what is right and wrong, but also in deciding who gets to live and who does not.

He said that there are many injustices in society today, “but the most fundamental is the one our society rarely acknowledges — the routine taking of innocent human life every day through abortion.”

NEXT: Science about human life on side of pro-life movement, says speaker