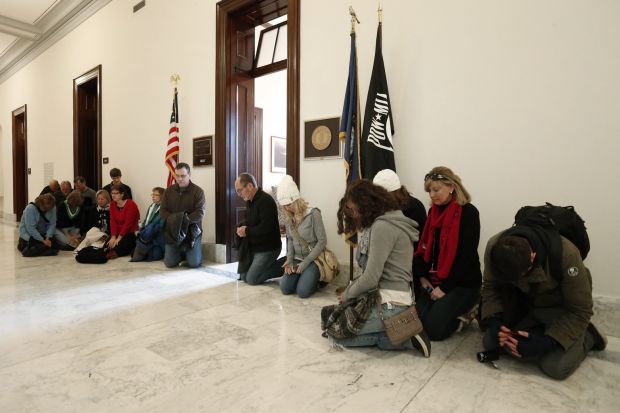 WASHINGTON (CNS) — After members of the U.S. House scuttled plans Jan. 22 to vote on a measure to prohibit abortion after 20 weeks, they passed a bill to restrict taxpayer funding of abortion.

Called the No Taxpayer Funding for Abortion Act, or H.R. 7, it applies the principles of the Hyde Amendment to federal health programs, including the Affordable Care Act.

Since 1976, the amendment has prohibited the use of taxpayer dollars to fund federal subsidies of any part of a benefits package that includes elective abortions.

H.R. 7 passed by a vote of 242 to 179. The action came as tens of thousands of people from around the country gathered on the National Mall for the annual March for Life marking the anniversary of the U.S. Supreme Court’s 1973 Roe V. Wade decision legalizing abortion virtually on demand.

Speaking in favor of the bill before the vote, U.S. Rep. Diane Black, R-Tennessee, called it “common sense, compassionate legislation” that will protect Americans’ “conscience rights by ensuring their hard-earned tax dollars are not used to fund the destruction of innocent life.”

“Today is a somber occasion,” she said, referring to the anniversary of the “court’s tragic decision” on abortion.

“Our hearts ache for the 56 million unborn lives lost to the shameful practice of abortion,” Black added.

Passage of the No Taxpayer Funding for Abortion Act, sponsored by U.S. Rep. Chris Smith, R-New Jersey, Black and others, brought an immediate threat of a veto from the Obama administration, which said in a statement the bill “would intrude on women’s reproductive freedom and access to health care” and “increase the financial burden on many Americans.”

Originally, pro-life members of the House planned to mark the Roe anniversary by voting on the Pain-Capable Unborn Child Protection Act, which would prohibit abortion after 20 weeks — when an unborn baby can feel pain — unless the life of the mother is in danger.

But The Washington Post and other media outlets reported that more than 20 House members raised concerns about the measure, also known as H.R. 36, and by late Jan. 21, GOP leaders determined they would fall short of the needed votes to pass it and postponed consideration of that measure.

A day before the House dropped consideration of the measure, U.S. Rep. Daniel Lipinski, D-Illinois, who is a Catholic, told Catholic News Service in an interview he thinks that with the new Republican majority in the House and Senate, “we are in a better position now than we have been in in a number of years” to pass a significant federal pro-life measure.

Lipinski, a co-sponsor of H.R. 36, was the only Democrat in the March for Life congressional delegation.

Asked if it is difficult to be pro-life in a party that does not share those views, he said: “It definitely is difficult; it would be much easier if I were surrounded by people who were supportive of life.

“I also think it is very important for the pro-life movement to have people in both parties; it would be very harmful to the movement if the Democratic Party were completely without anyone who is pro-life,” he continued.

As for those who argue that the pro-life movement is “anti-science,” he said, “I think that science shows us that life begins at conception. We know that, at conception, that all the DNA is there and the whole blueprint for a unique human life is there. So I think that those who claim otherwise are not looking at what the scientific evidence is.”

Lipinski said seeing so many young people get behind the pro-life movement is encouraging.

Results of a new poll show that nearly seven in 10 Americans — including millennials (ages 18-32) and women — are opposed to taxpayer funding of abortion. The findings were detailed in this year’s Knights of Columbus-Marist poll released in advance of the Roe anniversary.

Women oppose taxpayer funding of abortion 69 percent to 28 percent, while men oppose it at a rate of 69 percent to 30 percent. Among both men and women, fewer than one in 10 “strongly support” such funding.

Another Knights-Marist poll shows 84 percent of Americans want significant restrictions on abortion, and would limit it to, at most, the first three months of pregnancy. The poll, released Jan. 19, showed that percentage includes almost seven in 10 respondents, or 69 percent, who identified themselves as “pro-choice.”

For both polls, 2,079 adults were surveyed by phone between Jan. 7 and Jan. 13. The Marist Poll conducted the survey, which was sponsored by the Knights of Columbus. The margin of error for both is plus or minus 2.1 percentage points.

Contributing to this story was Nate Madden.

PREVIOUS: It’s up to young people to ‘end the scourge of abortion,’ says teenage speaker