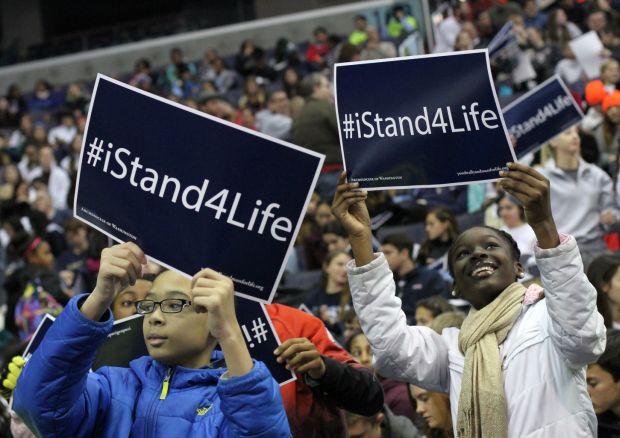 Students from St. Anthony School in Washington hold signs during a pro-life youth rally at the Verizon Center in Washington Jan. 22. (CNS photo/Gregory A. Shemitz)

WASHINGTON (CNS) — They had come from across the country, a crowd of about 10,000 strong, mostly teens and young adults, filling the DC Armory for a Youth Rally & Mass for Life sponsored by the Archdiocese of Washington for out-of-town participants attending the Jan. 22 March for Life.

The archdiocese also again sponsored another rally and Mass at the Verizon Center in downtown Washington mostly for local youth.

Moments before he offered the closing prayer at the DC Armory Mass, Cardinal Daniel N. DiNardo of Galveston-Houston, who was the main celebrant there, scanned the crowd from his vantage point near the altar set up at the stage, and said, “It’s really a beautiful sight, to look out and see so many young people saying ‘yes’ to life. How beautiful it is!”

A couple of hours earlier during the rally that preceded the Armory Mass, Cecilia Riepenhoff, a freshman from Lima Central Catholic High School in Ohio, sat in the top row in the farthest section from the altar with about 40 fellow classmates and members of St. Rose Parish in Lima who had ridden a bus for about eight hours to attend the March for Life.

She too, enjoyed the view from her vantage point, as sections of the arena were filled with young marchers wearing an array of bright matching colors, including blue, green, orange and red. 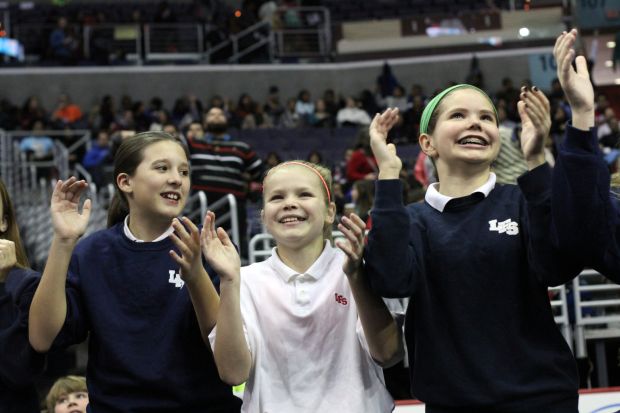 Students from the Little Flower School in Bethesda, Md., cheer during a pro-life youth rally at the Verizon Center in Washington Jan. 22. (CNS photo/Gregory A. Shemitz)

“It’s great to see there are so many people (who are pro-life). … It’s really cool, all these people are here for that,” she told the Catholic Standard, Washington’s archdiocesan newspaper. “They believe what I believe in.”

Alana Babineau, a junior from Holy Family Academy in Manchester, New Hampshire, was part of a two-bus caravan of pro-life marchers from that diocese who made the 10-hour drive to Washington for the rally, Mass and march.

They wore handmade, matching hats and scarves with a black and white checked pattern, and jokingly referred to themselves as “checker-heads.”

Babineau, sitting with her group in a front section near the altar, said it was moving to see so many thousands of people of all ages, coming together to pray and march on behalf of life. “They come to one place, and they are witnesses to life. It’s so amazing!” she said.

During the rally, sections of the boisterous crowd chanted, “I stand,” which was answered with, “For life,” by their peers. Musicians on stage encouraged the participants to wave blue signs reading hashtag #iStand4Life,” and then tweet that message in a social media campaign organized by the archdiocese.

“These people are so into standing up for the unborn, so into their faith, it’s a great group of people to be around. You feed off their energy,” said Tommy Francis, a 45-year-old foundry worker who accompanied a group of young marchers including his 15-year-old daughter from St. Remy Parish in Russia, Ohio.

Dylan Sherman, a senior from Lehman Catholic High School in Sidney, Ohio, also underscored the importance of young people standing up for life. “If anyone’s going to effect a change, it’s going to be us. … It’s our turn to take up the reins and fight the good fight,” he said. The 18-year-old said defending life is also a work of faith. “Saying that we’re Catholic means we stand up for what we believe in,” he said.

For many of the participants, standing for life was a cause close to their hearts.

Aniston Russ, a 16-year-old from John Paul II High School in Tallahassee, Florida, joined about 55 marchers on an overnight, 16-hour bus ride to the nation’s capital. Russ noted that day was her mother’s birthday, and she reflected how four years ago, her mom gave birth to a baby boy, Jude, who was born prematurely and died. Her mom, she added, was in the hospital for a week and nearly died, too. In 2013, she gave birth to another son, Conrad, who marked his first birthday last year.

Russ said her family’s experiences “made me really appreciate the gift of life, and it makes me want to stand up and defend the gift of life.” Russ said it was inspiring for her to look out at the crowd of young people at the armory. “It gives me hope for the future, knowing there are other people who care like I do,” she said.

That morning, the 105 marchers from the Diocese of Peoria, Ill., who had ridden through the night in two buses for about 14 hours, stepped onto the parking lot near the armory and put on matching orange vests, with the words “Life Guard” on the back. “We need to get our voices out and be heard,” said Ben Wilson, a senior from Peoria Notre Dame High School.

The rally featured moments of exuberant fun, such as when the Catholic rock duo Popple did a mash-up of Catholic hymns and pop songs, including, “Let there be peace on Earth,” followed by lines from “The Party Rock Anthem,” “Here I am Lord,” “Fireworks,” and “Super Bass.” Later, Dan Harms of that group asked the audience “to freak out for just a second,” and the youth complied by standing up, yelling and waving their signs.

In his homily at the Mass, Father Joseph Rogers, the pastor of St. John Neumann Parish in Gaithersburg, Maryland, said: “We are here to bear witness to the Gospel, to the good news that every life is precious in the eyes of God, and ought to be precious in our own.”

The priest pointed to the example of St. Maximilian Kolbe, who offered his life for another prisoner at the Auschwitz concentration camp in Poland during World War II. “The darkness did not keep him from loving. Love conquered culture of death and hatred. My brothers and sisters, this is why we have gathered (here today),” Father Rogers said.