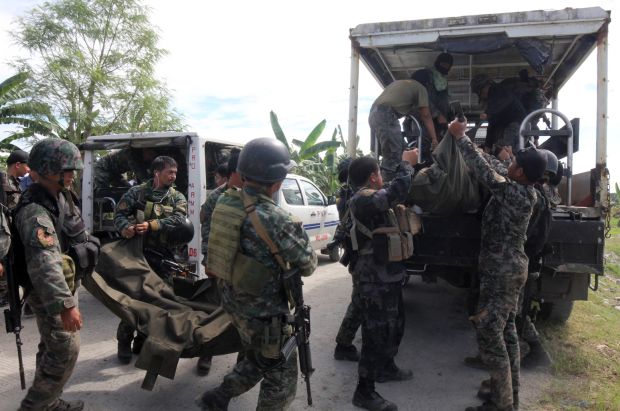 Members of elite Police Special Action Force carry bodies of their comrades Jan. 27 who were killed in southern Philippines after deadly clashes between the Moro Islamic Liberation Front and the government. (CNS photo/Althea Ballentes, EPA)

MANILA, Philippines (CNS) — Philippine Catholic leaders called for the peace process to move forward between the country’s largest Muslim rebel group and the government, days after a deadly encounter between fighters of the two sides in the country’s South.

The 12-hour battle Jan. 25 happened during a crucial stage in peace building efforts between the rebel Moro Islamic Liberation Front and the government.

Philippine officials said 44 commandos and about a dozen rebels were killed when a special police force pursuing two suspected terrorists clashed with some Front fighters in Mamasapano town in Maguindanao province. The government and the rebels are conducting concurrent investigations of the incident.

It happened on the eve of scheduled congressional hearings on a proposed law that would create an autonomous region in Muslim-majority Mindanao, and some lawmakers started to express doubt about its passage.

Archbishop Antonio Ledesma of Cagayan de Oro, one of the dioceses on Mindanao, called the deadly confrontation a “very unfortunate incident.”

He told Catholic News Service, “From the longer point of view we should continue to press for the peace process because this really marks the picture of more violence if no agreement is reached.”

On Jan. 27, Archbishop Socrates Villegas of Lingayen-Dagupan, president of the Catholic Bishops’ Conference of the Philippines, said in a statement, “While the CBCP vehemently condemns this act of violence against human life no matter what the avowed purpose of such violence may be, we cannot side with those who call for the discontinuance of peace talks.”

One Senate committee on the legalities of the proposed Bangsamoro Basic Law, which would create an autonomous region in Muslim Mindanao, proceeded with hearings, but Sen. Ferdinand Marcos Jr. suspended his Committee on Local Government hearings and called for an investigation into the incident. A House ad hoc committee on the proposed law suspended select hearings pertaining to certain aspects of the measure.

However, a number of lawmakers, including Marcos, then made public statements supporting the peace process. 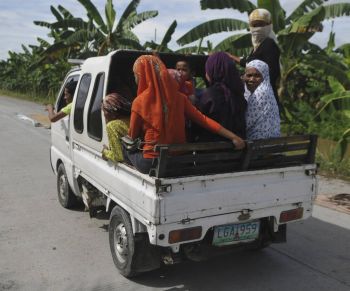 Residents ride on an open vehicle as they evacuate their homes in Mamasapano, Philippines, Jan. 27, after deadly clashes between the Moro Islamic Liberation Front and the government. (CNS photo/Froilan Gallardo, Reuters)

“The success of the entire peace process is contingent on this law,” said the president. “If this law is kept from being passed at the soonest possible time, the peace process will be derailed; the status quo will remain. If that happens, we cannot hope for anything but the same results: citizens who take to the mountains after losing hope; individuals kept from gaining justice who instead choose to exact violence on their fellowmen.”

Cotabato Cardinal Orlando Quevedo told a local online news site, Rappler, “The demand of wisdom is for us to hold back the natural response of revenge and desire to break off the peace process.”

Maguindanao province, where the rebels’ main camp is located, is part of the Cotabato Archdiocese, and Cardinal Quevedo has long been a strong advocate for peace between Muslims and Christians in his area.

Last March, the rebels and the government signed a peace accord to try to end 40 years of fighting, which has left more than 120,000 dead and millions displaced in the country’s South.

On Jan. 29, national police troops carried 42 Philippine flag-draped caskets bearing their fallen comrades on the tarmac of a Manila air base after the bodies were flown home for burial. Two of the dead had already been buried by their families.

In a text message to reporters Jan. 29, Manila Cardinal Luis Antonio Tagle said, “The Archdiocese of Manila joins the nation in mourning her fallen soldiers.”

He said Masses for the dead would be offered Jan. 30 in all archdiocesan churches, shrines and chapels of religious communities “for the repose of our heroes.”

PREVIOUS: Pope: Salvation is not for VIPs, it’s offered to all God’s people