Pope: Salvation is not for VIPs, it’s offered to all God’s people 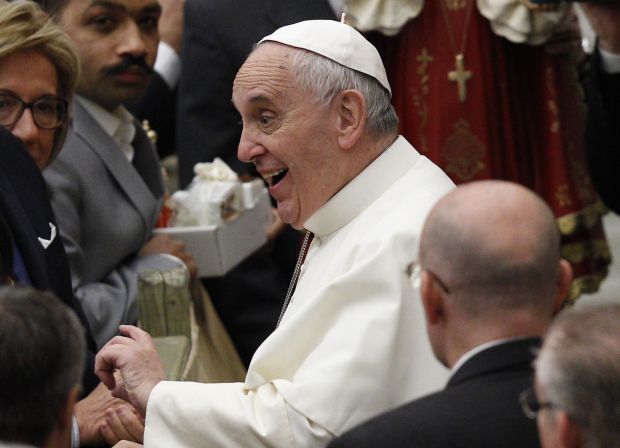 Pope Francis greets people during his general audience in Paul VI hall at the Vatican in this Jan. 28 file photo. (CNS photo/Paul Haring)

VATICAN CITY (CNS) — Christ showed that the way to draw close to God is not by putting down other people and creating an exclusive club, but by embracing and encouraging others to love and do good works, Pope Francis said.

Christians can end up “privatizing” the faith when they believe “salvation is for me and my little group, not for the entire people of God,” the pope said Jan. 29 during the homily at his early morning Mass in the chapel of the Domus Sanctae Marthae where he lives.

“This is a very big mistake; it is what we call and see as ‘ecclesial elites.’ When these little groups are created among the people of God,” he said, “they think they are good Christians, and perhaps they have good intentions, but they are little groups that have privatized salvation.”

The pope’s homily focused on a reading for the day’s Mass from Hebrews 10:19-25, talking about Christ’s one sacrifice for all and about persevering in faith. The reading explains how Jesus’ sacrifice opened “a new and living way” that allows Christians to enter God’s presence.

Each person’s personal encounter with Christ — the experience that “the Lord looked at me, gave his life for me, opened this door, this new way for me” — might lead some people to forget that Jesus also saved each person as “a people, as a church,” the pope said.

“The Lord saves us as a people,” he said, which is what the reading underlines when it talks about the need “to rouse one another to love and good works” and not “stay away from our assembly, as is the custom of some, but to encourage one another.”

Encouraging each other in holiness recognizes that “salvation isn’t just for me. If I understand salvation in this way, I am wrong; I’m on the wrong path. The privatization of salvation is the wrong way,” he said.

Sometimes “when we are in a meeting — at the parish, with a group — we judge others,” he said, and “there is a kind of contempt for the others. And this is not the door, the new and living way that the Lord opened.”

By “scorning others, deserting the whole community, deserting the people of God,” these Christians “have privatized salvation” thinking it is exclusive to their inner circle of “elites,” he said. But “God saves us as a people, not as elites that we, with our philosophies or our way of understanding the faith, have created.”

Instead, the three elements of Jesus’ “new and living” way are: having “faith in Jesus who purifies us,” having unwavering hope in his promise and looking outward to encourage one another to be loving and charitable, he said.

“If you don’t speak in a community, if you do not give encouragement to one another in these three virtues, the members of that community have privatized the faith” and are only looking out for themselves and “not the salvation of everyone, the salvation of the people,” he said.

NEXT: After gunbattle, Philippine prelates say peace process must continue