All in a cardinal’s day: papal trip prep and presence with the poor 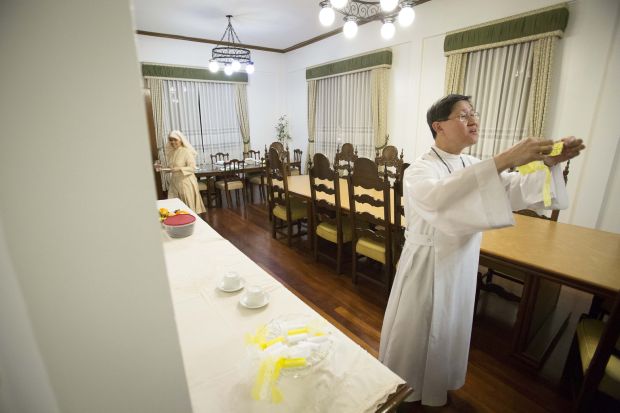 After eating a piece of candy Jan. 10, Cardinal Luis Antonio Tagle of Manila, Philippines, looks at the elaborately cut tissue paper that is used to wrap the local sweet at his residence in Manila. The 57-year-old cardinal is preparing for Pope Francis' Jan. 15-19 visit to the Philippines. (CNS photo/Tyler Orsburn)

MANILA, Philippines (CNS) — “Today I was thinking about the tenacity of the poor,” said Cardinal Luis Antonio Tagle of Manila as he and his guests rode past a polluted creek lined with the cardboard, plastic and tin shacks of people he describes as “informal settlers.”

He had just presided over the groundbreaking ceremony for a building that will house 67 of the families living along the creek, then celebrated a late-afternoon Mass for them and for the roughly 300 families already living in their own tiny apartments in neat, two-story cinderblock units built under the auspices of the St. Hannibal Empowerment Center.

As he arrived in a pedal cart to the building site — a lot vacant except for a huge pile of rubble — and as he left the Mass, the crowds pressed in. Police and community organizers had to form a cordon to get him to his car after Mass, but he still stopped to pose for selfies, smiling broadly and bringing the hands of the elderly to his forehead in a sign of respect.

The poor, he said, “are willing to wait. When life is easy, it’s easy to say I’m a hopeful person,” but the poor in the Malibay community of Pasay City on the outskirts of Manila had been living in shacks for decades. And they spent three years working with the Rogationist Fathers on community education and community-building projects before they found, financed and purchased the plot of land that will be their new home.

Pope Francis was scheduled to arrive in Manila Jan.15, and the 57-year-old cardinal had a million details to handle — many of them dispatched with his lightning quick telephone text-messaging skills — but he immersed himself in the crowd at the ground-breaking ceremony and Mass Jan. 11.

It was just a couple hours in a day filled with appointments from 9 a.m. to 10 p.m. He didn’t even stop for lunch, although after the Mass in Pasay City and before heading to the next Mass, he did take a little piece of cake that was part of the sweet array offered to his guests by the sisters who staff his residence. He also popped a couple “pastillas de leche” into his mouth, trying to tempt his already sugar-buzzing guests.

When a comment was made that he seems much thinner than he did in October when he was one of the presidents of the extraordinary Synod of Bishops on the family, he said, “It’s no joke preparing for the Holy Father.”

Asked if his schedule would be any lighter the next day, he replied with a long, drawn out “nooo.” But despite all the meetings, he still had to find a way to spend a bit of time with his father, Manuel, because it was his dad’s 85th birthday. Although he knew it wasn’t quite right, he said he might have to ask his brother to bring his parents to Manila from their home in Imus, about 15 miles away.

His parents have not been unaffected by the planning for the papal trip. Cardinal Tagle said he has been hearing from all sorts of “long-lost friends” who were hoping to meet Pope Francis. “Some even go to my mother,” Milagros, asking for tickets to one of the papal events, he said.

The cardinal’s public Sunday began with him warmly welcoming a succession of journalists to his home, standing where TV crews told him to and answering their questions with ease. He posed for group and individual photos with almost all of them.

He talked about the papal trip, the morning earthquake that woke all his visitors, the Filipino people, Pope Francis’ personality, popular piety and the poor. He expressed concern about how he will deliver the gifts people have given him to give to the pope. They fill 14 boxes so far, he said, and the nuncio doesn’t want them stacked at the nunciature where the pope will sleep.

During a fast-paced and often funny conversation with Lino Rulli, host of the “The Catholic Guy” on SiriusXM, Cardinal Tagle said he is not nervous about the approaching papal visit. “I’m excited. I want to see how the pastor in him will react to the reality here.”

The pope, he said, practices what he preaches about going out to the world’s peripheries to meet, listen to and help the poor and excluded.

When you do that, the cardinal said, “you will learn something,” and he’s looking forward to seeing the pope’s face, watching his eyes, when he “receives the Gospel proclaimed to him by the poor.”

The theme came up again in an evening conversation with Catholic News Service before the last events of the day: a 7 p.m. Mass in a super-packed Santo Nino de Tondo Church and dinner afterward with the concelebrating priests, auxiliary bishop and the journalists who were treated as his honored guests.

The Filipino poor usually are “resigned, in a positive sense. They say, ‘We will try to succeed, but if not, God will take care of us,'” he said. Even if they cannot provide their children with a nice house, good schools and nutritious meals every day, they try to live honorably and ensure special events are celebrated. “If nothing else, they want to leave their children a good name and good memories. You hear that over and over from the poor.”

Cardinal Tagle said he did not know how to judge the accuracy of the predictions that 5 million people will attend the pope’s Mass Jan. 18 in Manila’s Rizal Park, but he knows a lot of the poorest Filipinos will be there.

“Many people believe that even if they cannot see the pope up close, if they are geographically present, it will bring a blessing. And their children and grandchildren can say they were there,” he said. Sacrificing to get to the park, waiting for hours and putting up with the crowds “is a bodily form of prayer, like fasting.”

Cardinal Tagle said that over and over again, his understanding of the Scriptures has taken on new depth from his experience with the poor and “their wisdom, their hope.” That’s what he wants to share with the pope.

NEXT: Freedom of press limited by respect for religion, pope says