Waiting for the pope, Philippine family reflects on dreams, blessings 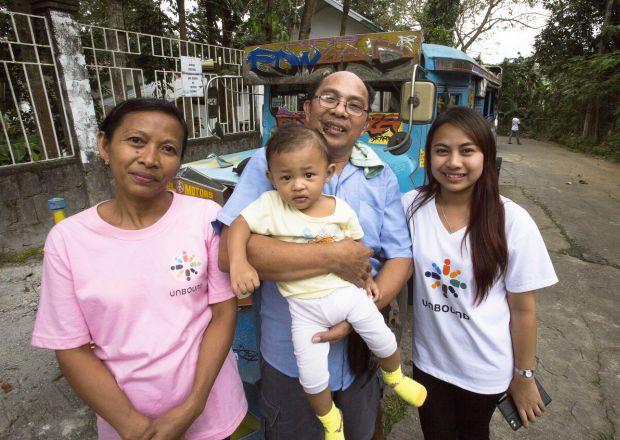 Maricel Ranola, right, poses for a photo with her parents, Olimpia and Domingueto, and her niece in Antipolo, Philippines, Jan. 14. Maricel Ranola will attend Pope Francis Jan. 18 meeting in Manila with youths. (CNS photo/Tyler Orsburn)

ANTIPOLO, Philippines (CNS) — Domingueto and Olimpia Ranola are proud of their daughter, Maricel, the only one of their nine children to go to college and one of the few young people from San Isidoro Labrador Parish chosen to attend Pope Francis’ Jan. 18 meeting with youths in Manila.

In an interview in their neat little rented home in the San Luis neighborhood of Antipolo, on the slopes of the Sierra Madre east of Manila, they both beamed when speaking about their children and when playing with their 1-year-old granddaughter.

But tears came to their eyes Jan. 14 as they discussed the circumstances that made them so grateful to Unbound, a U.S.-based, Catholic-inspired organization that recruits sponsors in the United States to help young people and the elderly in developing countries, including the Philippines.

Olimpia Ranola could not hold back tears as she talked about the accident that plunged them into the depths of poverty; “a man died,” she said, and her husband, a jeepney driver, was forced to pay damages to the man’s family. The Ranolas were evicted from their home since they could not pay rent. “My children were forced to work so we could survive.”

“Every day I would cry,” she said, speaking through an interpreter. “We depended only on the Lord. The Lord cares for us.”

Her husband, a man of few words, fidgeted during the interview, nervously wiping his face with a towel in the hot, damp weather, and using a stick to prod the dog that wandered in uninvited.

“I want a good life for my children and that they would finish school,” he said. He only attended school through the fourth grade and knows that education is key to “good jobs and a good future.”

The family is doing better now. Three days a week, Domingueto Ranola drives a jeepney from 4 a.m. to 10 p.m., earning the equivalent of a little more than $11 a day. Another two days a week, he works at the jeepney depot collecting fares; that brings in another $8 a day.

Although Maricel Ranola is just a few months away from graduation after studying secondary education at the Antipolo campus of LaSalle College, her father said he is still surprised she was able to get into the university.

“It’s a blessing,” Olimpia Ranola added, and it’s just one of many that came from Unbound sponsoring her daughter, paying her school fees and helping with supplies, the school uniforms and sometimes food.

Maricel Ranola, 21, will graduate in March and hopes to begin teaching high school English by June. Then she’ll start setting aside money so that she can buy her family a home; they have received an eviction notice from the place where they live now.

She is petite and knows she does not look 21.

“Even if I’m small, I can still manage children,” she said. “As long as I’m clear, as long as they can understand me, I’m not afraid to teach.” 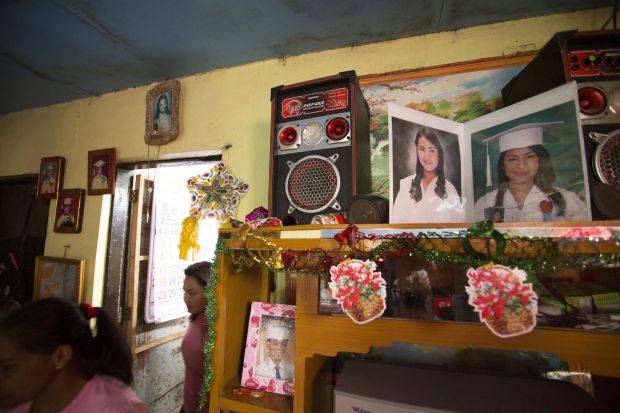 She said she is grateful to Unbound for its support of her studies and for the weekly group meetings that include tutorials, sports, music and dance. She now helps the younger children in Unbound with their English homework.

She also said she was excited about seeing the pope.

“I want to hear him giving me advice as a youth; basically to know what is his message for me about mercy and compassion,” the theme of his visit to the Philippines.

“I want to reflect, I want to hear the message of the pope to the youth,” she said. “As everybody knows, the pope loves the poor and, being poor, he inspires me.”

The pope, she said, is “Christ’s tool to send his message to everyone — to me — about mercy and compassion, and about how to stay humble and how to stay strong despite difficulties in life.”

Maricel Ranola said she already has learned a key lesson about mercy and compassion: “I’ve learned from my parents that no matter how poor you are, you can always share what you have.” No one is so poor “that he cannot share his blessings.”

Now that she is about to graduate, she said she has “a very big responsibility” because it will be her turn to support her three younger brothers, ages 15, 13 and 12. When school gets difficult, she said, she thinks of her family. “They are my inspiration that keeps me going and keeps my dream alive.”

The parents of sponsored children must get involved in the Unbound community groups, one for mothers and one for fathers. They meet each week to pray, to share their goals and the steps they are taking to achieve them and to band together in community-service projects and lobbying to improve their neighborhood.

“Before, I just stayed at home,” said Olimpia Ranola, who chairs The Tulips, the San Luis mother’s group. “Now I know the other mothers, and we share our blessings.”

NEXT: All in a cardinal’s day: papal trip prep and presence with the poor