Archbishop says church in Niger will rebuild after riots 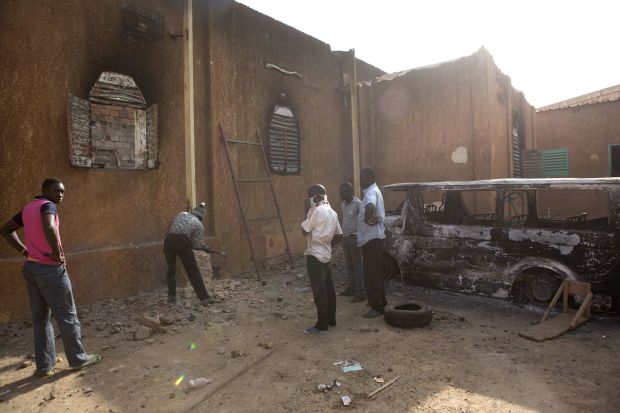 OXFORD, England (CNS) — An archbishop in Niger said the church would rebuild after rioters destroyed its places of worship during protests over cartoons mocking depictions of Muhammad by the French satirical newsweekly Charlie Hebdo.

“We’re still trying to understand the savagery which erupted here — but it’s certain it was well thought-out, prepared and organized,” said Archbishop Michel Cartateguy of Niamey, Niger. He also cited bravery of local Muslims who sheltered Christians from the violence and imams who spoke against it.

“We now have to reconstruct hearts and minds deeply scarred by these events and renew the friendly ties we always had with the Muslim community,” he told Catholic News Service.

Archbishop Cartateguy said he believed publication of the cartoons in Paris had only served as a pretext for the riots, in which Catholic schools, orphanages and shops were burned in Niamey, Maradi and Zinder. He said members of Boko Haram, a Muslim militant group operating from neighboring Nigeria, had “certainly helped direct” the anti-Christian violence, which involved children as young as 10.

At least 10 people were killed, more than 200 injured and 45 Catholic and Protestant churches set ablaze during the Jan. 16-17 riots. Local media said police had fought for four hours to save Niamey’s Our Lady of Perpetual Help Cathedral, but reported that six of the city’s eight Catholic parishes had been wrecked.

Some churches celebrated their first post-violence Masses the weekend of Jan. 24-25. The archbishop said church leaders hoped to reopen Catholic offices and schools in the capital by late January, adding that he had also met and prayed with local Muslim imams, who had all condemned the violence.

“They told me the prophet Muhammad protected Christians in his day and pledged to follow his example by helping Christians in danger now,” Archbishop Cartateguy said.

“We know some local Muslims, young included, showed courage and solidarity by sheltering Christians in their family homes. Some also stood in our church doorways saying the rioters would have to kill them as well.”

Niger’s 25,000 Catholics make up a small fraction of its mostly Muslim population of 18 million; Catholics include immigrants from other West African countries, including Benin, Togo and Ivory Coast.

In a Jan. 17 message to the nation, President Mahamadou Issoufou of Niger declared three days of mourning for victims of the violence and said the rioters had “understood nothing about Islam.” He, too, paid tribute to Muslims who helped shelter Christians and protect their places of worship.

Archbishop Cartateguy told CNS his diocese was sheltering around 100 lay Christians and clergy from Zinder, where there was “still great fear.”

NEXT: Persecuted for faith, Christians are united in bloodshed, pope says