Persecuted for faith, Christians are united in bloodshed, pope says 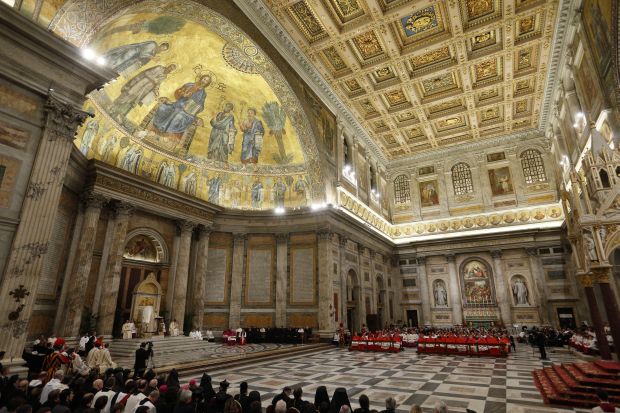 Pope Francis leads ecumenical vespers at the Basilica of St. Paul Outside the Walls in Rome Jan. 25. The service marked the closing of the Week of Prayer for Christian unity as well as the feast of the Conversion of St. Paul. (CNS photo/Paul Haring) 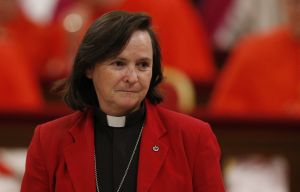 VATICAN CITY (CNS) — Christians are united in bloodshed as they suffer from violence and persecution in various parts of the world, Pope Francis told Christian leaders.

Today’s martyrs are men and women, who through their witness to Jesus, are “persecuted and killed because they are Christian,” the pope said Jan. 25 during an ecumenical prayer service marking the end of the Week of Prayer for Christian Unity.

Those who persecute them make no distinction about “which denomination they belong to. They are Christians and for that (they are) persecuted. This, brothers and sisters, is the ecumenism of blood.”

With Orthodox, Eastern Orthodox, Anglican, Lutheran, Methodist and other Christian representatives present and reading some of the prayers, Pope Francis presided over the service at the Basilica of St. Paul Outside the Walls.

The service began with Pope Francis, Orthodox Metropolitan Gennadios of Italy and Anglican Archbishop David Moxon, the archbishop of Canterbury’s representative in Rome, bowing in prayer before the tomb of St. Paul on the feast of his conversion.

Closing the Jan. 18-25 Week of Prayer for Christian Unity, the pope said Jesus showed that encountering those who are different “from us can make us grow.”

Basing his homily on the Gospel story of Jesus’ encounter with the Samaritan woman at the well, the pope said the encounter is marked by dialogue, patience and respect, showing people today that “in order to understand each other and grow in love and truth we have to stop, welcome and listen to each other.”

Unity comes about by journeying together, the pope said; nothing comes from standing still.

In fact, “Christian unity will never be the fruit of refined theoretical discussions in which each one will try to convince the other of the validity of one’s opinions,” he said before asking: “Will the Son of Man come and find us still having talks?”

Christians must recognize that “we need each other, to come together and face each other under the guidance of the Holy Spirit who harmonizes diversity and overcomes conflicts,” he said.

Because of the Holy Spirit, “we have become one with Christ” and loving children of God, he said.

“This mystery of love is the most profound reason of the unity that binds all Christians and is much greater than the divisions that occurred throughout the course of history,” he said. That is why the closer each Christian draws to Christ in humility, the closer “we will draw to each another, too.”

So many people in the world are tired and thirsting for truth and meaning, the pope said. All churches and Christian communities, being called to evangelize, can do so more effectively by not being self-enclosed, exclusive or bent on “imposing uniformity according to purely human calculations.”

“The common commitment to proclaim the Gospel permits overcoming every form of proselytism and temptation to compete. We are all at the service of the one and same Gospel,” he said.

Among those attending the prayer service were men and women belonging to Catholic, Orthodox, Anglican and Protestant religious orders; they had taken part in a three-day meeting on their role in ecumenism.

The pope, who met with them at the Vatican Jan. 24, said consecrated men and women were particularly suited for promoting unity because religious life is about seeking union with God and fostering greater unity within the community.

Religious life also shows that “unity is not born of our efforts, but is a gift of the Holy Spirit who achieves unity in diversity.”

Unity is achieved by “walking together,” he said, along a path of “fraternity in love, service and mutual welcoming.”

The more individuals strive to live holy lives in conformity to the Gospel, the closer people will be in union with God and “the more deeply and easily will they be able to grow in mutual brotherly love,” he said.

PREVIOUS: Archbishop says church in Niger will rebuild after riots

NEXT: U.S. bishops’ group travels to Iraq, meets with those who fled ISIS