Bishops see signs of resilience in Gaza, despite destruction 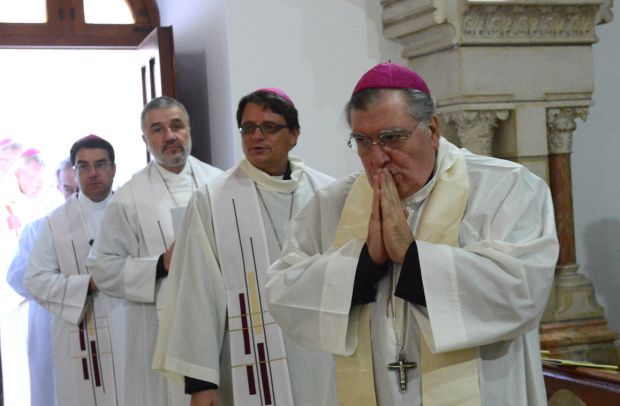 BETHLEHEM, West Bank (CNS) — Despite the immense destruction still evident in Gaza following the war there last summer, the resilience of the people gave hope to 16 bishops of the Holy Land Coordination during their visit to the Gaza Strip Jan. 11-12.

One boy’s words continued to resonate with Bishop Oscar Cantu of Las Cruces, New Mexico. The boy, who was the last student to speak to the bishops before they left Holy Family School in Gaza, told them he simply wanted dignity.

“What made a deep impression on me is that the people are not broken,” said Archbishop Stephen Brislin of Cape Town, South Africa. “Their will is very strong. We saw this in the way they interacted with us and the fact that life is as back to as ‘normal’ as possible. It signifies the strength of the human spirit.”

It took some of the bishops six hours to get through the Erez checkpoint into Gaza where they celebrated Mass, met with members of the Christian community and were briefed on the work of CRS, Caritas and the Pontifical Mission in Gaza.

The bishops also visited the Israeli border town of Sderot, which was among the Israeli towns that came under bombardment from Gaza during the war, before returning to Bethlehem.

“We shouldn’t make light of the Israeli perspective and we need to listen to it; it is truly a concern and before the walls of separation there were suicide bombings. We understand the fear, but that is not a long-term solution,” said Bishop Cantu. “The wall of separation is causing even more problems, even in the short term.”

Auxiliary Bishop William Kenney of Birmingham, England, noted that an Israeli they spoke with in Sderot remembered with fondness the time when Gazan workers were able to come to the city, and they had meals together.

Israel and Egypt instituted a border blockade of Gaza in 2007 following an internal struggle between two Palestinian factions — Hamas — which Israel, the United States and others consider a terrorist organization — and Fatah, when Hamas took control of the Gaza Strip following their legislative election win in 2006.

As a result of the blockade, the bishops noted, Gaza residents are still struggling to repair or rebuild their homes when it is extremely difficult to obtain much-needed building supplies.

Tens of thousands of people are still living in their bombed out homes or under primitive conditions even during the recent cold spells, the bishops noted, calling Gaza an “open-air prison.” They emphasized the importance of showing solidarity for the people living in Gaza so they know they are not forgotten.

“The biggest need for the people of Gaza is freedom,” said Bishop Felix Gmur of Basel, Switzerland. “They do not feel free because there is no exchange of goods or (movement) of people.”

He noted the strength of the shrinking Gazan Christian community.

“They hold on. They keep being there,” Bishop Gmur said. “It makes me feel sad because they are not free; they are living in circumstances which are partially hostile because … there are some (Muslims) who would like them to be outside of Gaza.”

In the face of growing radicalization of Islam in the region as well as in Europe, it is up to religious leaders of all faiths — especially Christians — to uphold the banner of reconciliation, several bishops said.

Since 1998, the Bishops’ Conference of England and Wales has organized the annual meeting of the Coordination of Episcopal Conferences in Support of the Church of the Holy Land at the invitation of the Assembly of Catholic Ordinaries of the Holy Land.

Mandated by the Holy See, the Holy Land Coordination meets every January in the Holy Land, focusing on prayer, pilgrimage and persuasion with the aim of acting in solidarity with the Christian community there and sharing in the pastoral life of the local church as it experiences intense political and social-economic pressure.

PREVIOUS: Pope to Sri Lankans: Look at your past, pursue justice together

NEXT: Markets cannot be the answer to economic inequities, pope says in book