Pope to Sri Lankans: Look at your past, pursue justice together 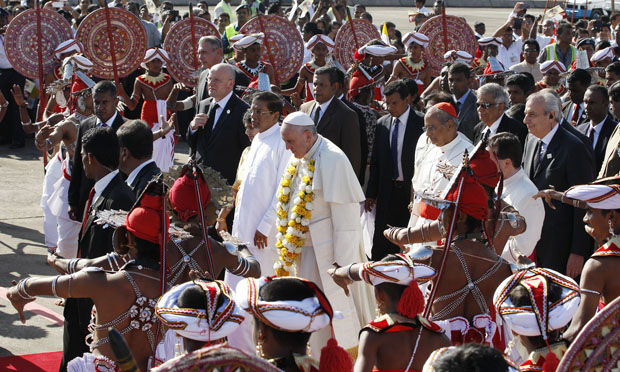 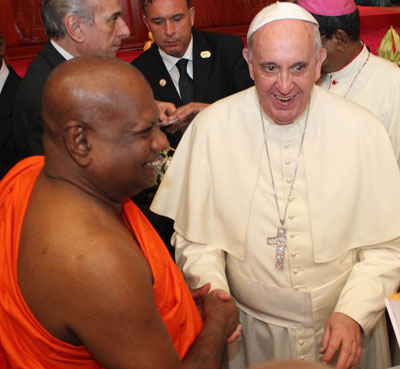 Pope Francis is greeted by a senior Buddhist monk during a meeting with religious leaders at the Bandaranaike Memorial International Conference Hall in Colombo, Sri Lanka, Jan. 13. (CNS photo/Anto Akkara)

“The process of healing also needs to include the pursuit of truth, not for the sake of opening old wounds, but rather as a necessary means of promoting justice, healing and unity,” the pope said Jan. 13 at an arrival ceremony at Colombo’s international airport.

Pope Francis addressed his words to Sri Lanka’s new president, Maithripala Sirisena, who was elected Jan. 8 and sworn in the next day. During his campaign, Sirisena promised an independent investigation into war crimes allegedly committed during the 26-year struggle between government forces and rebels belonging to the country’s Tamil minority.

In his remarks to the pope, Sirisena noted that during the last papal visit, by St. John Paul II in 1995, “Sri Lanka was embroiled in annihilating terrorism, following the mayhem caused by the terrorists in the daily lives of the people” — a reference to the Tamil Tigers, finally defeated in 2009 by the military under Sirisena’s predecessor, President Mahinda Rajapaksa.

The war divided Sri Lanka along religious as well as ethnic lines, since members of the Sinhalese majority are typically Buddhist, and Tamils for the most part Hindu. Catholics, who make up 7 percent of the country’s population, include members of both ethnic groups. Rajapaksa, who sought re-election Jan. 8, had his political base in the country’s Sinhalese-Buddhist majority. Sirisena enjoys more support among minorities.

“Sri Lanka for many years knew the horrors of civil strife and is now seeking to consolidate peace and to heal the scars of those years,” Pope Francis said, his voice hoarse and weary-sounding after the 10-hour flight from Rome. “I am convinced that the followers of the various religious traditions have an essential role to play in the delicate process of reconciliation and rebuilding which is taking place in this country.”

That afternoon, the pope met with local Buddhist, Hindu, Muslim and other Christian leaders, telling them that efforts at “interreligious and ecumenical relations take on a particular significance and urgency in Sri Lanka,” as sources of “healing and unity” after years of “civil strife and violence.”

Again, he sounded a note of realism, stressing that dialogue could not eliminate cultural differences but would emphasize the need for their acceptance. 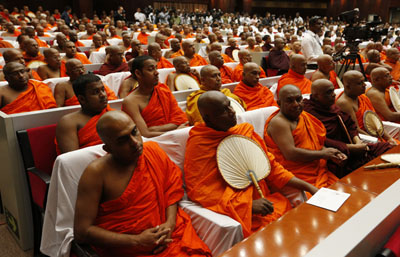 “For such dialogue and encounter to be effective, it must be grounded in a full and forthright presentation of our respective convictions. Certainly, such dialogue will accentuate how varied our beliefs, traditions and practices are. But if we are honest in presenting our convictions, we will be able to see more clearly what we hold in common,” the pope said. “Men and women do not have to forsake their identity, whether ethnic or religious, in order to live in harmony.”

The pope urged followers of different religions to cooperate in social service, providing for the “material and spiritual needs of the poor, the destitute” and thus “rebuild the moral foundations of society as a whole.”

At the interreligious meeting, held at a Colombo conference centers, a Hindu leader, speaking the Tamil language, voiced hopes for lasting peace and draped a saffron silk shawl over Pope Francis’ shoulders.

A representative of the local Muslim community condemned “terrorism, racism, extremism,” including recent killings by Islamist militants at a Paris newspaper and a military-run school in Pakistan.

A Buddhist monk, representing the faith of 70 percent of Sri Lanka’s population, noted the common dedication of great religions to the values of love, self-sacrifice and peace, as well as the common susceptibility of humanity to hatred and violence.

Pope Francis’ first day in Sri Lanka started when his plane from Rome landed at 9 a.m. He was greeted by traditional dancers and drummers, a 21-gun salute and a choir of teenagers who sang a song of welcome in English, the same language the pope and Sirisena used for their remarks. Girls in white dresses and boys in neckties and shorts waved gold-and-white Vatican flags. Nearby stood 40 elephants draped in colorful fabrics, a traditional gesture of honor for distinguished guests.

The pope’s entourage, led by Cardinal Pietro Parolin, Vatican secretary of state, wore white cassocks, keeping with the ecclesiastical custom in tropical climates. Temperatures were in the 80s in the bright sunshine. 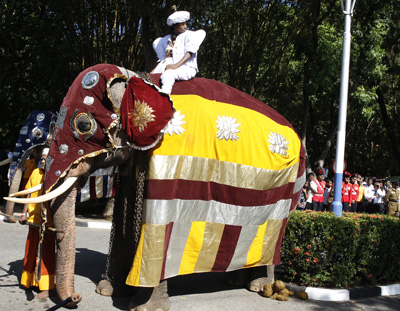 Elephants from a Buddhist temple, a traditional sign of esteem for a dignitary, are present as Pope Francis arrives at the international airport in Colombo, Sri Lanka, Jan. 13. (CNS photo/Paul Haring)

The pope rode the 17-mile distance to the nuncio’s residence in an open-sided popemobile past crowds waving Vatican flags. A persistent breeze made it impossible for him to keep his zucchetto on for much of the ride. Because the pope made frequent stops to greet and bless individuals along the way, his ride took twice as long as expected, leading him to cancel a meeting with Sri Lanka’s bishops planned for early afternoon.

The day marked the start of Pope Francis’ second trip to Asia, following a visit to South Korea in August. He was scheduled to spend two full days in Sri Lanka, before flying to the Philippines Jan. 15. The highlights of the Sri Lanka leg were expected to be the Jan. 14 canonization of Blessed Joseph Vaz as the country’s first saint and, later the same day, a pilgrimage to the shrine of Our Lady of Madhu, which served as a sanctuary for refugees during the civil war. 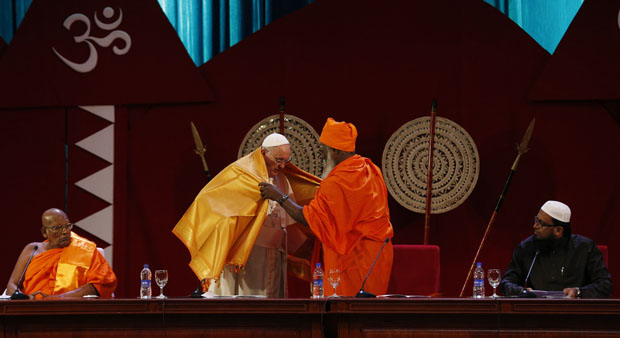 NEXT: Bishops see signs of resilience in Gaza, despite destruction