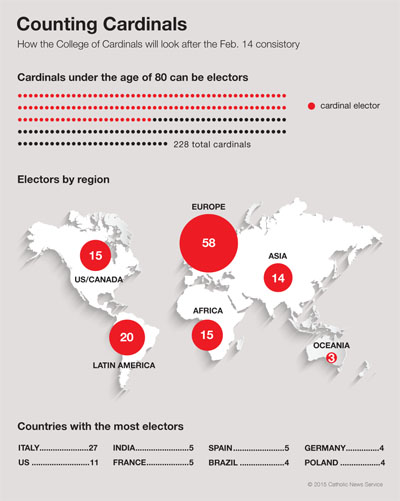 VATICAN CITY (CNS) — A pope’s impact on the College of Cardinals is naturally discussed after his death when his nominees and those of his predecessors enter the Sistine Chapel to elect a new pope.

Voting in a conclave is the heaviest and most visible responsibility that comes with a red hat, but those under the age of 80 — the cardinal’s retirement age — also influence the work of the offices of the Roman Curia and serve as special papal advisers.

Along with a red biretta and the assignment of a “titular” church in Rome, new cardinals are appointed members of Vatican congregations, councils, commissions and secretariats; they are not simply advisers to those offices, but full members whose vote is needed for the most important decisions and documents issued by each office.

The statistical impact of Pope Francis’ choices for new members of the College of Cardinals will be small, but significant.

After the new cardinals are created Feb. 14, the college will have 125 members under the age of 80 and, therefore, eligible to vote in a future conclave. The total number of cardinals will rise to 228 — a record-breaking number. If a papal election were held the next day, more than 45 percent of the world’s cardinals — all those over the age of 80 — would be locked out of the Sistine Chapel where the conclaves are held.

Much of the reaction to Pope Francis’ announcement Jan. 4 of the identities of the new cardinals focused on how they give representation in the college to Catholics in some of the most remote parts of the world — the “peripheries” the pope is always talking about. With the addition of electors from Ethiopia, New Zealand, Vietnam, Myanmar, Thailand, Uruguay, Panama, Cape Verde and Tonga, the number of countries with electors will rise from 48 to 57.

Among the electors, the percentage of Europeans will drop to 46.4 percent from its current 48 percent. While not a huge change, it is a sign of continuing progress in making the college more representative of the church as a whole; in 1960, there were 79 members of the college and they came from only 27 countries. About 70 percent of the college at the time was made up of Europeans.

Borrowing a category from the world of politics and economics — the Group of Eight countries with the most advanced economies — even after the consistory the world’s most powerful nations still will have a majority among cardinal electors. But instead of representing 61 percent of the electors, the G-8 countries’ share will drop to 57.5 percent.

Bringing new members into the college rejuvenates the body, although in the past several decades the average age of cardinal electors has decreased only slightly with each new intake. Two of Pope Francis’ picks — Cardinals-designate Soane Mafi of Tonga and Daniel Sturla Berhouet of Montevideo, Uruguay — are still in their 50s. However, after the consistory, the average age of the whole block of cardinal electors will decline only by five months, dropping to 71 years, one month.

As far as the age of the new cardinals goes, Pope Francis is well within the norm for the past several decades when the average age of incoming electors has been between 65 and 68.

The last time the average age of a batch of new cardinals was less than 60 years old was the 1977 consistory in which Pope Paul VI created four new cardinals, including then-Archbishop Joseph Ratzinger. The average age of that group was 57.2 years, according to catholic-hierarchy.org, the leading website for statistical information and brief biographical data of all the world’s bishops and cardinals.