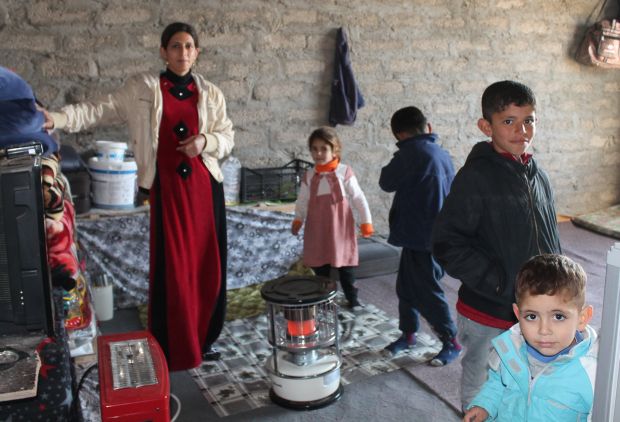 An Iraqi Yezidi family stands in the unfinished building in Shariah Collective outside of Dohuk, Iraq, Jan. 17. The family will receive insulated doors and windows through a Catholic Relief Services project. (CNS photo/Dale Gaviak)

Thousands of Iraq’s religious minorities were displaced by Islamic State militants during the summer. Left homeless and penniless, they now struggle in blustery snow and rain in the country’s northern Kurdish region, where the majority shelter.

“We’re so grateful for this help from CRS and Caritas,” said a slender Yezidi man named Salim, 34.

Although Salim’s family of 8, including his elderly mother, have received food parcels, until this distribution they lacked the means to stay warm in temperatures that often drop to freezing at night.

In August, Islamic State militants swooped down on the town of Sinjar, forcing thousands of people, mainly Yezidis, to escape up Mt. Sinjar with almost no food or water.

Salim said told Catholic News Service that, when the militants came, many young women were taken as slaves, while Yezidi men were forced to convert to Islam or be killed. His family managed to buy back a couple of their relatives for $800 piece, but several uncles have not been heard from since.

Dohuk and its surrounding mountainous region, including the nearby Shariah Collective, host about 450,000 displaced Christians, Yezidis, Shiites, Shabaks and Kaka’i people, according to Hani El-Mahdi, CRS Iraq country representative.

The United Nations says there are 800,000 displaced Iraqis in the entire Kurdish region.

The majority of displaced live in tents, and heavy rains have flooded and damaged the fragile, material structures in several camps.

Salim’s family lives in an unfinished building with five other Yezidi families.

“Rain often comes inside because the building is a bare concrete shell,” Salim said. “The owners have run out of funds to complete it.”

Such unfinished buildings are scattered throughout Kurdistan, and the displaced have been taking up residence in them.

CRS already has installed insulated windows and doors in 424 unfinished buildings in exchange for permission by the owners and the municipalities to allow the displaced to stay in these places for two consecutive winters. Four hundred more installations are underway.

“The cost is cheaper than buying a tent or any other alternative solution for them by far,” said El-Mahdi, adding that the installation is one-third of the price of a tent or even paying rent in a completed building.

“People prefer this. It’s much more dignified, safe and protected than putting them in camps,” he said. “It’s a win-win relationship for everybody.”

El-Mahdi said he expects that 10,000 families — 60,000 people — will be reached with practical nonfood items, the building project or a one-time cash assistance gift to help with winter. CRS is also working to develop safe play areas to help displaced children overcome the trauma of conflict.

“We are able to provide cash assistance because of private funds we have received from Catholics in the United States,” said of Kevin Hartigan, CRS regional director for Europe and the Middle East, who accompanied the group.

“The shelter work is funded by the U.S. and Canadian governments. But the cash assistance is from private Catholic family donations, money from special collections in September and other gifts from our supporters in the U.S.,” Hartigan told CNS.

In the village of Sarsing, surrounded by snow-capped mountains near Turkey’s border, hundreds of displaced minorities waited patiently in line to receive cash aid to help their families get through the winter months.

People from as far away as Sinjar and Anbar province have sought refuge in the remote northern area.

“This is where we found accommodation because most other places are full,” explained a Yezidi famer named Marden.

Hartigan visited Iraq in July and September, at the height of the Islamic State expulsions of Christians and other religious minorities.

“To see the change we’ve been able to bring about in some of these communities, particularly the shelter the people have for winter, is wonderful,” he said.

“At the same time, I’m struck again by the enormity of the crisis and still-unmet need. We realize, along with our peer agencies and the rest of the humanitarian community, the need to continue to scale up and expand our capacities and work as well as helping the local church to build its capacity as we try to continue assistance with shelter, water and sanitation. More importantly, we look forward to supporting education for displaced children,” Hartigan added.

NEXT: Christian leaders meet in Lebanon, call for end to financing terrorists