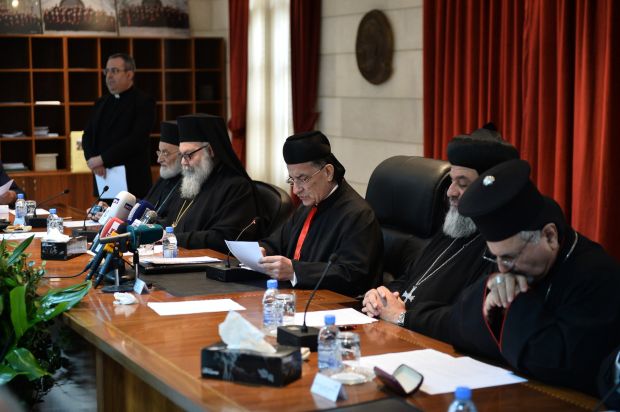 BEIRUT (CNS) — Catholic and Orthodox patriarchs called for an end to financing terrorists and suggested that borders be closed when necessary to prevent their movement.

The leaders also appealed for the creation of a Palestinian state with its capital in East Jerusalem, based on a long-standing proposal for a two-state solution to the Israeli-Palestinian crisis, and pleaded for the return of Palestinian refugees to their native lands.

Their calls came in a statement released after a meeting Jan. 27 in Bkerke, the seat of the Maronite Catholic Church north of Beirut, to address the situation of Christians in the Middle East, especially those displaced from Iraq and Syria. A representative of the Protestant churches of Syria and Lebanon as well as international aid officials also attended.

The ecumenical meeting comes on the heels of clashes that erupted between the Lebanese army and Syria-based militants in the outskirts of the town of Ras Baalbek, near the Syrian border. Eight Lebanese troops were killed and more than 20 were wounded.

The participants expressed “grief over the martyrdom of eight more Lebanese Army soldiers as they were performing the duty of defending the border in the face of the terrorist groups.”

The urgency of the situation was underlined by the fact that Cardinal Bechara Rai, patriarch of the Maronite Catholic Church, opened the meeting four days after undergoing surgery to treat a brain hemorrhage.

Issues addressed by the prelates will be raised at the College of Cardinals meeting in Rome Feb. 12 and 13 as well as by the patriarchs of Eastern Catholic Churches at their general assembly Feb. 17, the statement said.

The leaders voiced concern for the future of Christian youth in the region, saying young people have “no other choice but to emigrate.”

“Even if the churches double their services, they won’t manage to resolve these crises,” it said.

Referring to minority refugees from Syria and Iraq and to ongoing Mideast conflicts, the Christian leaders expressed “solidarity with all those who are suffering and wounded in dignity and deprived of their rights and with the hostages and prisoners of war subject to torture.”

Cardinal Rai said the meeting was “to unify our voices” to appeal to both the Arab world and the international community to provide the necessary assistance to the refugees and help them return to their homes and rebuild them.

He stressed the need for the displaced Christians of Iraq and Syria “to be able to stay in their home countries in order to preserve their Christian tradition and mission.”

Cardinal Rai noted that war, destruction and killing, displacement and evictions, waves of violence and the escalation of terrorist organizations were demolishing “the culture of moderation and openness and the Christian-Muslim civilization that we have built together through thick and thin over 1,400 years, having laid the foundations of Christianity in our countries before the advent of Islam.”

“It is known that the Israeli-Palestinian conflict and the Israeli-Arab conflict (are) at the basis of the tragedies of the Middle East in which we live today,” Cardinal Rai said.

In their statement, the leaders called on Middle East Christians to “unite their stances and work with all those who have good intentions in order to halt wars and acts of terror and revive a just and comprehensive peace in this suffering region of the world.”

They also denounced Lebanon’s presidential vacuum, saying it has led to parliamentary paralysis. The presidential post — which, under Lebanon’s constitution, is held by a Maronite Catholic — has been vacant since May 2014 as rival political blocs are still divided over a new leader.