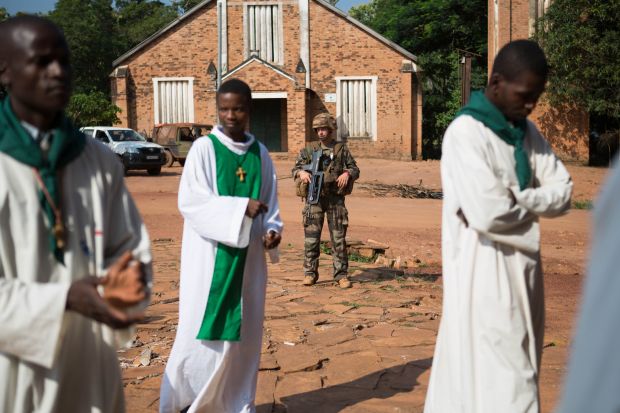 Bishop Nestor-Desire Nongo Aziagbia of Bossangoa told Catholic News Service Jan. 22 that the pope “responded positively” to an invitation from the bishops’ conference and that plans for the visit were being made.

“While the pilgrimage will strengthen the faith of Catholics here, we hope it will also help local politicians and civil society leaders bridge the gaps between them and direct them further toward dialogue and reconciliation,” Bishop Nongo said.

On his Jan. 20 flight to Rome from the Philippines, Pope Francis said he also planned to visit Uganda as part of his first papal trip to Africa.

While specific dates for the visit remained to be set, Archbishop Nzapalainga said it was decided that the pope would confine his stay to Bangui, the capital.

Logistics will prove to be particularly difficult because of a simmering conflict between Arab-speaking Islamists known as Seleka and a mostly Christian militia, known as Anti-Balaka. Although the country has experienced relative calm since the parties signed a peace accord in July, clashes have erupted at times as the underlying tensions between the various factions remain.

U.N. forces took over peacekeeping operations from a regional African force in September.

Catholic, Muslim and Protestant leaders have been working to bring peace to the country since December 2012, when Seleka rebels began a push to the capital to overthrow President Francois Bozize. The president fled, but conflicts continued for more than a year, forcing people to flee and claiming thousands of lives.

“International peacekeeping forces are already working with our government to set up the logistics and infrastructure, and the church will be engaged in this process,” Bishop Nongo told CNS.

“The Holy Father’s presence will be good news for everyone here, whatever their faith. It should be awaited with hope and expectation and not just seen as a security problem,” he added.

Addressing reporters Jan. 20 aboard his return flight from Asia, Pope Francis said his planned visit had been delayed by the outbreak of Ebola, but added that it would be ” a great responsibility” and said he expected to travel “toward the end of the year,” depending on the rainy season weather.

Bishop Nongo said the Central African Republic had faced “many difficulties and worsening security conditions” since the bishops invited the pontiff.

However, he added that Christian and Muslim leaders now enjoyed closer ties and would work together to ensure the pope was well received.

“After all the violence and suffering, we believe all sides are now ready to participate in this event,” the bishop said.

“We think the pope’s message of care and reconciliation will get through to our country’s population and genuinely help us rebuild our common home,” he said.

In a Jan. 10 pastoral message, the bishops’ conference said security appeared to have improved because of deployment by police and military forces and activity by local magistrates, as well as a growing readiness by Christian and Muslim communities to talk and rein in their “disorderly elements.”

However, it continued, “persistent hatred” and “strong cleavages” persisted in Bangui, Bambari, Kaga Bandoro and other towns, where the “massive circulation of arms” had maintained a “culture of violence and death.”

The bishops said they were also concerned about an “abominable practice of popular justice,” which had led to people being accused of sorcery and buried alive on the basis of “simple denunciations.”

“Unconventional armed groups are still recruiting young people, drugging them and using them against peace, unity and the common good,” the message added.

“The hour is grave and Central Africa is still dying, as obscure forces seek to regroup and impose their ideas and gain power,” it said.

PREVIOUS: Sainthood cause of Focolare’s founder officially opens in Italy

NEXT: Pope signs decrees in sainthood causes, including for U.S.-born priest