Sainthood cause of Focolare’s founder officially opens in Italy 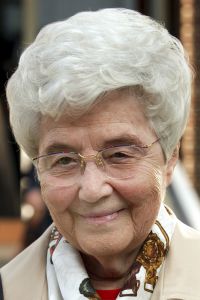 VATICAN CITY (CNS) — The sainthood cause of the founder of the Focolare movement, Chiara Lubich, was to open officially Jan. 27 in the cathedral of the Italian Diocese of Frascati, which includes the town where the international lay movement is based.

Bishop Raffaello Martinelli of Frascati was to preside at the opening ceremony, which will include the formal establishment of the tribunal that will study Lubich’s life and holiness.

The Congregation for Saints’ Causes authorized the opening of the diocesan inquiry into the potential sainthood of Lubich, who died March 14, 2008, at age 88.

Maria Voce, president of Focolare, said there is a huge amount of documents, letters and even videos of Lubich giving talks that they have turned over to the diocese for the tribunal that will study Lubich’s writings and interview people who knew her.

The collected information will be the basis for deciding whether Lubich lived the Christian virtues in a heroic way and deserves to be declared venerable. If so, the attribution of a miracle to her intercession would then be the normal requirement for beatification, and another miracle for canonization.

Lubich’s holiness can be seen in her ordinariness and how “you can be a saint by leading a normal life,” Voce told Vatican Radio Jan. 20.

Lubich’s holiness, Voce said, was seen not just in her own desire to live the Gospel, but also in her ability to attract others, even those who did not know the Gospel, and inspire them to follow her example and “put Gospel principles into action.”

Lubich was born in Trent, Italy, in 1920, and was christened Silvia. Her admiration of St. Clare of Assisi led her to adopt the name Chiara, the Italian form of Clare.

In 1943, after consulting a priest, she privately took vows consecrating herself to God and gradually began forming a circle of friends who read the Gospels together.

Gradually, the women decided to form a community and share everything they had with each other and with the poor. They sought a sense of family gathered around a hearth — “focolare” in Italian.

Focolare now has more than 2 million members and associates in 192 countries.

The lay movement aims to promote world unity through the living witness of Christian love and holiness in the family and small communities. It opened an ecumenical chapter in 1961 and began forging ties with Jews, Buddhists, Muslims, Hindus and others in the 1970s.

Voce told Vatican Radio that Lubich’s example as a “woman of dialogue” is needed today in a world witnessing so much strife.

“I think Chiara still has a lot to say about this, about building true, deep relationships between civilizations, ethnicities and religions in order to counteract this wave of violence that seems to have invaded the world,” she said.