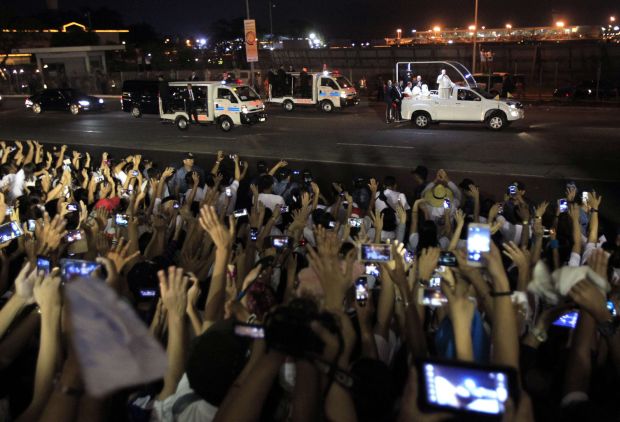 Pope Francis waves to the crowd upon arrival at the airport in Manila, Philippines, Jan. 15. Tens of thousands of people in the Philippines got their first glimpse of Pope Francis after the sunset along Manila Bay Jan. 15. Many of them came from the far corners of Metro Manila and others work and live on the very streets he passed. (CNS photo/Romeo Ranoco, Reuters)

MANILA, Philippines (CNS) — Pope Francis shot past the crowd very quickly during his first popemobile drive-by in Manila Jan. 15, but nobody seemed to mind that he was gone in a matter of seconds.

Ferdinand Agood, a retired overseas contract worker who lives on the opposite side of Manila from the papal motorcade, only saw the pope’s back.

“Pope Francis … it’s like I saw God,” he said, pointing at his heart. “I felt full because I looked at him.”

Sonny Rodriguez, 51, also saw just the pope’s back, but he told Catholic News Service he felt very happy. He is a street vendor who has spent countless years making a living by selling single cigarette sticks on Quirino Avenue, where the pope passed.

“I felt really calm,” said Rodriguez, who flashed a wide toothless smile. “It was like he soothed me.”

Crowds were ecstatic at the sight of Pope Francis. They cheered as they stood at video monitors set up around Manila’s biggest public park, watching the first moments after the pope stepped off the plane at Villamor Air Base.

Seeing the pope in person was also the first for Elpidio Balthazar, who drives a motorcycle passenger sidecar.

He told CNS he missed St. John Paul II’s last visit 20 years ago. This time, he felt lucky that Pope Francis was so close to his usual route, which is right on the edge of Rizal Park, where the pope will celebrate Mass Jan. 18.

“We are just so very happy because the pope came here to Manila for us poor people, and also that he came here for the entire Philippines,” Balthazar said. “I hope everyone (in the country) gets a glimpse of him.”

He said he was planning to take his wife and three children to the Mass at Rizal, which is expected to draw millions.

De la Cruz and her family had a plan to catch the pontiff’s attention. They took up their posts at 10 a.m. on the edge of the sidewalk along Quirino Avenue. They had to wait until well past 6 p.m. to carry out their plan.

She said he smiled at her and her family and waved.

The scene will be repeated throughout the papal visit as more throngs gather to see the pope. Church organizers said they wanted to give the masses “maximum exposure.”