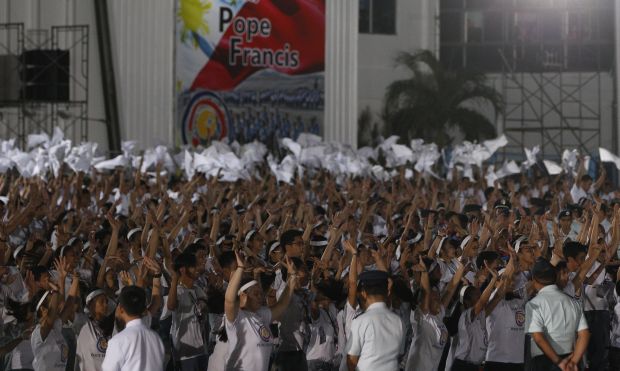 MANILA, Philippines (CNS) — Although it was not called a welcoming ceremony, Pope Francis was greeted by government and church officials and an exuberant crowd Jan. 15 at Manila’s Villamor Air Base.

The pope arrived 13 minutes earlier than scheduled at the base near Manila’s international airport following a six-hour flight from Colombo, Sri Lanka, over Vietnam and the South China Sea.

The pope’s evening arrival after such a long flight led trip organizers to schedule the formal welcoming ceremony for the next morning.

The speeches that are normally part of the formal ceremony were missing, as was the pope’s zucchetto. Almost as soon as he stepped out of the doors of the plane, a gust of wind blew his white skullcap away. He did get it back, eventually.

President Benigno Aquino III was on hand, as were young people from 19 different schools who choreographed a greeting with dancing and tumbling; they also used blue, red, white and yellow umbrellas to re-create the Philippine flag. 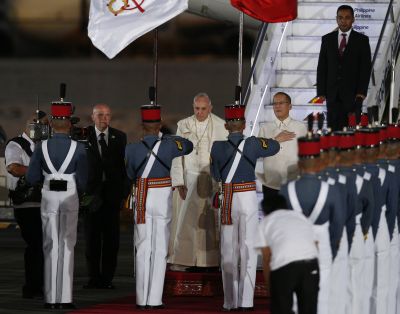 After a five-minute meeting with President Aquino in the airport VIP lounge, Pope Francis traveled by popemobile the 5.6 miles from the air base to the Vatican nunciature, where he was to stay Jan. 15-19.

Hundreds of thousands of people lined the route, often waiting hours for their quick glimpse of Pope Francis. While darkness fell over the city, the interior of the popemobile was lighted so people could see the pope standing and waving to them. The trip to the nunciature took just under 40 minutes.

Jesuit Father Federico Lombardi, Vatican spokesman, said as the popemobile and the pope’s entourage set out from the airport he thought, “tens of thousands, then a hundred thousand,” but he realized it was “many hundreds of thousands” of people lining the streets to see the pope.

“The pope is in good health,” Father Lombardi assured reporters. “Obviously, he comes here after four days of journeying and intense activity.” 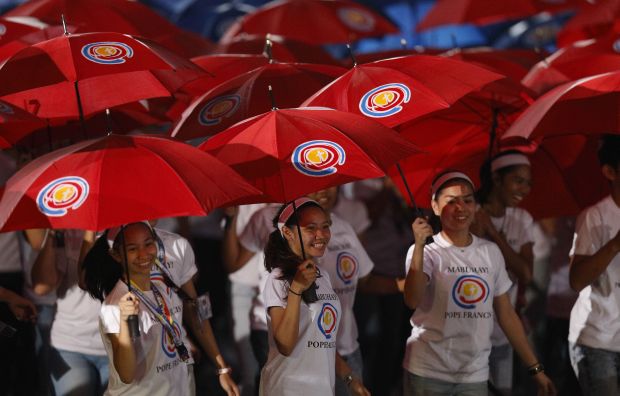 “But the pope has a charism,” he said. “If the pope sees people, if he is with people, as a pastor he draws energy from the people around him. … He seems to be encouraged and inspired and helped by the faith of the people present. In this sense, you will see he has new energy, even if he was tired before.”

A woman in the crowd, who had no idea what Father Lombardi was about to say, basically said the same thing.

As the popemobile approached, Marietta de la Cruz and her two adult children shouted, “We love you! Pope Francis!”

“He turned around and looked. It was so nice,” De la Cruz said. “We were surprised because we all know he’s only human and he gets tired. But what I noticed was he didn’t even look tired. He was smiling at us.”

In the early evening darkness, with the air hot and humid, the De la Cruz family was among thousands waiting restlessly for the pope’s arrival. A few left their posts along the street to check the pope’s progress on a television set at a bakery around the corner. But as the pope approached, everyone returned to the street. The buzz of chatter turned into screams and squeals of delight. Suddenly the pope was there.

The spokesman said Cardinal Luis Antonio Tagle of Manila, who rode in the popemobile with Pope Francis, said the pope told him, “The Holy Spirit has to work in these days for all these people, in the depths of their hearts, and to give them the grace they are expecting.”

NEXT: Crowds in Manila just get glimpses of pope on his first popemobile ride