Feed my sheep: Archbishops to receive palliums at home with their flock 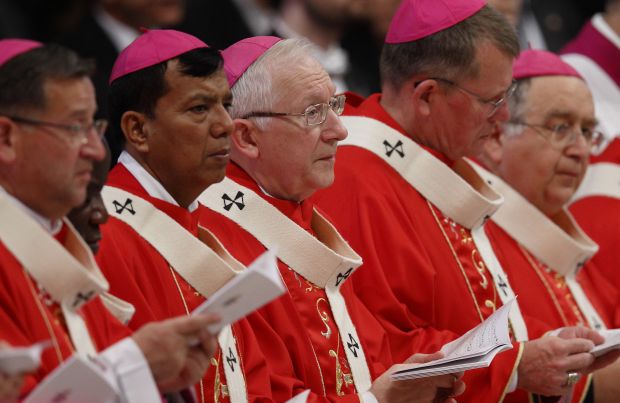 VATICAN CITY (CNS) — When Pope Francis celebrates the feast of Sts. Peter and Paul in June, he will set aside an element that has been part of the Mass for the past 32 years; the Vatican confirmed he will not confer the pallium on new archbishops during the liturgy.

Msgr. Guido Marini, the papal master of liturgical ceremonies, said Jan. 29 that the new archbishops will come to Rome to concelebrate the feast day Mass with Pope Francis June 29 and will be present for the blessing of the palliums, underlining their bond of unity and communion with him.

The actual imposition of the pallium, however, will take place in the archbishop’s archdiocese in the presence of his faithful and bishops from neighboring dioceses, he said.

The change will “better highlight the relationship of the metropolitan archbishops with their local churches, giving more faithful the possibility of being present for this significant rite,” Msgr. Marini said.

Archbishop Blase J. Cupich of Chicago, who was installed in the archdiocese in November, is expected to be among the concelebrants in Rome.

St. John Paul II — who began many of the Vatican practices that now seem like venerable ancient traditions — first placed the woolen bands around the shoulders of metropolitan archbishops at the feast day Mass June 29, 1983.

A truly ancient tradition, dating back probably at least to the sixth century, will not change: The pope blesses the pallium and concedes its use by certain bishops. The current Code of Canon Law stipulates that within three months of their appointment or consecration all metropolitan archbishops (residential archbishops who preside over an ecclesiastical province) must request a pallium from the pope.

“The pallium signifies the power which the metropolitan, in communion with the Roman church, has by law in his own province,” it says. The code, however, does not specify that the pallium be received from the hands of the pope.

In 1982 on the eve of the feast day, Pope John Paul went down to the grotto of St. Peter’s Basilica to pray before the tomb of St. Peter and bless the palliums that were to be given “to the metropolitan archbishops to be created by the Holy Father,” according to a description in Attivita della Santa Sede (Activity of the Holy See), an annual publication that includes a day-by-day description of the activities of the pope.

The next year, Pope John Paul made the change. After the homily, five archbishops who had been named in the previous year to archdioceses in Italy, Wales and Chile, approached the pope, knelt and received the wool bands marked with crosses. Other archbishops named during the year received their palliums from the nuncio or papal representative in their countries.

In his homily, Pope John Paul had explained, “during this celebration the blessing and the imposition of the pallium on certain, recently named archbishops will take place.”

The blessing of the pallium near the tomb of St. Peter and by his successor, the pope, “has always been seen … as a participation in the ‘feed my sheep’ said by Jesus to Peter,” Pope John Paul said.

In fact, the woolen bands, which are about 3 inches wide and have 14-inch strips hanging down the front and the back, are tipped with black silk to recall the dark hoof of the sheep the archbishop is symbolically carrying over his shoulders.

Personally placing the palliums on the archbishops, Pope John Paul said, “signifies that the pallium imposed on you, dear brothers in the episcopate, is a symbol of privileged communion with the successor of Peter, principle and visible foundation of unity in the field of doctrine, discipline and pastoral work.”

At the same time, he said, the pallium should signify “a greater commitment to love for Christ and for souls. Such love for the flock of Christ, shepherd and guardian of our souls, will help you carry out your ministry of service,” he said. “The doctrine you offer will be fruitful if nourished with love.”

Already this year, Pope Francis has kept part of the tradition connected to the palliums. On the Jan. 21 feast of St. Agnes, he blessed two lambs raised by Trappist monks outside Rome. Benedictine nuns at the Monastery of St. Cecilia in Rome will use wool from the blessed lambs to make the bands, which will be kept by St. Peter’s tomb until the pope blesses and distributes them.

The change Pope Francis decided for 2015 was not a complete surprise given his suggestion that Argentine bishops and faithful not spend huge sums to come to Rome for his own installation as pope in 2013 — and that they use the money they would have spent for the poor — and his encouragement to new cardinals to keep celebrations of their new roles to a dignified minimum.

In June 2013, Archbishop Michael O. Jackels of Dubuque, Iowa, was in the first group of archbishops to receive their palliums from Pope Francis. At the time, he told Catholic News Service, “To be quite honest, I was kind of hoping that maybe he would send the pallium by way of FedEx and say, ‘Save the money and give it to the poor.'”