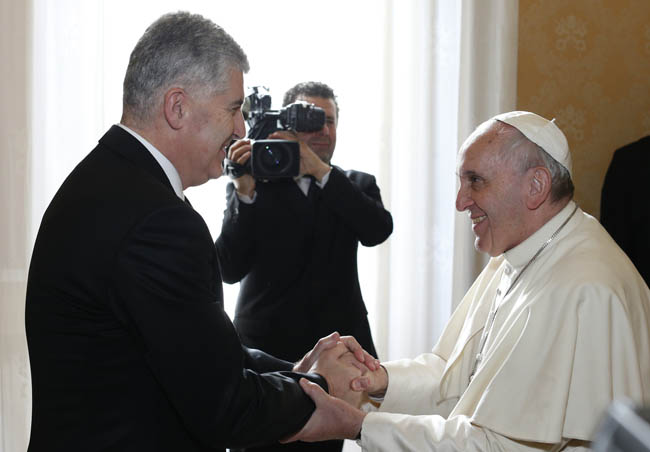 Pope Francis greets Dragan Covic, Croat member of the presidency of Bosnia-Herzegovina, during a private audience in the Apostolic Palace at the Vatican Dec. 15, 2014. The pope will make a one-day visit to the country June 6, he announced Feb. 1 in Rome. (CNS photo/Paul Haring)

VATICAN CITY (CNS) — In an effort to help bolster a minority Catholic population and encourage dialogue and friendship among once-warring ethnic and religious communities, Pope Francis announced he would be visiting Bosnia-Herzegovina.

The pope said he hoped the one-day trip June 6 to Sarajevo, the capital, would help “be an encouragement for the Catholic faithful, give rise to the development of the good and contribute to strengthening fraternity, peace, interreligious dialogue and friendship.”

The pope made the surprise announcement Feb. 1 after praying the Angelus with those present in St. Peter’s Square.

It will be Pope Francis’ eighth trip abroad and the 11th country he visits outside of Italy since his election two years ago.

The Balkan nation, which is struggling to rebuild itself after a devastating war marked by ethnic cleansing, is still largely divided along ethnic lines. Bosniaks make up 48 percent of the country’s nearly 4 million people, while Serbs make up 37 percent and Croats 14 percent. About 40 percent of all citizens are Muslim, 31 percent Orthodox and 15 percent Catholic.

Although the 1995 Dayton Peace Accords ended the 1992-1995 war, the complex political structures the peace deal established meant the mostly Catholic Croat community became powerless and discrimination against them grew, according to Bosnia’s bishops.

The 1992-1995 conflict saw a Serb campaign of ethnic cleansing of Bosnian Muslims after the mostly Muslim Bosnia-Herzegovina declared independence from Yugoslavia in 1992. More than 200,000 Muslims and tens of thousands more were killed in the conflict, more than 600 Catholic churches were destroyed and hundreds of thousands of Catholics were forced to flee certain regions.

Although the 1995 Dayton Peace Accords ended the fighting, the complex political structures the peace deal established — with one area administered by ethnic Serbs and another by a Muslim-Croat federation — meant the mostly Catholic Croat community became powerless and discrimination against them grew, according to Bosnia’s bishops.

During their “ad limina” visit to the Vatican in 2006, the bishops told journalists that Catholics were slowly “becoming second-class citizens in our own country.”

Cardinal Vinko Puljic of Sarajevo said at the time that Bosnia-Herzegovina is “a confused country” whose complex political structure is unsustainable, unjust and must be changed. Corruption and political stalemate are said to be rampant.

It has the highest youth unemployment rate in the world with nearly 63 percent of 15- to 24-year-olds without work. The overall unemployment rate of about 44 percent and a perceived sense of political inaction to address the country’s economic woes have led to a series of protests and demonstrations in some cities.

St. John Paul II visited Bosnia-Herzegovina twice in his 26-year-long pontificate: in 2003, and in 1997 when he celebrated Mass in a snowstorm in the war-ravaged capital Sarajevo. The nation, he said later, was “a symbol of the contradictions and hopes” of the 20th century.’

Pope Francis is expected to repeat the late-pope’s calls for a change of heart and living one’s faith as the key to solving social and political problems, and building a culture of forgiveness, reconciliation and respect.

Pope Francis had been invited to Sarajevo last year to mark the 100th anniversary of the beginning of the First World War, which was triggered by the assassination of the Austro-Hungarian heir to the throne in Sarajevo on June 28, 1914.

The pope’s visit will fall on the anniversary of D-Day, June 6, 1944, when the Allied invasion of Normandy marked the start of the Allies massive push into occupied Western Europe during World War II.

Bosnia-Herzegovina is also the nation where Medjugorje is located. A Vatican commission of cardinals, bishops, theologians and other experts, working under the auspices of the Vatican’s doctrinal congregation, is still studying the events at Medjugorje, where six village children said they first saw Mary in June 1981. The visionaries have said they still see apparitions and that they have received more than 40,000 visits from Mary.

PREVIOUS: Feed my sheep: Archbishops to receive palliums at home with their flock

NEXT: ‘A burqa made of flesh’: Vatican looks at challenges women face