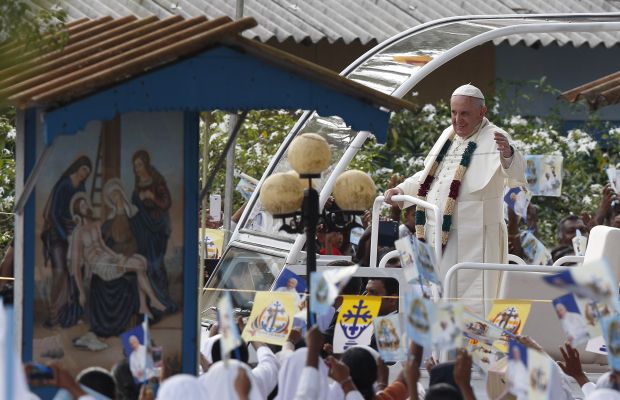 Pope Francis greets the crowd as he arrives to prays at the Sanctuary of Our Lady of the Rosary in Madhu, Sri Lanka, Jan. 14. (CNS photo/Paul Haring)

COLOMBO, Sri Lanka (CNS) — Pope Francis told Sri Lankans seeking reconciliation after two-and-a-half decades of civil war that, before they can forgive each other, they must repent of their own sins.

“Only when we come to understand, in light of the cross, the evil we are capable of, and have even been a part of, can we experience true remorse and true repentance. Only then can we receive the grace to approach one another in true contrition, offering and seeking true forgiveness,” the pope said Jan. 14, during a prayer service in the northern jungle town of Madhu.

The pope had traveled 160 miles in a helicopter from the capital city of Colombo to visit the shrine of Our Lady of the Rosary, which houses a statue of Mary venerated by Sri Lankans since the 16th century.

During the 26-year struggle between government forces and rebels from the country’s Tamil minority, which ended in 2009, both sides recognized the area around the shrine as a demilitarized zone, which served as a sanctuary for thousands of war refugees. However, in 2008, the historic statue had to be removed temporarily from the shrine when it came under crossfire.

The 300,000 people assembled for the pope’s visit included families who had lost members during what he described as a “long conflict which tore open the heart of Sri Lanka.”

Pope Francis invoked Mary, who “forgave her son’s killers at the foot of the cross,” saying she would guide the country to “greater reconciliation, so that the balm of God’s pardon and mercy may bring true healing to all.” 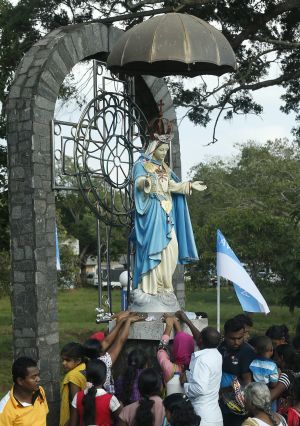 Pilgrims venerate a statue of Mary as Pope Francis prays at the Sanctuary of Our Lady of the Rosary in Madhu, Sri Lanka, Jan. 14. (CNS photo/Paul Haring)

He described the shrine as “our mother’s house,” where “every pilgrim can feel at home,” and where members of the country’s two main ethnic groups, “Tamil and Sinhalese alike, come as members of one family.”

“Just as her statue came back to her shrine of Madhu after the war, so we pray that all her Sri Lankan sons and daughters may come home to God in a renewed spirit of reconciliation and fellowship,” the pope said.

Later, Father S. Emalianuspillai, rector of the Madhu shrine, described the pope’s three-hour visit as “wonderful and amazing. Everyone one was thrilled and excited with the visit of the Holy Father to this far-off shrine.

“It will help the renewal of faith and strengthen our people in their spiritual lives,” he said.

After landing at Madhu, the pope rode a mile to the shrine in a popemobile, then spent half an hour greeting devotees. He also blessed a group of 2,000 sick and disabled people, including many who had been injured during the war.

The prayer service stressed national unity, with prayers in both the Tamil and Sinhalese languages. The short Bible reading from the Gospel of St. Matthew blessed mourners, peacemakers and victims of persecution. Pope Francis also released a dove as a sign of peace.

At the end of the liturgy, Pope Francis raised the statue to bless the crowd with it, then placed a rosary around its neck as an offering. He went inside for a few minutes of private devotion before leaving for the helipad. 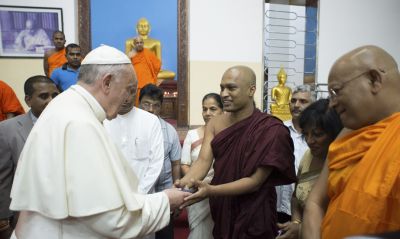 After returning to Colombo, the pope paid an unscheduled visit to a Buddhist temple at the headquarters of the Maha Bodhi Society, responding to an invitation he had received the previous day from its head priest, the Venerable Banagala Upatissa.

Jesuit Father Federico Lombardi, Vatican spokesman, said the pope removed his shoes to enter the temple, where he was given a rare look at some relics of two disciples of the Buddha and listened while some monks prayed.

Asked if the pope himself had prayed, Father Lombardi said there had been no moment of silence during the visit, which he described as relaxed and “not a particularly solemn occasion.”

It was at least the second time a pope had visited a Buddhist temple, following St. John Paul II’s visit to a temple in Bangkok in 1984.

The Madhu pilgrimage was the pope’s last major public event over two days in Sri Lanka and reinforced his calls to reconciliation the day before, in speeches to President Maithripala Sirisena and at a meeting with other religious leaders. Pope Francis was scheduled to leave for the Philippines early Jan. 15.