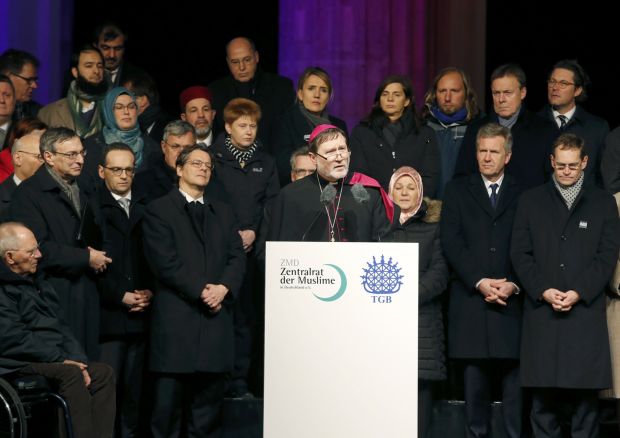 OXFORD, England (CNS) — German church leaders have criticized an anti-Islamic movement that staged mass demonstrations in Dresden and other cities, but they also urged a better understanding of public fears.

“This movement looks set to grow — and the Catholic Church totally distances itself from it,” said Michael Baudisch, spokesman for the Dresden Diocese.

“But we also have to speak to those involved, many of whom nurse frustrations about the political process and their lack of life chances. Far from just branding them extremists, our bishops think we must consider their opinions and aims.”

Jan. 12 rallies by “Patriotic Europeans Against Islamicization of the West,” known by its German acronym as Pegida, were attended by 25,000 people in Dresden and thousands more in other cities. However, rival marches across the country the same day also drew tens of thousands in various cities.

Baudisch told Catholic News Service Jan. 14 that Muslims made up only 2 percent of the population of Dresden and surrounding state of Saxony, compared to a much larger Muslim presence in Berlin, Mannheim and other regions.

However, he added that protesters had flooded to Dresden from other parts of Germany “to find a place where they can feel strong with those who think and feel the same.”

“Fear of Islamicization, however exaggerated, is being used as a banner for many frustrations, from disenchantment with political parties to dislike of the European Union,” Baudisch told CNS. “The church’s leaders believe we must talk to people and see which problems can be discussed and which merely reflect anti-democratic prejudices.”

Pegida has organized numerous rallies since its formation in October with a 19-point manifesto calling for protection of Germany’s Judeo-Christian culture.

Among Catholic church reactions, the lights of Cologne’s historic cathedral were switched off in protest Jan. 5-6, after the city’s archbishop, Cardinal Rainer Woelki, joined 80 other top personalities in a media statement against Pegida.

In a Jan. 13 Catholic radio interview, Bishop Heiner Koch of Dresden said 80 percent of Pegida supporters were “not right-wing extremists,” but people “who feel marginalized and no longer understood by society.”

Meanwhile, Bishop Gerhard Feige of Magdeburg said Pegida could not be seen “as expressing the Christian faith” or reflecting a wish to “save the Christian West,” but had clearly been fueled by “fears of a slippery slope reinforced by immigration.”

“However, the church must seek a dialogue with the protesters if possible. This will be more helpful than just ruggedly distancing ourselves from them,” he said.

Addressing the 3,000-strong crowd, German Chancellor Angela Merkel said Islam was “part of Germany,” adding that she saw herself as “chancellor of all Germans, whatever their background or origin.”

NEXT: Waiting for the pope, Philippine family reflects on dreams, blessings