In Philippines, spirituality includes warfare against forces of darkness 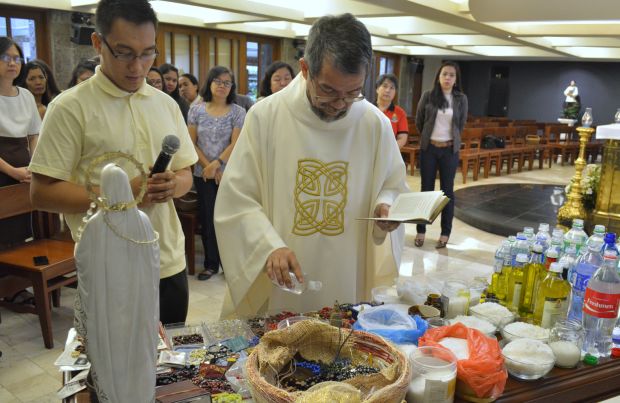 Msgr. Jesus-Norriel Bandojo, a priest in the the Office of Exorcism of the Manila Archdiocese in the Philippines, gives a blessing and says a prayer of deliverance over sacramentals in late October at the archdiocese offices chapel to ward off the possibility of evil forces attaching themselves to the religious items. (CNS photo/Simone Orendain)

MANILA, Philippines (CNS) — In the months leading up to Pope Francis’ visit to the Philippines Jan. 15-19, church leaders emphasized “spiritual preparation,” such as a special prayer for the pope at the end of each Mass and a reminder to carry out small acts of kindness toward the less fortunate.

Along with prayerful devotion to Jesus, the Virgin Mary and veneration of the many saints, another aspect of the faith in this overwhelmingly Catholic country is its consideration of the forces of darkness and spiritual warfare.

At the spacious chapel inside the main building of the Manila Archdiocese, Msgr. Jesus-Norriel Bandojo said a prayer as he poured holy water into water bottles and bottles of olive oil and sprinkled it on colorful rosaries, rock salt, a selection of saints’ medallions and icons of various religious figures, all crowding a table on one side of the altar. He said the items had to be “cleansed” of any possible evil spirits hanging around them, waiting to take advantage of their unsuspecting owners.

Msgr. Bandojo, an exorcist-in-training, had just concluded a Mass for archdiocesan employees.

Some archdiocesan workers invited Msgr. Bandojo especially because, they said, there was too much bad health going around at the office.

Sylvia Gamboa, a supervisor for the archdiocesan properties department, said: “We have so many that have had operations … one employee had spinal surgery twice, another, his shoulder … someone a full hysterectomy.”

Gamboa told Catholic News Service there were other cases of colleagues taking ill, sometimes without explanation, all within the month that they had scheduled the exorcists’ Mass. They could not say for sure what the cause was for the streak of bad luck with poor health, but Gamboa said having the Mass and Msgr. Bandojo’s talk on exorcism could only help to strengthen their faith against any possible evil work behind it.

At the Office of Exorcism of the Manila Archdiocese, Father Jose Francisco Syquia, chief exorcist, said in oppression, one of the stages toward full demonic possession, misfortunes such as poor health with no clear medical explanation can affect a person.

Father Syquia said that, at any given time, the office handles 30 cases of demonic possession from across the country, an increase from 10 years ago. Far worse than bad luck, these involve evil spirits taking over people, causing them to do things without normal explanation such as read minds, levitate and speak in Latin with no prior exposure to the language.

In his office lined with shelves of psychology, theology and exorcism books, Father Syquia, a Rome-trained exorcist, said some cases involve several priests having to pin down the possessed person while reciting prayers.

He said in the Philippines, an increased interest in the occult is one of the main culprits of possession today.

“Many people who enter Satanism and the New Age are actually searching for a tangible experience of God,” Father Syquia told CNS. “They are not evil people. They are usually people who have been deceived because man really has a tendency to look for God, for the divine. That’s where Satan comes in, through man’s curiosity.”

Father Syquia said the oldest example of this is the story of creation, when Eve’s curiosity led her to be tricked by Satan into believing she could be God-like if she simply ate the forbidden fruit.

He said in the same way, people’s curiosity about the preternatural world leaves “openings” where evil spirits can latch on. And these openings can occur when a person delves into the occult or nurtures paranormal powers like clairvoyance, repeatedly sins without remorse or experiences serious trauma early in life that accompanies unwillingness to forgive.

Father Syquia said often times a person, who believes he or she is possessed, tries to get help in the wrong places.

“Here in the Philippines we have a lot of occult practitioners they first go to before they even think of going to the church,” he said. “We have a lot of faith healers … people into witchcraft … people who are into these superstitious practices. By the time they come to us they already have deep bondage.”

The exorcist said the oldest religious practice in the Philippines was animism, a belief that elements of nature and some inanimate objects have spirits. And that these beliefs lend themselves to superstitious practices.

Depending on how deep the bondage is, a possessed person may have to go multiple exorcisms, he said. But real help comes only when the person turns to God fully.

In a book he wrote on exorcism called “Exorcism, Encounters with the Paranormal and the Occult,” Father Syquia said a possessed person “must choose God with as much passion as he can muster. This would then release any ‘right’ the devil has over the person.”

NEXT: Spain’s new cardinal-designate is advocate of dialogue, reconciliation