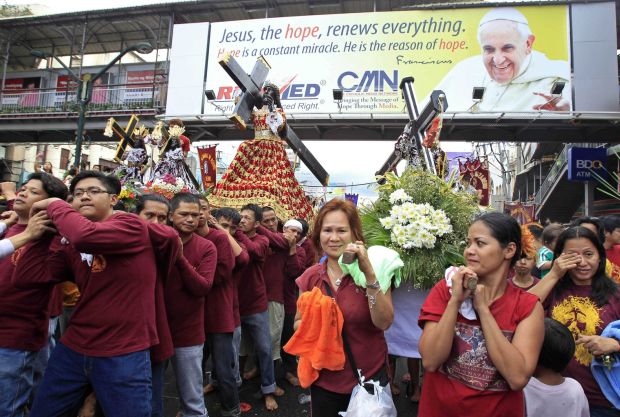 Men and women carrying replica statues of the Black Nazarene walk under a banner of Pope Francis during a procession in Manila, Philippines, Jan. 7. (CNS photo/Romeo Ranoco, Reuters)

VATICAN CITY (CNS) — Interreligious reconciliation and recovery from natural disaster will be major themes of Pope Francis’ Jan. 13-18 visit to Sri Lanka and the Philippines, according to the Vatican spokesman.

Jesuit Father Federico Lombardi briefed reporters on the trip Jan. 7, noting that it would be the pope’s second time in Asia, following an August visit to South Korea. Pope Francis wanted to give the region special attention, the spokesman said, because no Asian country had received a papal visit in more than a decade, since the pontificate of St. John Paul II.

Pope Francis will be the third pope to visit Sri Lanka, where Blessed Paul VI traveled in 1970 and St. John Paul visited in 1995.

Like his predecessors, Pope Francis will stress the importance of interreligious harmony in a country that is less than 7 percent Christian. An interreligious meeting in Colombo Jan. 13 will feature speeches by the pope and a Buddhist monk representing the faith of almost 70 percent of the country’s citizens.

On Jan. 14, following a Mass in Colombo at which he will canonize the 17th- and 18th-century missionary Blessed Joseph Vaz, Pope Francis will travel by helicopter to Madhu, in the country’s north. He will pray the rosary at a Marian shrine there that provided sanctuary to thousands of refugees during a three-decade-long civil war, which ended in 2009 after killing an estimated 100,000 people.

Catholics have had a special role in post-war reconciliation, Father Lombardi said, because they straddle the ethno-religious divide between the Sinhalese-Buddhist majority and the Tamil-Hindu minority. The shrine of Our Lady of Madhu also draws non-Christian devotees who see it as symbol of national unity, the spokesman said.

In Sri Lanka, a prominent advocate for reconciliation hailed the pope’s pilgrimage.

“The Madhu visit is historic. It is an opportunity for meeting the war victims, healing and reconciliation,” Jehan Perera, executive director of the National Peace Council, told Catholic News Service Jan. 7.

The pope will ride in an open popemobile several times during his trip, including on a Jan. 17 visit to Tacloban in the central Philippines, a region especially hard hit by Typhoon Haiyan in 2013.

The devastation of that storm, as well as other natural disasters including earthquakes and fires, will be a particular concern for the pope during his stay in the Philippines, where he arrives Jan. 15.

In Tacloban, Pope Francis will lunch at the archbishop’s residence with some 30 survivors of the typhoon, many of whom lost close relatives in the disaster.

Another highlight of the Philippine leg will be the pope’s Jan. 16 meeting in Manila with various families, including one led by its 100-year-old matriarch, accompanied by her great-great-grandchildren.

The same day, he will celebrate Mass in Manila’s cathedral with bishops, priests and members of religious orders. An unusual feature of that liturgy will be a penitential rite in which members of the congregation will confess to breaking vows of poverty, obedience and chastity.

Pope Francis’ trip will culminate in what Father Lombardi called a “mega-Mass” Jan. 18 in Manila, on the same site where St. John Paul celebrated Mass for World Youth Day in 1995 before more than 4 million people — often described as the largest live crowd in history.

The spokesman noted that St. John Paul was forced to take a helicopter to reach the altar on that occasion, because the density of the crowd made it impossible to drive.

Pope Francis will deliver all of his speeches and homilies during the trip in English, Father Lombardi said. He also suggested the pope might give two inflight news conferences: first, en route from Sri Lanka to the Philippines Jan. 15, then on the way back to Rome Jan. 19.

NEXT: In Philippines, spirituality includes warfare against forces of darkness