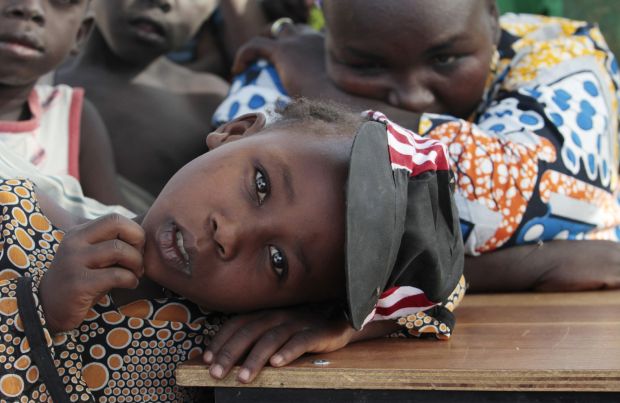 A girl displaced as a result of Boko Haram attack in the northeast region of Nigeria rests her head on a desk at a camp for internally displaced people in Yola Jan. 13. (CNS photo/Afolabi Sotunde, Reuters)

MANCHESTER, England (CNS) — What do Nigerian church leaders say to a woman who, pregnant and fleeing Boko Haram extremists, realizes that she is not physically capable of escaping with both of her two other children and has to abandon one of them?

This kind of situation — which formed a theme of the 1982 movie “Sophie’s Choice,” in which a mother had to choose which of her children was sent to a Nazi death camp — is being played out in real life in Nigeria, said Archbishop Ignatius Kaigama of Jos.

“Priests are working hard to help the families of the victims spiritually, through prayers and counseling,” Archbishop Kaigama said in a Jan. 19 email to Catholic News Service.

Referring to the pregnant woman and her choice, he said: “Such a woman would be seriously traumatized. Priests try to help in whatever way possible.”

The archbishop said one of the biggest challenges facing the church is to try to stop victims of Boko Haram, a Muslim militant group in northeast Nigeria, from falling into despair.

“The activities of Boko Haram are faith-threatening,” Archbishop Kaigama said. “The people are wounded and full of questions. At this point, there is nothing more than giving them hope. The church identifies with them in their pain and gives them a sense of belonging.

“Through homilies, pastoral letters, visits to refugee camps and one-on-one interactions and prayers, we encourage one another with the understanding that we are in it together,” he said. “Our faith tells us that as members of Christ’s body, an injury to one part is an injury to all. Now more than ever Scripture, which is the bedrock of our Christian faith, is calming and soothing.”

The church in Nigeria is “on her knees,” praying for “God’s intervention on the multi-dimensional security challenges plaguing the country as a result of the activities of the nefarious Boko Haram sect,” he added.

Archbishop Kaigama said that the “top of the agenda” for the bishops was the “need for the government to revise its strategy to confront the menace of Boko Haram.”

“We spoke about the increasing numbers of internally displaced people and how they need to be catered for effectively by government in the short and long terms,” he said. “We informed Mr. President of how we have encouraged parishes, church societies, individuals and families to accept the internally displaced people with generosity of heart and to help out in whatever little way possible.

“We are optimistic however that the situation will stabilize by God’s grace and, when this happens, support by dioceses not affected will continue at the spiritual and material levels to help the people rebuild their lives,” he said.

An estimated 1.5 million Nigerians have been forced from their homes since the Boko Haram insurgency began in 2009. At least 11,000 have been killed, culminating with the alleged killing of 2,000 people in Baga in early January, when Boko Haram razed thousands of homes in their path.

“Some priests are among the displaced people because their parishes have been destroyed,” he said. “The affected priests of Maiduguri Diocese have been distributed to neighboring dioceses.”

He spoke of Augustinian Sisters whose convent, clinic and novitiate were attacked; they are taking temporary shelter in another diocese.

In general, church officials try to register the displaced when they arrive. The archbishop said that in the Diocese of Maiduguri, the worst-affected by the violence, Bishop Oliver Dashe Doeme has established the St. Judith Widow’s Association to care for the growing number of women with families whose husbands have been killed by Boko Haram.

In the Archdiocese of Abuja, more than a hundred refugee children have been given places in one parish school alone, while the Diocese of Jalingo in eastern Nigeria has accepted displaced seminarians into its own priest training college.

Archbishop Kaigama told CNS that the bishops’ Department of Interreligious Dialogue is doing a “wonderful job” because “more Muslim organizations and prominent leaders relate with Christian groups and individuals, and together (they) are denouncing Boko Haram as evil and are working to promote the genuine values of religion and to denounce terrorism, which contradicts everything any civilized religion stands for.”

“I would appeal for more international support, either by way of intelligence advice, technical/relief support and indeed political goodwill,” he added. “The attacks are still going on and the number of those affected continues to rise. We would need the kind support of our friends, brothers and sisters internationally to complement the effort of the Nigerian government.”

He also said the church will not stop praying for an end to the attacks.

“Who knows, but for the prayers, the situation would have been worse,” he said.