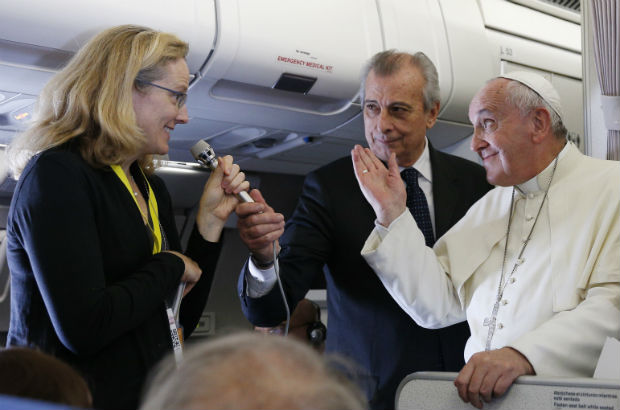 Pope Francis reacts to questions from Associated Press reporter Nicole Winfield about the September U.S. papal visit during a news conference aboard his flight from Manila, Philippines, to Rome Jan. 19. (CNS photo/Paul Haring)

ABOARD THE PAPAL FLIGHT FROM MANILA, Philippines (CNS) — Pope Francis stressed that, despite church doctrine against contraception, Catholics fail to practice “responsible parenthood” when they have too many children.

He also denounced the teaching of “gender theory” in schools, likening it to indoctrination of children by the Nazis and fascists.

The pope made his remarks Jan. 19 in an hourlong news conference with reporters accompanying him back to Rome from a weeklong trip to Asia.

Pope Francis reaffirmed his rejection of population-control programs as an example of ideological colonization and his praise of Blessed Paul VI for defending Catholic teaching against contraception.

But “this does not mean a Christian must make children one after another,” the pope said, citing the case of a woman who became pregnant an eighth time after giving birth to seven children via cesarean section.

“Does she want to leave seven orphans?” he said. “This is tempting God.”

“Some people think — excuse me for saying this — that to be good Catholics we have to be like rabbits,” Pope Francis said, yet church teaching provides for “many licit ways” to limit reproduction.

Elaborating on comments he made in Manila Jan. 16 about “ideological colonization that tries to destroy the family,” the pope offered a 20-year-old example of an unnamed government official, apparently in his native Argentina, who was offered a loan to build schools for poor children on the condition she assign students a textbook on “gender theory.”

Catholic leaders often use the term “gender theory” to refer to ideas that question or deny the God-given nature of sex differences and the complementarity of man and woman as the basis of the family.

Pope Francis said African bishops attending the October 2014 Synod on the Family had complained of similar restrictions on funding for projects in their countries,

“Why do I say ideological colonization? Because they use a people’s need as an opportunity to come in and impose their will on children. But this is nothing new. The dictatorships of the last century did the same thing; they came in with their doctrine. Think of the Balilla. Think of the Hitler Youth,” the pope said.

The Balilla was a youth organization instituted by Italy’s fascist dictator, Benito Mussolini.

One reporter asked the pope to explain his controversial Jan. 15 statement, prompted by the recent killings by Islamist terrorists at a Paris newspaper, that freedom of expression should be limited by respect for religion and that mockery of faith can be expected to provoke violence.

“In theory, we can say what the Gospel says, that we should turn the other cheek. In theory, we can say that we have freedom of expression,” he said. “But in practice, let’s stop a bit, because we are human and we risk provoking others. For this reason, freedom must be accompanied by prudence. That’s what I wanted to say.”

Asked about the limited response to his calls on Muslim religious, political and intellectual leaders to condemn violence in the name of religion, Pope Francis said “some of them have done something, but we need to allow a little time, because the situation is not easy for them. I have hope, because there are so many good people among them, so many good people, so many good leaders, and I am sure they will do it.”

Pope Francis explained his refusal to meet with the Dalai Lama in December, when the exiled Tibetan leader was in Rome for a conference of Nobel Peace Prize winners. He said Vatican protocol prevents the pope from “receiving heads of state and people at that level when they are taking part in an international meeting.”

Pope Francis denied his decision was motivated by fear of the Chinese government, which considers the Dalai Lama an outlaw, and which has often arrested Chinese Catholics who oppose government control of the church. The Vatican has not had diplomatic relations with China since shortly after the country’s 1949 communist revolution, but the pope said both sides treated each other respectfully, and he reiterated his openness to meet with Chinese leaders in Beijing or Rome.

While addressing the weightiest topics, the pope once again displayed his disarmingly frank and informal way of speaking. During extended remarks on the evil of government corruption, he recalled being solicited for a bribe by Argentine officials.

“At that moment, I thought about what I would do: either I insult them and give them a kick where the sun doesn’t shine or I play the fool,” Pope Francis said. “I played the fool.”