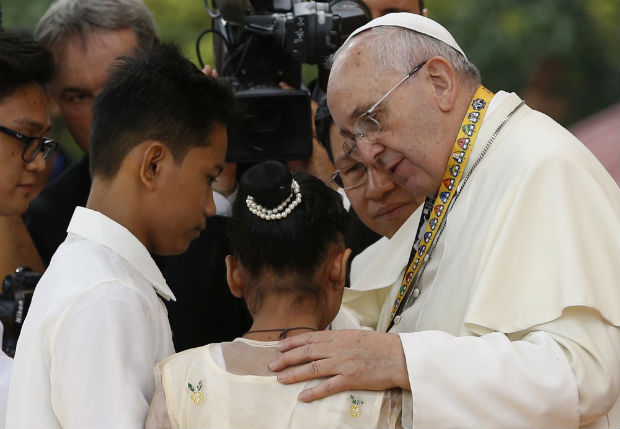 MANILA, Philippines (CNS) — Young people drew inspiration from an encounter with Pope Francis at the University of Santo Tomas.

Rain started to fall the moment the pope took the stage before a sea of young people in bright-colored T-shirts, but the 30,000 students and youth leaders remained rooted in their sections, listening to the pope urging them to cry, to love and to think, feel and act.

Csherina Sanchez said she was inspired by his words.

“He shows me, really, that asking and crying (for) the poor is something that I should be brave about doing,” she told Catholic News Service. “He said that true Christians should cry. For me it’s a really good message.”

Sanchez, 25, a student at Manila’s Emmanuel School of Mission, explained: “As Asians we have this tendency to keep negative feelings. Positive feelings we can express freely. But in terms of negative ones like sadness, fear, we keep it inside. And it’s really a freeing message that it’s OK to cry. It’s good to cry.”

Father Mark Anthony of the Diocese of Virac equated crying with empathy.

“If you know how to cry, you can actually know how to give compassion to others,” said Father Tasarra, 33. “This is a very Christian thing.”

He told CNS the pope’s directive for the young people to learn how to cry was inspiring “because sometimes I’m not so compassionate even though I’m a priest. So I have to express my emotion.”

As Pope Francis arrived his popemobile, young people ran from one corner of the sports field to another, trying to keep pace with the beaming pontiff.

Celine Villarin, 19, a member of the Student Catholic Action of the Philippines, said she could not find the words to say why the pope makes such a huge impression.

“I don’t really know, but there is something really magical in him that when you see him, goose bumps are really felt all over you,” she told CNS.

She called the pope’s message very simple “but I think it really moved us all … The way he talks, he uses simple words, and that’s why he really touches the heart of every Filipino youth.”

NEXT: Pope, at Mass with millions, tells Filipinos to protect the family