Pope, at Mass with millions, tells Filipinos to protect the family 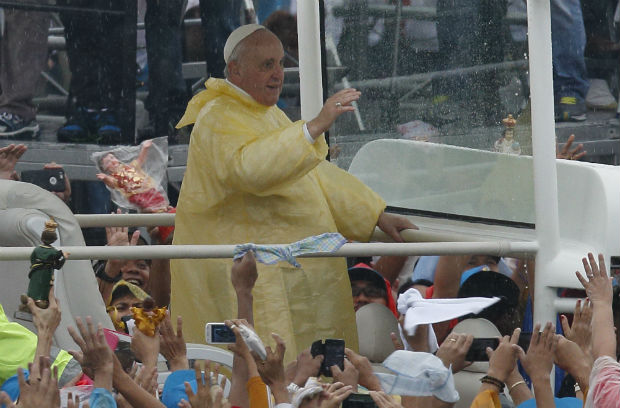 MANILA, Philippines (CNS) — Pope Francis told a crowd of an estimated 6 million gathered in a Manila park to protect the family “against insidious attacks and programs contrary to all that we hold true and sacred, all that is most beautiful and noble in our culture.”

The pope’s homily at the Jan. 18 Mass also reprised several other themes he had sounded during the four-day visit, including environmental problems, poverty and corruption.

Despite continuous rain, the congregation in Rizal Park began to assemble the night before the afternoon celebration. Cardinal Luis Antonio Tagle of Manila canceled other Masses throughout the archdiocese to enhance turnout. The crowd was so dense in spots that people passed hosts to fellow worshipers unable to reach priests distributing Communion.

The government estimated total crowd size at 6 million-7 million people. According to the Vatican spokesman, Jesuit Father Federico Lombardi, that would be the largest number of people ever to gather to see a pope. A Mass with St. John Paul II in the same place 20 years earlier is believed to have drawn 4 million-5 million people, often described as the largest live crowd in history.

The Mass was celebrated on Santo Nino Day, or the feast of the Holy Child Jesus, one of the most popular feast days in the Philippines. Many of those who walked great distances down closed roads to get to Rizal Park held statues of Santo Nino.

For his final scheduled public talk in the country, Pope Francis stuck to his prepared English text and did not improvise in Spanish, as he had done at several emotional points during the visit. Yet his voice rose with emphasis during the passage about protecting the family.

Those words echoed his warning, during a Jan. 16 meeting with Filipino families, against “ideological colonization that tries to destroy the family” through such practices as same-sex marriage and contraception.

In his homily, Pope Francis said Christians “need to see each child as a gift to be welcomed, cherished and protected. And we need to care for our young people, not allowing them to be robbed of hope and condemned to life on the streets.”

The pope praised the Philippines, whose population is more than 80 percent Catholic, as the “foremost Catholic country in Asia,” and said its people, millions of whom work abroad, are “called to be outstanding missionaries of the faith in Asia.”

Yet he warned the developing nation, one of Asia’s fastest-growing economies, against temptations of materialism, saying the devil “hides his snares behind the appearance of sophistication, the allure of being modern, like everyone else. He distracts us with the promise of ephemeral pleasures, superficial pastimes. And so we squander our God-given gifts by tinkering with gadgets; we squander our money on gambling and drink.”

Pope Francis, who had urged a group of young people earlier in the day to address the challenge of climate change through dedication to the environment, told Mass-goers human sinfulness had “disfigured (the) natural beauty” of creation.

Other consequences of sin, the pope said, were “social structures which perpetuate poverty, ignorance and corruption,” problems he had emphasized in his Jan. 16 speech at Manila’s presidential palace. 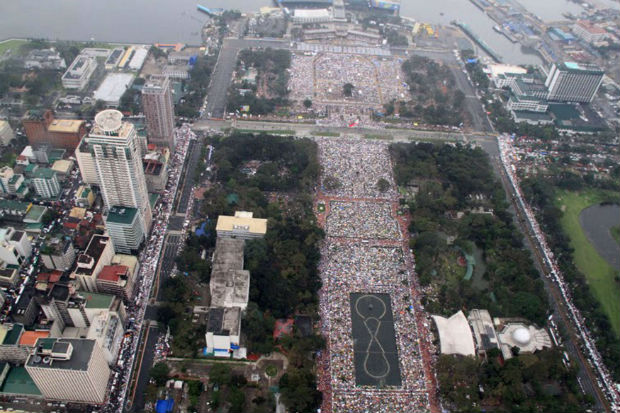 An aerial view shows pilgrims gathering to hear a Mass celebrated by Pope Francis at Rizal Park in Manila, Philippines, Jan. 18. The view shows only a portion of the Mass site, which a local church official said was more than a mile long. (CNS photo/Philippine Air Force/Handout via Reuters)