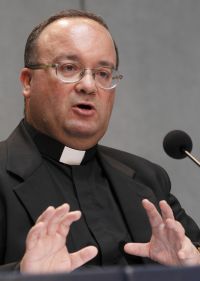 Auxiliary Bishop Charles J. Scicluna, 55, of Malta was appointed president of the new board of review within the Congregation for the Doctrine of the Faith.

The Vatican announced his appointment as well as the names of the board’s eight other members Jan. 21.

Before being named an auxiliary bishop in Malta in 2012, Bishop Scicluna spent 10 years as promoter of justice at the doctrinal congregation, handling accusations of clerical sex abuse. He said the church must respond to allegations clearly and not react with “inertia, a culture of silence or repression.”

Since being named to Malta, he has continued to troubleshoot for the Vatican. In 2014, he traveled to Geneva to testify before the U.N. Committee on the Rights of the Child, and in April he traveled to Scotland to collect testimony in a case against Cardinal Keith O’Brien, the former archbishop of St. Andrews and Edinburgh, who resigned in 2013 after admitting to sexual misconduct.

In April, the lone clerical abuse survivor nominated by Pope Francis to sit on the new Pontifical Commission for the Protection of Minors said Bishop Scicluna really “got it” when it came to addressing clerical sexual abuse.

In November, Pope Francis established the new board of review to speed up the process of hearing and ruling on appeals filed by priests laicized or otherwise disciplined in sexual abuse or other serious cases.

Members of the doctrinal congregation had been examining an average of four or five appeals, mostly in sex abuse cases, at each of their monthly meetings; the substantial number of appeals and the need to examine them more quickly led to the institution of the board to judge cases involving priests, said Cardinal Pietro Parolin, Vatican secretary of state, in a note presenting the text of the papal order in November.

The new members of the board are:

— Polish Cardinal Zenon Grocholewski, 75, prefect of the Congregation for Catholic Education and current member of the Congregation for the Doctrine of the Faith. He spent almost 27 years working in the Supreme Court of the Apostolic Signature, which functions mostly as an appeals court, hearing challenges to previous judgments made by marriage tribunals, Vatican congregations and local bishops. One of the most widely publicized Apostolic Signature rulings under Cardinal Grocholewski’s tenure as secretary was the court’s initial reversal of a decision by a U.S. bishop to suspend a priest accused of sexually molesting a minor. Then-Bishop Donald W. Wuerl of Pittsburgh immediately requested the tribunal re-hear the case, which it did, and the bishop’s decision was upheld.

— Italian Cardinal Attilio Nicora, 77, a canon lawyer and one of Italy’s leading experts on church-state legal questions. He was a top expert on legal affairs for the Italian bishops’ conference, and he used to head the Vatican’s most important economic and investment agency as well as its financial watchdog agency: the Financial Intelligence Authority.

— Italian Cardinal Francesco Coccopalmerio, 76, a member of the Congregation for the Doctrine of the Faith and an expert in canon and civil law. He is president of the Pontifical Council for Legislative Texts, which is responsible for the interpretation of canon law. The council has been working to revise a section of the Code of Canon Law to make clearer and more effective existing procedures and penalties for effectively dealing with allegations of clerical sexual abuse.

— Italian Cardinal Giuseppe Versaldi, 71, president of the Prefecture for the Economic Affairs of the Holy See. He is a retired professor of canon law and psychology and was part of Vatican-appointed team investigating the centers and institutions of the Legionaries of Christ, whose late founder, Father Marcial Maciel Degollado, was accused of sexually abusing minors and fathering children.

— Spanish Bishop Juan Arrieta Ochoa, 63, secretary of the Pontifical Council for Legislative Texts, who has also worked as a canon lawyer and canonical consultant to several other Vatican offices.

The two “substitute” or deputy members are:

— Spanish Cardinal Julian Herranz, 84, a top expert in canon law, who served at the Council for Legislative Texts, first as secretary from 1983 to 1994, then as president from 1994 to 2007. In 2002, as U.S. cardinals and bishops were discussing new norms for dealing with sex abuse cases, Cardinal Herranz criticized attempts to require church leaders to report all abuse accusations to civil authorities and turn over relevant documents, reflecting thinking at the time that bishops should not be acting as voluntary reporting agents for the state. At that time, Cardinal Herranz also argued that the church’s own means of dealing with clerical sex abusers should not be short-circuited by policies adopted out of bishops’ fear of civil liability. Cardinal Herranz later served on a U.S.-Vatican commission that hammered out revisions to the norms. In the end, he said, the norms established rigorous procedures for offenders and offered greater protection to children.

— Italian Bishop Giorgio Corbellini, 67, a canon lawyer and president of the Vatican human resources office. He is also president of the disciplinary commission of the Roman Curia, a commission that evaluates disciplinary action taken against Vatican employees. Bishop Corbellini has worked at the Vatican since 1985, when he was assigned to the Pontifical Council for Legislative Texts.