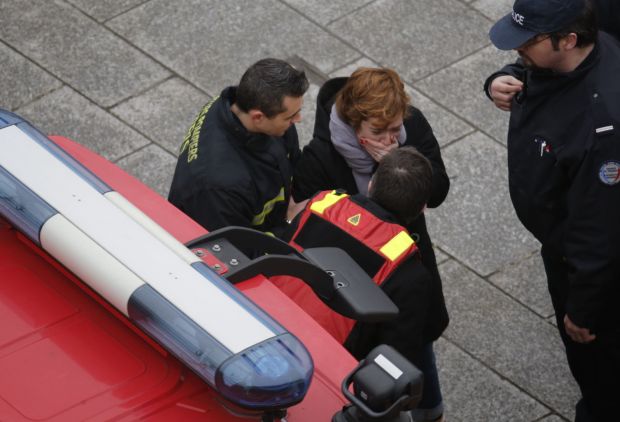 A distressed woman is assisted by firefighters after a shooting at the Paris offices of Charlie Hebdo, a satirical newspaper, Jan. 7. (CNS photo/Christian Hartman, Reuters)

VATICAN CITY (CNS) — The morning after 12 people were shot to death and 11 others injured at the Paris office of a satirical weekly newspaper, Pope Francis dedicated his early morning Mass to the victims and their families.

At the beginning of the Mass Jan. 8, he told the small congregation that the attack in Paris Jan. 7 was a reminder of “the cruelty man is capable of. Let us pray at this Mass for the victims of this cruelty — there are so many! And, we pray also for the perpetrators of such cruelty that the Lord will change their hearts.”

French police were searching for two heavily armed men believed to be those who burst into the offices of Charlie Hebdo weekly during an editorial meeting. Among the dead were the weekly’s editor and four cartoonists, who have been criticized in the past by Muslim groups for their caricatures of the Prophet Muhammad.

French President Francois Hollande called the slayings “a terrorist attack without a doubt.”

Although he met personally Jan. 8 with Cardinal Andre Vingt-Trois of Paris, Pope Francis also sent a telegram to the cardinal expressing his condolences to the victims’ families and the entire French nation.

Through his prayers, the message said, the pope shares “the pain of the bereaved families and the sadness of all the French” and asked God to comfort and console the injured. He also reiterated his condemnation of such violence and asked God for peace.

Hours after the attack, Pope Francis condemned the killings and called on all people of goodwill to work to stem “the spread of hatred and every form of violence, both physical and moral, that destroys human life, violates the dignity of persons and radically undermines the fundamental good of peaceful coexistence among persons and peoples no matter their nationality, religion or culture.”

“The Holy Father expresses the firmest condemnation of the horrible attack,” said a statement from the Vatican spokesman, Jesuit Father Federico Lombardi, who added that the killings had deeply disturbed “all persons who love peace, well beyond the borders of France.”

“Whatever the motivation might be, homicidal violence is abominable, is never justifiable,” the Vatican statement said. “Every instigation to hatred should be rejected, respect for the other cultivated.”

Father Lombardi said Pope Francis expressed his “spiritual solidarity and support” for all those “committed to serving peace, justice and law, in order to heal the deepest sources and causes of hatred, in this painful and dramatic moment, in France and every part of the world marked by tension and violence.”

The office of Cardinal Vingt-Trois released a statement expressing the cardinal’s “horror” at the attack and “his deep compassion for the families and friends of the victims. With the Catholics of Paris, he condemns this act of barbarism and calls for people to work ever more diligently to build relationships of peace and mutual respect in our society.”

“This society, made up of all manner of diversities, must continually work to construct peace,” said the Jan. 7 statement. “The barbarism shown in this killing wounds us all, and in this situation, when anger may envelop us, we must devote attention more than ever to our weakened fraternity.”

News of the attack came as Pope Francis was holding his weekly general audience; among the groups present for the audience and a brief conversation with the pope were four imams from France.

Tareq Oubrou, the head of the mosque in Bordeaux, said French Muslims were “traumatized” by the attack and feel their faith is being “taken hostage by crackpots.”

The imams and French Cardinal Jean-Louis Tauran, president of the Pontifical Council for Interreligious Dialogue, issued a joint statement Jan. 8 saying they shared Pope Francis’ sentiments and joined him in “denouncing cruelty and blind violence.”

“We invite believers to demonstrate, through friendship and prayer, their human and spiritual solidarity with the victims and their families,” the statement said.

Given the fact the targets were employees of a newspaper, the cardinal and the imams also said that “without freedom of expression, the world is in danger.”

“Given the impact of the media” on society and on individuals, they said, religious leaders of every faith must “offer information respectful of religions, their followers and their practices, thus promoting a culture of encounter.”

French media reported Jan. 8 that Muslim places of worship had been raked by gunfire overnight at Le Mans and Port-la-Nouvelle, without casualties, while a female police officer had been shot dead in southern Paris Jan. 8 during the manhunt for the terrorists.

Contributing to this story were Francis X. Rocca at the Vatican and Jonathan Luxmoore in Oxford, England.

NEXT: Cardinals dedicate new wing of U.S. seminary in Rome