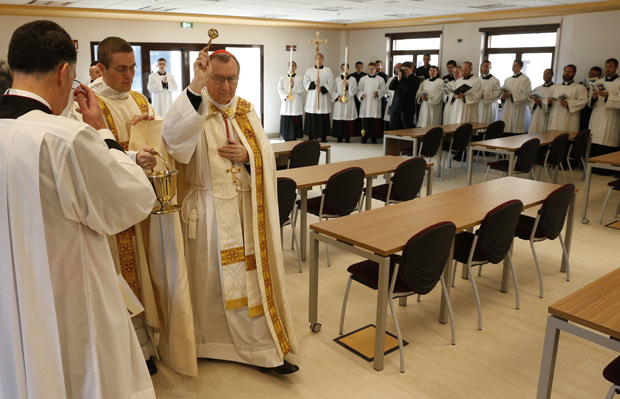 VATICAN CITY (CNS) — Five cardinals dedicated a new wing of the U.S. seminary in Rome, its first major addition in more than 60 years.

Italian Cardinal Pietro Parolin, who as secretary of state is considered the highest Vatican official under the pope, led the dedication ceremony of the building at the Pontifical North American College Jan. 6.

Speaking to reporters after the ceremony, Cardinal Parolin noted the large enrollments at the college, the largest U.S. Catholic seminary, where 256 men are currently preparing for the priesthood.

The presence of so many seminarians “means that, at least in some areas, vocations are growing,” the cardinal said. “Looking at the world scenario, this is very encouraging news.”

Cardinal Parolin was joined for the ceremony by three U.S. cardinals: Cardinal James M. Harvey, archpriest of the Basilica of St. Paul Outside the Walls; Cardinal Edwin F. O’Brien, grand master of the Equestrian Order of the Holy Sepulchre; and Cardinal Donald W. Wuerl of Washington. Australian Cardinal George Pell, prefect of the Secretariat for the Economy, also took part.

Cardinal Parolin led a procession of bishops, priests and seminarians down from the top floor of the 10-story building. On each floor, one of the cardinals read a prayer and sprinkled holy water over the new facilities, then the rest of the assembly sang a hymn. 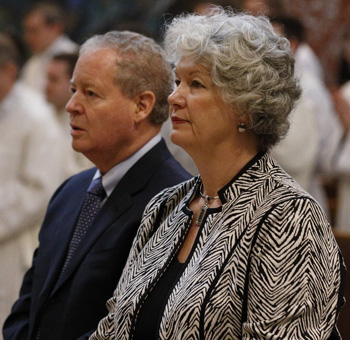 James and Miriam Mulva of Bartlesville, Okla., who donated $8.5 million for a new building and other improvements at the Pontifical North American College, attend a Mass during the dedication of the new building in Rome Jan. 6. (CNS photo/Paul Haring)

Afterward, Cardinal Parolin praised the “beauty of this liturgy” and the highly organized character of the event as especially characteristic of the church in the U.S.

The new wing, which was built in 18 months, extends the college’s space by 36,000 feet, including soundproof rooms for practicing liturgies and a reading room with a 360-degree view of Rome.

A chapel named for St. John Paul II contains a relic of the late pope’s cassock from the day in 1981 when he was shot in St. Peter’s Square. Stained-glass windows portray St. John Paul, Blessed Teresa of Kolkata, Archbishop Fulton J. Sheen and Father Michael J. McGivney, founder of the Knights of Columbus.

James and Miriam Mulva of Bartlesville, Oklahoma, made an $8.5 million gift to the seminary to fund the new building, whose energy-saving features including lighting that self-regulates according the level of sunlight. 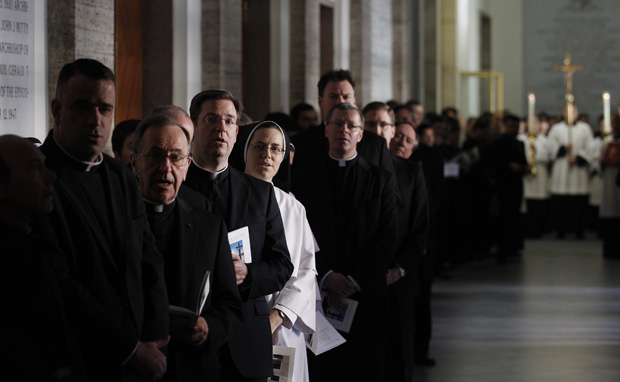 NEXT: Youngest cardinal-designate comes from family of catechists