Pope thanks Catholics for helping Haiti, says much more left to do 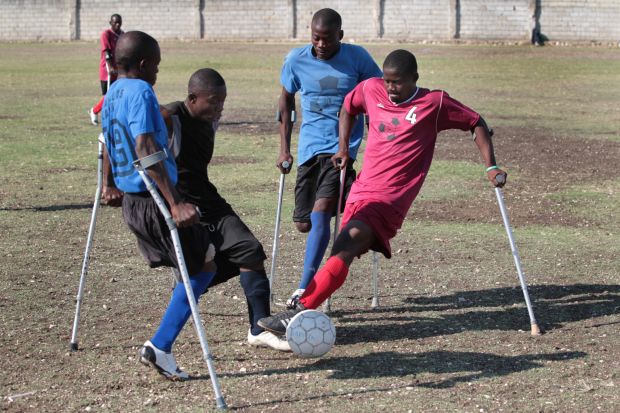 Wilfrid Macena, in red, who lost a leg in the Jan. 12, 2010, earthquake, battles for the ball during an early morning practice in 2011 on a soccer field in Port-au-Prince, Haiti. Macena and two other members of a Haitian amputee soccer team gave Pope Francis a soccer jersey and ball signed by team members during a Jan. 10 papal audience marking the fifth-year anniversary of the magnitude-7 earthquake. (CNS photo/Bob Roller)

VATICAN CITY (CNS) — Pope Francis thanked Catholics worldwide for helping people in Haiti recover from a devastating earthquake, but said “there is still much work left to do.”

Marking the fifth anniversary of the magnitude 7 earthquake that destroyed large parts of Haiti Jan. 12, 2010, the pope met with international and church-based agencies, bishops and religious involved in offering assistance to those affected by the tragedy. The Haitian government maintains that 316,000 people were killed, more than 300,000 were injured and 1.5 million were displaced.

Those attending the Jan. 10 papal audience were taking part in a one-day conference the same day organized by the Pontifical Council Cor Unum and the Pontifical Commission for Latin America to revive interest and commitment to reconstruction in Haiti.

The pope told participants that continued aid must focus on assisting the whole human person, which includes meeting their spiritual and human needs as well as material assistance.

Catholic charitable activity must also be done in communion with the rest of the church, he said, “because none of us works for himself, but in the name of Christ, who showed us the path of service.”

“It would be a contradiction to live charity separately,” he said, because charity is always done together as one body, each member helping the whole.

Among those who attended the Vatican conference were Archbishop Joseph E. Kurtz of Louisville, Ky., president of the U.S. Conference of Catholic Bishops, and Archbishop Thomas G. Wenski of Miami, the chairman of the USCCB’s Haiti Advisory Group.

“Our conference and individual parishes and dioceses throughout the United States have long-standing and deep relationships with counterparts in Haiti,” Archbishop Kurtz said in a Jan. 9 written statement.

The day of reflection on solidarity with Haiti, called for by Pope Francis, was a good way to talk about the ongoing needs there and “discuss the ways in which sister churches have been walking with the church in Haiti,” he said.

Archbishop Wenski said in the same statement that parish and diocesan “twinnings” are a strong sign of communion among the churches.

Archbishop Wenski acknowledged the increased involvement of parishes and dioceses in the United States in supporting awareness and action, and said, “The reconstruction of the church infrastructure in Haiti, as modest as it may seem, has made significant progress since the 2010 earthquake.”

Since a special collection for Haiti was taken in dioceses across the United States shortly after the earthquake, $21 million has been allocated for reconstruction projects to date, reported the USCCB Subcommittee for the Church in Latin America.

Also attending the Vatican conference were Supreme Knight Carl Anderson and three young Haitian men who survived the earthquake of 2010 and received help from the Knights of Columbus. 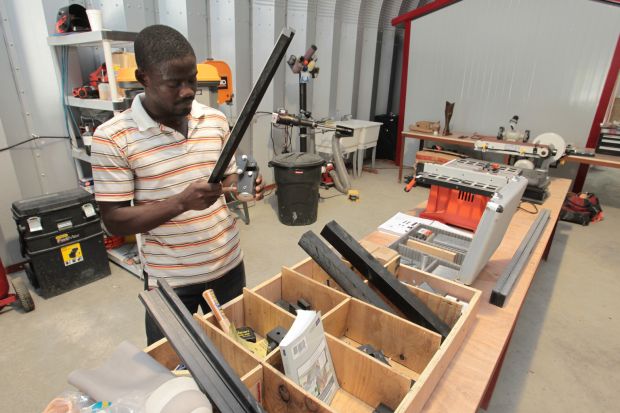 Wilfrid Macena, who lost a leg in the Jan. 12, 2010, earthquake, works in the Prosthetic and Orthotic Laboratory in 2011 in Port-au-Prince, Haiti. Macena and two other members of a Haitian amputee soccer team gave Pope Francis a soccer jersey and ball signed by team members during a Jan. 10 papal audience marking the fifth-year anniversary of the magnitude-7 earthquake. (CNS photo/Bob Roller)

Wilfrid Macena, Mackenson Pierre and Sandy J.L. Louiseme received prosthetic and rehabilitation care through Healing Haiti’s Children, a program sponsored by the Knights and the University of Miami-affiliated Project Medishare. The partnership offered free prosthetics and rehabilitation for all children and young adults who lost a limb in the earthquake. So far some 1,000 people have received free prosthetic limbs through the service.

The three men, who are members of a Haitian amputee soccer team, named Zaryen, which means tarantulas, gave the pope a soccer jersey and ball signed by team members.

“We are profoundly grateful to the Holy Father for calling this conference and for remembering the Haitian people, who are too often forgotten,” Anderson said in a written statement Jan. 10.

“The members of team Zaryen represent both the loss and the resilience of the Haitian people, who have both endured and overcome so much since the earthquake.”

PREVIOUS: At baptisms, pope urges prayers for moms who can’t feed their kids