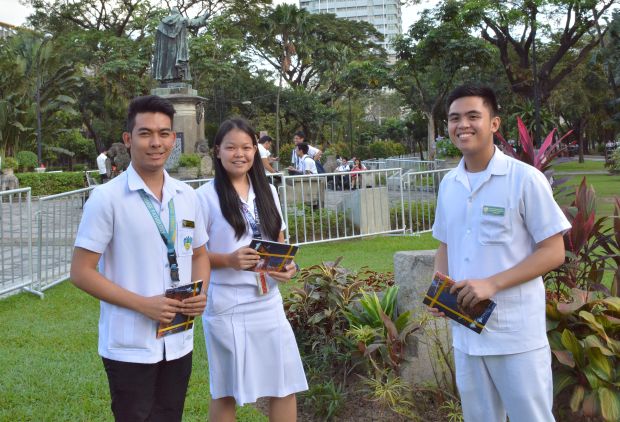 University of Santo Tomas youth leaders Arden Romanillos, Maria Celina Castro and Raymond Naguit pose for a photo in Manila, Philippines, Jan. 12. The youth leaders will be participating in a program with Pope Francis on campus during his visit to the Philippines Jan. 15-19. (CNS photo/Simone Orendain)

MANILA, Philippines (CNS) — Youth leaders at the University of Santo Tomas in Manila were preparing spiritually for Pope Francis visit, which they said would be a blessing for the people of the Philippines.

“I have to examine my conscience first and check if my actions are reflective of the mercy and compassion that the pope is advocating for,” said Raymond Naguit, 22, a medical student and vice chair of the university’s Central Commission on Elections.

The theme of the papal visit to the Philippines is “Mercy and Compassion.” Organizers said the main reason Pope Francis is coming is to “be one” with the victims of two major disasters that hit the central Philippines toward the end of 2013. Church leaders said the pontiff felt compassion for and wanted to bring the joy of the Gospel to the suffering.

“He challenges us to imitate Christ, the Good Shepherd, who is mercy and compassion,” says the Philippine papal visit website.

Maria Celina Castro of the Dominican Network Youth Group Philippines specializes in disaster relief work. For the 19-year old education major, the pope coming to the Dominican-run university is “a blessing” for students and the rest of the country.

“Because just his mere presence would somehow heal the emotional and psychological distress (from recent disasters) of the people in the country,” she told Catholic News Service.

In November 2013, the most powerful tropical cyclone to hit land struck the Eastern Visayas, leaving more than 7,300 dead or missing and destroying more than a million houses. Less than a month before that, a magnitude-7.1 earthquake shook some provinces also in the area, killing several hundred and displacing thousands.

Arden Romanillos, president of Rehabilitation Sciences Student Council at the university, said, given the chance, he would say three words to the pope: “Pray for me.”

Romanillos, 20, told CNS the disaster-prone Philippines is seeking that grace from Pope Francis.

“That would be a concrete blessing, not just for me but … for the whole Filipino people,” he said. “That is one thing we Filipinos really need, for the pope to bless us and to pray for us, as we celebrate and (join together) in praying for him as well.”

Romanillos is heading up the volunteer support for the security detail during the pope’s visit. And while he said he is “filled with joy,” over the visit, keeping Pope Francis safe remains a major concern.

Government officials said about 40,000 troops, national police and other security enforcement officers will be on duty during the visit. The military’s chief of staff had expressed concern that enthusiastic crowds in this overwhelmingly Catholic country might injure the pope, who likes to go directly to the people. They expect up to 6 million people to attend the open-air Mass at a Manila park Jan. 18, the same day he meets with about 6,000 young people from across the country at the university.

The students also expressed concern over opportunists who might try to capitalize on the pope’s visit. Naguit said with the presidential election coming up, some politicians might try to attach their messages to those of the “very influential” pope to try to sway their constituents.

Also, Castro pointed out that promotional merchandize for the visit is being sold. While non-profit groups such as Caritas Manila and Radio Veritas are seeking donations for the shirts and mementos to raise funds for their work, other material is purely commercial.

“I’ve heard that the pope doesn’t want use his image or his face as part of the merchandize because his visit in the Philippines is not about himself but about God or about the Lord, about Catholic religion itself,” Castro said. “It’s not for the Filipino people to patronize him but to renew the faith of the Filipinos and of the youth.”

PREVIOUS: Pope thanks Catholics for helping Haiti, says much more left to do