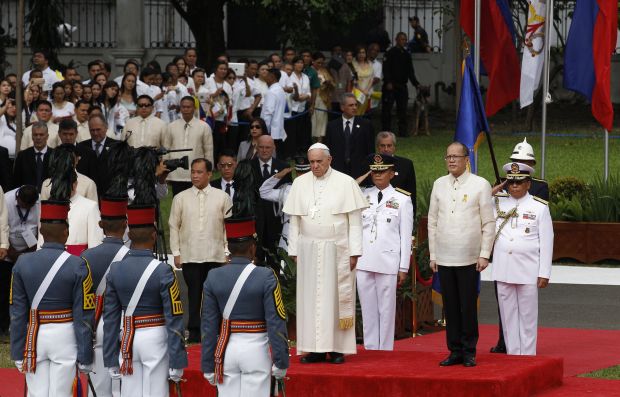 MANILA, Philippines (CNS) — In a nation plagued repeatedly by corruption scandals, Pope Francis urged “everyone, at all levels of society, to reject every form of corruption, which diverts resources from the poor.”

After an official welcoming ceremony Jan. 16 at the Malacanang Palace, the residence of the Philippine president, the pope addressed President Benigno Aquino III, government officials and diplomats representing their governments in Manila.

Telling the government leaders and diplomats that he knew their jobs are not easy and that Asian countries face complex challenges, he also insisted “it is now, more than ever, necessary that political leaders be outstanding for honesty, integrity and commitment to the common good.”

Citing “the moral imperative of ensuring social justice and respect for human dignity,” Pope Francis emphasized “the duty to hear the voice of the poor. It bids us break the bonds of injustice and oppression, which give rise to glaring, and indeed scandalous, social inequalities.”

Whatever technical, political plans a government or party has, he said, “reforming the social structures which perpetuate poverty and the exclusion of the poor first requires a conversion of mind and heart.”

In his speech to the pope, Aquino accused some unnamed Philippine church leaders of being “silent” in the face of corruption under the government of his predecessor, Gloria Macapagal-Arroyo.

“One would think that the church would be our natural ally,” the president said.

Cardinal Luis Antonio Tagle of Manila told reporters that Aquino was speaking “from a deeply personal and deeply political experience.” He added, though, that Aquino, “in many speeches since he become president, always refers to the ‘previous administration'” and the problems it has created.

Pope Francis said the values needed to fight corruption and to establish justice are fostered in the family.

“It is in the family that children are trained in sound values, high ideals and genuine concern for others,” the pope said. “But like all God’s gifts, the family can also be disfigured and destroyed. It needs our support.

But all of those values can be upheld if a nation is filled with people who have learned to cherish those values in their families, Pope Francis said. Strong families pass on the solid values needed to “bring about a culture of integrity — one which honors goodness, truthfulness, fidelity and solidarity as the firm foundation and the moral glue which holds society together.”