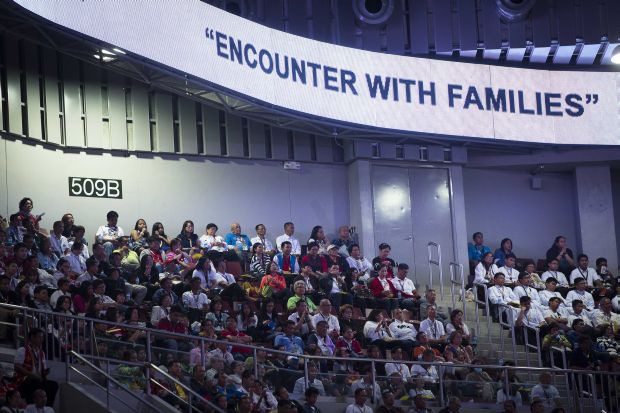 People listen to Pope Francis speak during a meeting with families at the Mall of Asia Arena in Pasay City, Philippines, Jan. 16. (CNS photo/Tyler Orsburn)

MANILA, Philippines (CNS) — Appealing to the traditional values of Filipino Catholic families, Pope Francis made one of his strongest calls as pope against movements to recognize same-sex unions as marriage.

“The family is also threatened by growing efforts on the part of some to redefine the very institution of marriage,” the pope said Jan. 16, hours after warning that Philippine society was “tempted by confusing presentations of sexuality, marriage and the family.”

“As you know, these realities are increasingly under attack from powerful forces which threaten to disfigure God’s plan for creation and betray the very values which have inspired and shaped all that is best in your culture,” he said.

Pope Francis made his remarks at a Mass in Manila’s cathedral and then at a meeting with families in the city’s Mall of Asia Arena.

At the latter event, the pope called on his listeners to resist “ideological colonization that threatens the family.” The Vatican spokesman, Jesuit Father Federico Lombardi, said later that the pope was referring to same-sex marriage, among other practices.

Cardinal Luis Antonio Tagle of Manila, who was present at the reporters’ briefing, cited claims by African bishops that foreign aid to their countries is sometimes offered on the condition that they accept “alien” views of sexuality and marriage.

Civil law in the Philippines does not recognize marriages or unions between people of the same sex.

The pope’s comments came less than a week after a speech to Vatican diplomats in which he criticized “legislation which benefits various forms of cohabitation rather than adequately supporting the family for the welfare of society as a whole,” saying that such legislation had contributed to a widespread sense of the family as “disposable.”

In November, Pope Francis told an interreligious conference on traditional marriage that preserving the family as an institution based on marriage between a man and a woman is not a political cause but a matter of “human ecology,” since “children have the right to grow up in a family with a father and mother capable of creating a suitable environment for the child’s development and emotional maturity.”

As archbishop of Buenos Aires, then-Cardinal Jose Maria Bergoglio opposed same-sex marriage in Argentina, calling it an “anti-value and an anthropological regression” and “destructive of the plan of God,” and writing that it expressed the “envy of the devil.” But he did not repeat such statements following his election as pope.

When asked why he had not spoken about Brazil’s legalization of abortion and same-sex marriage during his July 2013 trip to the country, the pope said the “church has already spoken quite clearly on this. It was unnecessary to return to it.”

In an interview published in September 2013, Pope Francis told Jesuit Father Antonio Spadaro: “We cannot insist only on issues related to abortion, gay marriage and the use of contraceptive methods. This is not possible. I have not spoken much about these things, and I was reprimanded for that. But when we speak about these issues, we have to talk about them in a context. The teaching of the church, for that matter, is clear and I am a son of the church, but it is not necessary to talk about these issues all the time.”

The pope’s latest statements come during a year of preparation for the October 2015 world Synod of Bishops on the family, following an October 2014 extraordinary synod on the same topic.

At the earlier gathering, a midterm report stirred controversy with remarkably conciliatory language toward people with ways of life contrary to Catholic teaching, including those in same-sex unions. While such unions present unspecified “moral problems,” the document stated, they can exemplify “mutual aid to the point of sacrifice (that) constitutes a precious support in the life of the partners.”

That language was absent from the final report, which quoted a 2003 document from the Congregation for the Doctrine of the Faith: “There are absolutely no grounds for considering homosexual unions to be in any way similar or even remotely analogous to God’s plan for marriage and family.”

In a December interview with Argentine journalist Elisabetta Pique, Pope Francis described the midterm report as “merely a first draft,” and said it had mentioned “positive factors” of same-sex unions in an effort to help families support their gay members.

“Nobody mentioned homosexual marriage at the synod; it did not cross our minds,” the pope said.