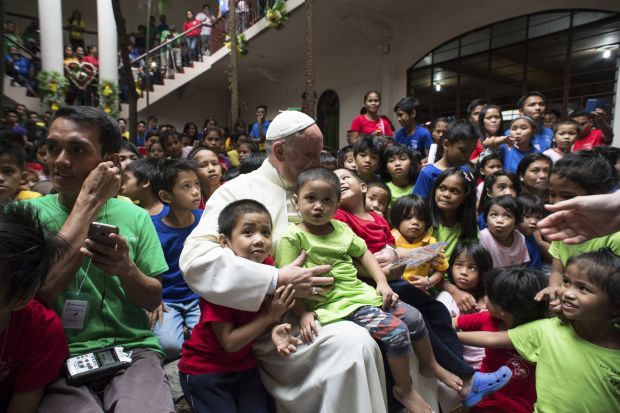 Pope Francis is pictured with youths at a home for former street children in Manila, Philippines, Jan. 16. (CNS photo/L'Osservatore Romano via Reuters)

MANILA, Philippines (CNS) — Pope Francis did not disappoint hundreds of former street children who were part of a massive campaign to show him one of the centers where they have found safety and love.

Although it was not in his official program, Pope Francis walked out of Manila’s Immaculate Conception Cathedral after Mass Jan. 16 and across the street to the Blessed Charles de Foucauld Home for Girls, which is run by the Tulay Ng Kabataan foundation.

Accompanied by Cardinal Luis Antonio Tagle, a frequent guest, the pope spent about half an hour with some 320 boys and girls and young adults from a number of TNK homes in metropolitan Manila.

“It was a beautiful, beautiful encounter,” Cardinal Tagle told reporters later. “You could see the Holy Father was in his element.”

The cardinal translated for the pope as several of the children approached and shared their stories, stories that often included horrible experiences of exploitation and abuse when they lived on the streets.

“You could see the attentiveness of the pope,” he said. Getting emotional himself, the cardinal said that, as he listened, the pope’s “eyes were getting cloudy and beginning to fill with tears. You could see he was trying to show his affection to the children, but at the same time trying to fathom these deep wounds and pain.”

When the children came up to touch and to hug the pope, he said, Pope Francis whispered to him that it was clear they yearned for a loving human touch, “the touch of a parent.”

The pope “assured the children that they are loved by God, that God is with them, and that they should not forget that.”

“These children — the poorest among the poor — are for sure the most vulnerable victims of our society, but they remain masters of joy, as one can see on their smiling faces,” the foundation’s director, 39-year-old Father Matthieu Dauchez, told Pope Francis.

In a statement issued after the visit, the center said that by taking the time to meet “many children who faced horrors of the street like begging, violence, drugs (and) prostitution,” Pope Francis demonstrated “that he is the pope of the forgotten.”

“This is awesome,” the statement quoted 10-year-old Alvin as saying. “He gave me a huge warm hug!”