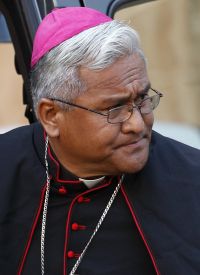 Bishop Soane Patita Paini Mafi of Tonga, an archipelago nation in the southern Pacific Ocean, arrives for the opening session of the extraordinary Synod of Bishops on the family at the Vatican in this Oct. 6, 2014, file photo. (CNS photoPaul Haring)

AUCKLAND, New Zealand (CNS) — The youngest cardinal-designate named by Pope Francis is the son and grandson of catechists — and will be Tonga’s first cardinal.

Cardinal-designate Soane Mafi, 53, was among 20 men Pope Francis announced would be made cardinals at a consistory in Rome Feb. 14.

When Cardinal-designate Mafi became bishop of Tonga in April 2008, he became the first diocesan priest to be bishop in the history of the nation, an archipelago with a land mass about four times the size of Washington, D.C.

Soane Patita Paini Mafi was born in Nuku’alofa, capital of Tonga, Dec. 19, 1961. He grew up in Tonga and joined a youth group at his parish in the settlement of Kolofo’ou, near the capital, on the main island, Tongatapu.

He studied at the Pacific Regional Seminary in Suva, Fiji.

After his priestly ordination, he spent four years at Ha’apai parish on an outer island. In 1995, he became vicar general of Tongatapu.

In an interview with Catholic San Francisco in 2008, then-Bishop Mafi said his bishop sent him for three years of study at then-Loyola College in Baltimore. After he graduated in 2000, he returned to Fiji to join a formation team training local priests.

After six years at the seminary, he received the call that the church would like him to be a bishop — an adjustment that he found difficult. He told Catholic San Francisco that at the time, being the bishop, the shepherd, was exciting and something that made him uneasy, “because I want to be myself. It’s kind of a mixed feeling, excited but at the same time overwhelming. Now I belong to everybody.”

He has served a nation in transition, a monarchy in which people are pushing for greater democratic rights.

Most Tongans are Methodist, but about 17,000 are Catholic. In 2012, there were said to be about 57,000 Tongans and Tongan-Americans in the United States, many in and around San Mateo and Oakland, California.

NEXT: Vatican sending $3.5 million to help church response to Ebola